From the Qing Empire to the People's Republic, China's worries about separatism run deep In a speech on the 150th anniversary of the birth of Sun Yat-sen -- seen by many as modern China's founding father -- President Xi Jinping pledged to "resolutely oppose" any attempt to divide the country.

"We will never allow anyone, any organization or political party to rip out any part of our territory at any time or in any form," he said, standing under a giant portrait of Sun.

A key tenet of Xi's rule has been his pledge to restore the country to greatness, undoing the "century of humiliation" during which the Qing Empire and later the Republic of China were laid low by foreign powers, with territories including Hong Kong, Manchuria and much of Shanghai shaved off into colonies and concessions.

It is "our solemn commitment to history and the people," Xi said in the 2016 speech, that China will never be torn apart again.

Concerns over separatism can be seen in the hardline policies adopted by Beijing in Xinjiang, Tibet and Hong Kong, as well as an increasingly aggressive stance towards the self-ruled island of Taiwan, which Xi has vowed to unify with the mainland -- by force, if necessary.

Yet such policies can often backfire. In Hong Kong, in particular, resentment towards Beijing has grown in recent years. In the past 12 months, as anti-government unrest was met with heavy policing, chants such as "Hong Kong independence, the only hope" were more commonly heard among parts of the protest movement.

Such talk is antithetical to China's leaders and the need to stamp out separatism has been given as a key justification for a new national security law. Advocating independence -- perhaps even discussion of the topic -- could soon become illegal.

Carrie Lam, the city's chief executive, has said the law will ensure "the long-term prosperity and stability of Hong Kong." 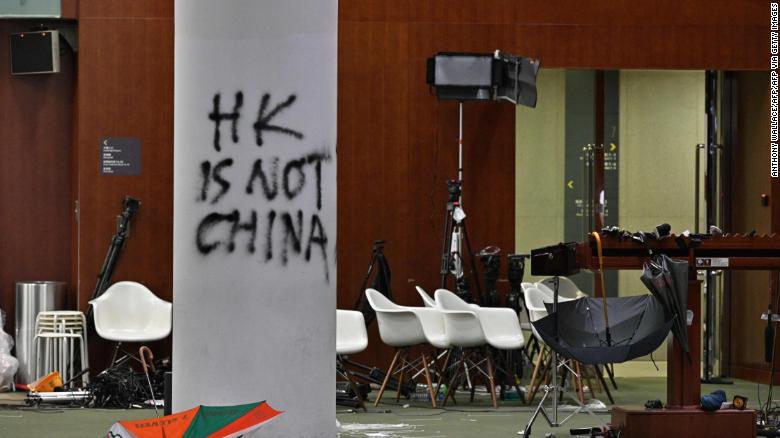 Graffiti and umbrellas are seen outside the main chamber of the Legislative Council during a media tour in Hong Kong on July 3, 2019, two days after protesters broke into the complex.

Abraham Lincoln, the 16th president of the United States, once argued that "no government proper ever had a provision in its organic law for its own termination," and even the separatist Confederate States of America did not include a provision in its constitution allowing any member to secede.

Anti-separatism is the norm worldwide, no matter the desires of many peoples around the world for a country of their own, or the oft-stated importance of "self-determination" as a principle of international law.

Indeed, the United Nations resolution establishing that principle, passed in 1960 amid a wave of decolonization, also states that "any attempt aimed at the partial or total disruption of the national unity and the territorial integrity of a country is incompatible with the purposes and principles of the Charter of the United Nations."

While Beijing and Moscow often blame Washington for supporting separatists in their own spheres of influence, US policy has often been equally pro-status quo. As Croatia held an independence referendum in 1991, the US State Department declared its commitment to the "territorial integrity of Yugoslavia within its present borders." That year, President George H.W. Bush warned Ukrainians seeking to separate from the creaking Soviet Union to avoid "suicidal nationalism," adding that "freedom is not the same as independence."

In 1996, Bush's successor, Bill Clinton, said Russia's brutal war in Chechnya was based on "the proposition that Abraham Lincoln gave his life for, that no State had a right to withdraw from our Union." And in 2014, Barack Obama personally lobbied in favor of Scotland voting to remain part of the United Kingdom.

This attitude, shared by almost every country in the world -- see Spain's heavy suppression of Catalan nationalism -- is part of why, "for all the political tumult of the last quarter century, the number, shape, and arrangement of countries on the world map has remained remarkably unchanged," writes Joshua Keating in "Invisible Countries: Journeys to the Edge of Nationhood."

"Since the end of the Cold War, a global norm has prevailed enforcing cartographical stasis, a freezing in place of the map as it existed at the end of the 20th century," Keating said. "This norm prevails even as ethnic and religious conflicts rage within the countries on the map." 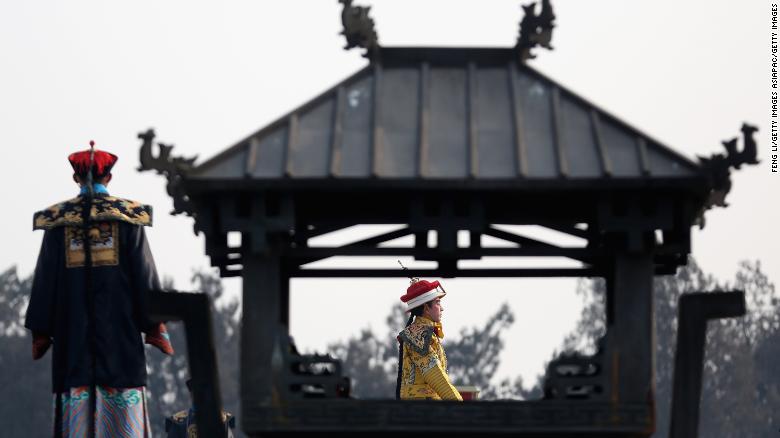 A performer plays the role of the Qing emperor during a re-enactment of an ancient Spring festival ceremony in Beijing. Much of China's modern borders are based on historical Qing conquest.

There is likely nowhere that this norm is stronger, or more strongly avowed, than in China.

Writing in the state-run China Daily this month, Liu Xiaoming, Beijing's ambassador to the UK, responded to London's concerns over growing Chinese aggression against Taiwan by saying the island "has been an inseparable part of China's territory since ancient times."

While the People's Republic of China has claimed sovereignty over Taiwan since its founding in 1949, the historical basis for Liu's claim can be challenged. Putting aside the fact that an island is a separable part of any country, what we now call Taiwan has experienced long periods outside of Chinese control, during rule by indigenous leaders and foreign colonizers, including the Dutch and Japanese.

The same is true for other parts of China often called inseparable by the government, including Tibet and Xinjiang. While these territories were also often under Chinese control or influence, it was as part of a wider imperial system wholly removed from modern conceptions of nationhood.

The border that China regards as inviolable today -- in the Himalayas, the South China Sea, and around the various "inseparable" territories at its periphery -- was not set until the late 18th century.

This was not due to some unique characteristic of the Chinese state, but through the same aggressive expansion that drove the growth of the British, Russian and Ottoman empires. Yet unlike these systems, writes historian Joseph Esherick, "China alone kept its territory basically intact as the Qing Empire was transformed, in 1911, into the Republic of China and, in 1949, into the People's Republic."

"Modern China's borders do not correspond to the historic boundaries of shared culture of the ethnic Chinese (or Han) people, nor to the boundaries of the premodern Chinese state," Esherick writes in "How the Qing became China."

"Fully half of the territory of present-day China was acquired by conquest during the Qing dynasty, a dynasty in which the ruling house was not Han Chinese but Manchu intruders from beyond the Great Wall. Most of this expansion took place only in the 18th century."

Sam Crane, chair of Asian studies at Williams College, said many states and territories which paid tribute to the Qing Empire and were under its sphere of influence would not have been regarded as part of China or Chinese civilization by Beijing.

"Imperial political control did not assume a singular, common, modern national identity," he said. "Once we get to 1949 the assertion that Tibetan and Uyghurs are part of the 'Chinese nation' is established to a much greater degree than under the Qing, and the attendant political stakes for demanding greater autonomy are, thus, much higher." 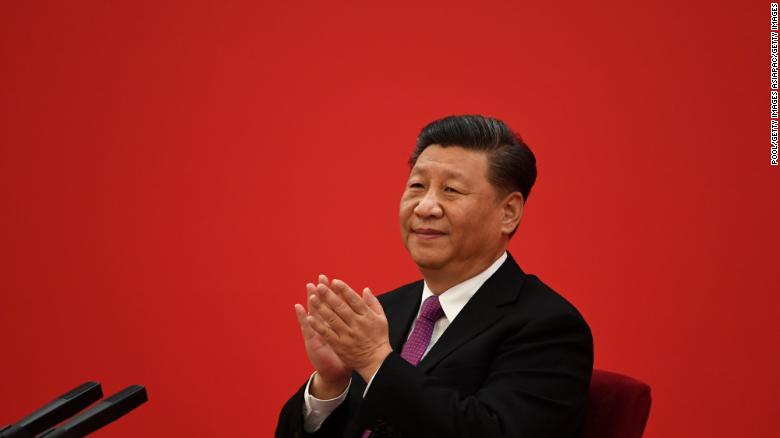 Chinese President Xi Jinping seen during a meeting in December 2019. Xi has advanced an increasingly nationalist policy as China's leader.

The modern idea of a nation state -- of a people united by common culture, language or ethnicity -- is traditionally pinned to a series of treaties in the mid-17th century, when the Holy Roman Empire recognized the independence of two non-monarchical states, Switzerland and the Netherlands

That marked, according to Keating, the point after which nation states increasingly became "the most significant units in international politics," becoming more important than rulers or empires amid a rise in nationalism continent-wide.

This did not take hold immediately and the break up of the great empires of Europe would not fully occur until the 20th century. In Asia, too, it was not until the Qing was challenged by the new assertive nation-states, particularly Britain, France, and Japan, that the conception of the empire began to shift in a similar direction.

Despite its adoption of imperial borders, since the fall of the Qing, China has reinvented itself fully as a modern nation state, advancing an encompassing idea of Chineseness -- a language and education system that encourages all within its borders to identify with being part of China.

Since the transition from socialism to a market-based economy in the 1980s, nationalism has emerged as a more important source of legitimacy for China's leaders, and many traditional symbols of the imperial past have been rehabilitated as part of this. Beijing's claims to speak for China and the Chinese people often extend well beyond the country's borders, conflating ethnicity with citizenship of the People's Republic.

The nation state concept has also been expanded backwards through time, so that former imperial territories like Tibet and Xinjiang, whose traditional peoples had little connection ethnically, linguistically or culturally to those in China's east, become "part of the country since ancient times," as Liu and other Chinese officials have argued.

Despite this, the borders of the Qing dynasty have not proven completely inviolable under republican rule. Following the collapse of the empire, Mongolia broke away, achieving formal independence from China in 1921 with the support of the Soviet Union. While some fringe nationalist Chinese figures do occasionally talk about reclaiming "outer Mongolia," Beijing has long recognized Ulaanbaatar and cultivated strong trade and diplomatic ties with its northern neighbor.

Writing about the global norm in favor of the status quo, Keating said "the assumption has been that if secession movements were allowed to succeed, it would open a Pandora's box of dangerous separatism."

This is perhaps especially true in China, where a single pro-independence domino could set off a cascade of territorial unrest.

Beijing has dealt with desire for independence in Xinjiang and Tibet, in part, by encouraging the mass migration of Han Chinese to both territories, as well as advancing Sinification policies in education, language and religion. The changing ethnic makeup of both areas makes it harder to argue for self-determination based on an idea of racial or cultural difference to China proper, with millions of Han Chinese living in both regions.

Hong Kong and Taiwan threaten the status quo in a different way. Both are majority Han Chinese, and antipathy towards Beijing in these areas is based not so much on nationalism but as a rejection of the mainland's political system. Were either territory to become fully independent, this could undermine the PRC's claims of legitimacy, based as it is on the idea that a historical China has always existed and always should.

Challenging this idea is controversial anywhere -- as much in China as in the UK over Scotland, Spain over Catalonia, or Russia and Ukraine over Crimea. But as Keating writes: "The existing countries in the world aren't good in and of themselves; they are useful to the extent that they help provide security and general welfare for the people who live within them as well as for the world as a whole.

"When they fail to do so, our first impulse should be to ask how they can be improved, not simply to state that they must be preserved."