David Attenborough: 'The collapse of our civilizations is on the horizon' Renowned nature broadcaster David Attenborough has told world leaders that climate change could lead to collapse of civilizations, and much of the natural world.

Speaking at the opening ceremony of the COP24 UN climate conference, in Katowice, Poland, Attenborough called climate change "our greatest threat in thousands of years."

In the weeks leading up to the event, the UN asked people to send their thoughts on climate change. Attenborough was there to represent the public, by taking the "People's Seat" at the conference.

He said: "The world's people have spoken. Their message is clear. Time is running out. They want you -- the decision makers -- to act now.

"Leaders of the world you must lead," he added. "The continuation of our civilizations and the natural world on which we depend is in your hands."

In an interview from the conference with CNN's Christiane Amanpour, Attenborough spoke about the damage humans have inflicted on the planet.

"We have overrun it in a way that is unprecedented," he said. "No other creature in the world has had the effect on the planet that the human species has, and so we ought to be aware of what we've done and recognize the responsibility that we now have in our hands."

Asked about the United States, which President Trump has said will leave the Paris Agreement, Attenborough pleaded for the US to remain committed to fighting climate change.

COP stands for Conference of Parties. COP21, in 2015, led to the landmark Paris Agreement, a legally binding agreement to fight climate change, where countries committed to keep global warming well below two degrees Celsius above pre-industrial levels and, if possible, below 1.5 degrees.

Read: Climate conference in the heart of Poland's coal country

The conference ends on December 14. 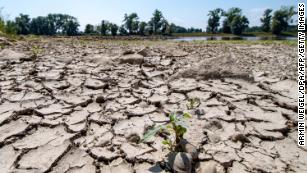 Why the Paris Agreement won't save us from climate change

The actor and former Governor of California said: "Every time you talk about America, you're right when you say that our leadership in Washington is a little bit backwards. But you're wrong when you say that America dropped out of the Paris Agreement.

"Because if you look a little bit beyond Washington you will see ... all the extraordinary work that is going on at a state and city level in America."

Earlier in the day, UN Secretary-General Antonio Guterres called the event "the most important gathering on climate change since the Paris Agreement was signed."

"We are still not doing enough, nor moving fast enough, to prevent irreversible and catastrophic climate disruption," Guterres continued, saying the majority of countries most responsible forgreenhouse gas emissions were behind in their efforts to meet their Paris pledges.

"What we need is more political will and more far-sighted leadership," he added. "This is the challenge on which this generation's leaders will be judged."

Referring to ongoing discussions around the Paris Rulebook, Gutteres said: "We cannot afford to fail in Katowice."

EC for dropping women participation provision in party from RPO