Blood smuggling in China: Why pregnant women are breaking the law to find out their babies' sex Custom officers stopped the middle-aged woman because of her strange, lumbering gait. They searched her and found vials of blood stashed in her bra, according to an official statement. Each one was labeled with a pregnant woman's name from China.

The passenger was crossing Futian port's inspection hall, a border post separating the mainland Chinese city of Shenzhen from Hong Kong, on a sweltering Friday in July 2017. 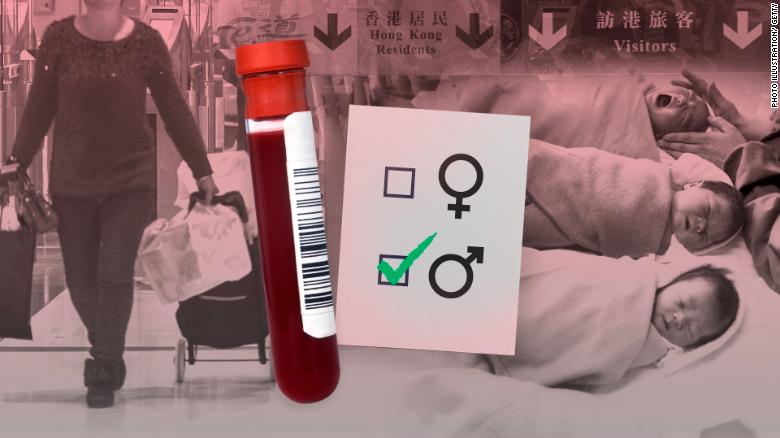 Hong Kong has become a hub for Chinese women who want to find out the gender of their unborn child by smuggling vials of blood into the city.

Four days later, they intercepted another woman, carrying what appeared to be a heavy backpack, according to the statement. Again, it was full of vials with pregnant women's blood. There were 203 of them, wrapped in plastic bags. Because of the heat, the blood had started to decay.

Hong Kong officials say the women were mules who admitted they had been paid 100 to 300 RMB ($14 to $42) to carry the sensitive material over the border.

More recently, in February 2019, a 12-year-old girl was stopped at Luohu port, another entry point into Hong Kong, with 142 blood samples hidden in her backpack. "Cross-border students basically don't bring anything other than books, stationery and snacks, so their schoolbags usually look lean. But we saw that hers looked so full that it might burst, so we scanned her bag," said a Luohu port staff member quoted by China's state-run People's Daily.

Blood smuggling to Hong Kong from mainland China, where sex testing is forbidden, has increased sharply over the past three years. The samples are sent to Hong Kong clinics to be tested for fetal DNA, which allows the future parents to find out the sex of their child.

Demand for China is strong. Despite the partial lifting of the one-child policy, many Chinese couples are opting to only have one baby, and when they do they want it to be a boy.

Desperate to find out whether they are having a boy or a girl, Chinese parents turn to intermediaries offering to send a blood sample across the border into Hong Kong to have it tested. Dozens of agencies offer this service on Weibo, a Chinese microblogging site similar to Twitter.

A sales representative for one such company told CNN that "women can start testing when they are 6-7 weeks pregnant." The agency, which CNN approached by contacting the WeChat account listed on its Weibo page, asks only for an ultrasound proving the pregnancy has reached the adequate stage and a blood sample.

"The woman can go to the hospital or ask a nurse to come to her home to draw blood," the representative said.

The pregnant woman is encouraged to hide the vial inside a plush animal or within boxes of packaged snacks, to avoid detection, and mail it straight to Hong Kong using the postal service. "We no longer hire manual couriers," the agent added. "It is too risky, as the government has cracked down recently on our activities."

The company, which has over 380,000 followers on Weibo, charges 3500 RMB ($490) for its services and the test takes about a week. It is carried out by a lab based in a remote part of Hong Kong, according to the agent, who CNN spoke to via WeChat messaging. 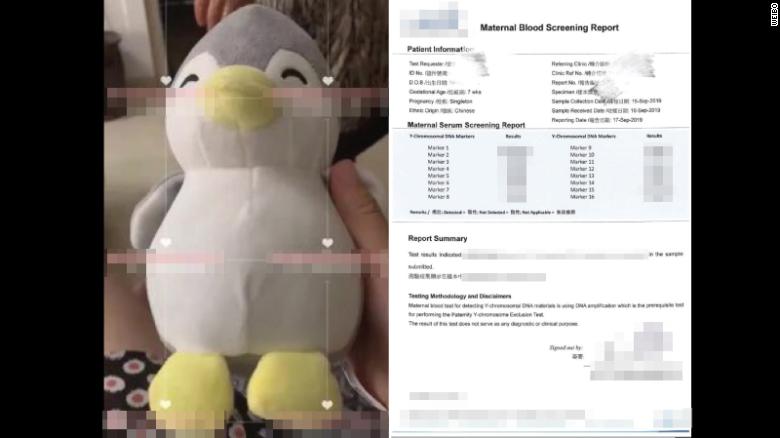 An online agent offering sex tests to pregnant women in China encourages her customers to hide their blood sample in a plush animal. To advertise her services, she posts the results of past tests on Weibo.

China's Population and Family Planning Law banned gender testing in 2002, to prevent a widening of the country's gender imbalance. In this country of 1.4 billion people, men outnumbered women by 32.7 million at the end of 2017, according to the National Bureau of Statistics.

Under China's one-child policy, which limited parents to one child, sex-selective abortions became widespread in the hope of securing a son -- from 1970 to 2017, this prevented 12 million girls from being born, according to a study published in May by National University of Singapore researchers.

The policy against having multiple children was partially scrapped in 2015, but many parents still forgo having more than one child because of the cost involved.

To get around the local ban on sex testing, some couples started sending blood samples across the border, into Hong Kong. This is illegal, with China's National Health and Family Planning Commission issuing a notice in 2017 banning the export of human blood.

Yet Hong Kong allows the importation of blood samples, provided they are not suspected of containing infectious agents and as long as a permit is secured, a spokeswoman from the city's Department of Health told CNN via email. Since 2015, the department has referred three cases involving laboratories conducting prenatal blood testing to the board for investigation, but all were dismissed "due to insufficient evidence," she said.

Hong Kong labs are only allowed to carry out tests if the patient's blood sample was referred to them by a registered medical practitioner, according to the Medical Laboratory Technologists' code of practice. But many labs choose to ignore this, said Kwok Ka-Ki, a member of Hong Kong's parliament, who is also a urologist.

"The Department of Health could rat them out by pretending to be a customer, but I have yet to see it launch a single undercover investigation," he told CNN. "The government prefers to keep its eyes half closed for fear of hurting Hong Kong's medical lab industry, which is big business."

So far none of the investigations launched by the Department of Health has led to a prosecution, according to a spokesperson who cited a lack of "sufficient evidence." She added that any complaints against Hong Kong's medical labs are handled by the Medical Laboratory Technologists Board, their statutory body. 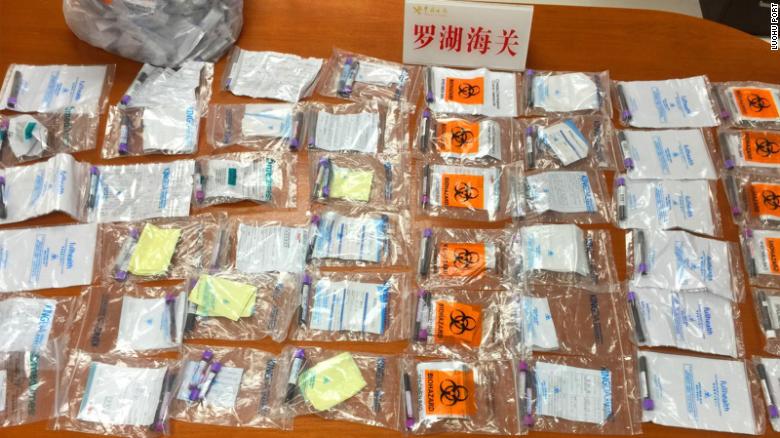 Customs officials in Shenzhen discovered 142 blood samples in a backpack carried by a 12-year-old girl. Each one was attached to an application form for sex testing, according to local media reports.

Hong Kong's thriving sex-testing industry was made possible by a blood test called non-invasive prenatal testing (NIPT), which was invented in the city. "Whereas a pregnant women previously had to wait until she was 4 to 5 months pregnant to find out the sex of her child, with NIPT she can know as early as 10 weeks," said Tom Shakespeare, a British sociologist who co-authored a study on the ethics of NIPT for the Nuffield Council on Bioethics.

This has strong implications for sex-selective abortions, Shakespeare added. "Terminating a pregnancy at 10 weeks is much more straightforward than at 18 weeks," he said.

NIPT is the brainchild of Chinese University of Hong Kong chemical pathology professor Dennis Lo. He first started looking for an alternative to amniocentesis and chorionic villus sampling -- the two invasive methods commonly used to test for chromosomal abnormalities in fetuses -- as a medical student at Oxford University in the late 1980s.

"Both of these tests carry a small risk of miscarriage, so I wondered if I could develop a safer way to test for genetic disorders," he said. Back then, the prevalent wisdom was that the mother's and child's circulatory systems were separate. But Lo had a hunch: what if some fetal DNA made its way into the pregnant woman's blood and could be detected?

In 1997, he published a paper in The Lancet proving the presence of the baby's DNA in its mother's blood plasma. But it took him a further 10 years to develop a working test for chromosomal abnormalities.

The test developed by Lo, which has an accuracy rate of 99%, was launched commercially in the United States in 2011 by a Californian company called Sequenom. Others were quick to follow. NIPT is now provided by a host of companies, including fellow Californian companies Illumina and Natera and Swiss pharmaceutical giant Roche.

It has completely transformed prenatal testing, making it safer for the baby and less invasive for the mother. "Approximately 7 million women have it every year worldwide," Lo said. The market for NIPT is expected to reach $3.9 billion in 2019, with a yearly growth rate of 13.5%, according to a MarketsandMarkets report.

NIPT is especially popular in China, even though it can't be used for sex testing. Chinese women are choosing to have children later in life, encouraged by their increasing participation in the workforce and the partial lifting of the one-child policy, which has led many women in their late 30s and early 40s to have a second child. That increases their risk of having babies with birth defects and makes them particularly receptive to prenatal genetic testing.

The local market is dominated by local players BGI and Berry Genomics. "In 2018, we tested 1 million blood samples using this method," said Berry Genomics CEO Zhou Daixing. "And the market is growing at a rate of 20 to 30% per year." Overall, 4 million Chinese women had NIPT last year, equivalent to about a quarter of all pregnancies, he added.

But whereas in most countries NIPT allows women to find out the sex of their baby as early as 10 weeks into their pregnancy, Chinese doctors have to withhold this information from mothers-to-be. This fuels the market for sex testing in Hong Kong, which has grown steadily since 2015, figures provided to CNN reveal.

As of September 2019, Hong Kong's Department of Health had investigated a total of 53 cases related to the importation of blood samples from China without a permit. There was only one case in 2015, but 17 in 2017 and 18 in 2018. As of September, there have been 12 cases.

"This is most likely just the tip of the iceberg," believes Kwok. "If you consider the large number of medical labs offering sex testing in Hong Kong, there must be dozens of blood smuggling cases every day." 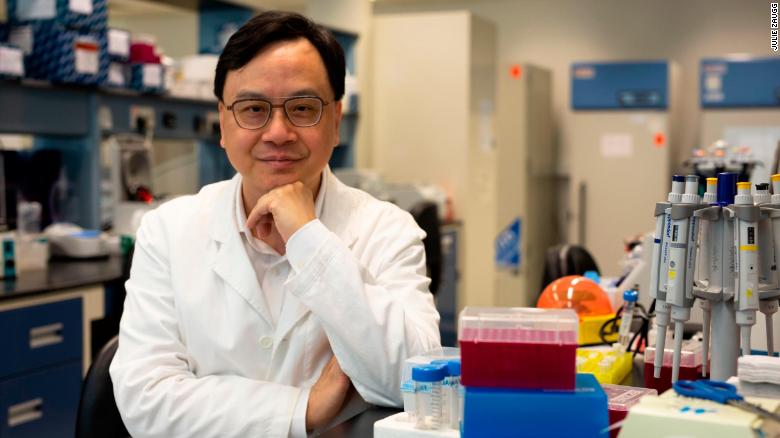 But sex testing is not the only application of NIPT. "We have demonstrated that this method enables us to sequence the whole genome of a fetus, which means it could be used to test for virtually any genetic disorder," Lo said.

Cystic fibrosis, hemophilia, thalassemia and congenital adrenal hyperplasia, which leads to an overproduction of male hormones, are some of the diseases which can now be predicted by NIPT, according to Lo. In the future, this technology may also be used to predict which pregnant women will develop pre-eclampsia, or have a premature baby, he added.

This opens up incredible possibilities. "If congenital adrenal hyperplasia is discovered early on in the pregnancy, the mother can take medication to suppress the production of male hormones, which would make it the first genetic disease ever to become treatable prenatally," Lo said.

But it also creates moral dilemmas. "If we find out a baby will get diabetes when he or she turns 40 or develop a cancer later in life, should we tell his mother and burden her with this knowledge before her child is even born?" Lo added.