People in the West are ignoring advice to stay home. That's because it's too confusing, one expert says In these times of extraordinary global turmoil, the weekend came as a welcome break for many. But anyone looking at the cyclists and runners crowding New York's parks, hikers thronging Britain's beauty spots and groups hanging out at California's busy beaches would have no clue that a dangerous pandemic has the world in its grip.

And as cases continue to soar, Italy offers clues to what may happen next.

When the outbreak in Italy began, authorities began by locking down affected "red zone" areas in the north. As cases continued to spread, the entire country was put on lockdown on March 9, with those who break the rules threatened with $232 fines and six months' prison time.

But hundreds of thousands of Italians have since been given police citations for flouting the ban, and a Chinese Red Cross official last week said Italy's measures -- among the strictest in Europe -- weren't strict enough. On Friday, the military was called in to help enforce the rules as deaths spiked and hospitals buckled under the strain. By the weekend, when Italy announced more than 1,400 deaths over a two-day period, authorities were forced to issue even more stringent restrictions on people and businesses.

While Europe has now taken over from China as the epicenter of the outbreak, many Western countries do not appear to have learned from Italy's example.

In London, where people flocked to parks to bask in a sunny weekend despite government advice to stay home, UK Prime Minister Boris Johnson ramped up his country's response and essentially sent it into lockdown on Monday evening.

"People will only be allowed to leave their home for the following very limited purposes," he added, listing four reasons for which citizens can go outside; shopping for basic necessities, doing one form of exercise a day, providing medical services, or going to work if it is absolutely vital.

He added police would enforce the rules by breaking up public gatherings and issuing fines.

But Nick Chater, professor of Behavioral Science at Warwick Business School, told CNN that this did not go far enough, saying western leaders had been "very mixed in their messaging" as they gradually closed bars, restaurants, theaters and schools over the past week -- and urged the public to listen to the advice to help prevent the spread of Covid-19.

"When people are being advised quite gently to do something, I don't think one should view them as being necessarily outrageously unreasonable in going ahead and doing it anyway," he said.

"Because the message they're implicitly getting is it isn't all that important, because if it was really important, we tell you. So we don't say things like, 'we advise you to stop at red lights, we advise you to drive on this side of the road' ... We just say you just have to. If you don't, you're breaking the law." 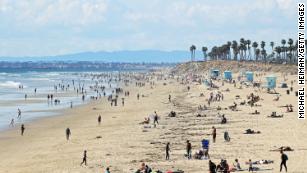 Is going to the beach OK? What about hiking?

Western governments have been reluctant to take the draconian lockdown measures that were quickly enforced in China after the coronavirus outbreak began. Instead, people in places like the UK, Germany and Australia have been advised by national governments to practice social distancing, and businesses told to ensure staff work at home where possible.

Germany has implemented a "contact ban" rather than a full nationwide lockdown with Chancellor Angela Merkel saying in a news conference Sunday that the country would ban all gatherings of more than two people, excluding those living together, to "reduce contact" and curb the spread of the virus.

At the weekend, crowds descended on California beaches, hiking trails and parks in defiance of a state order to avoid close contact with others. Australia's famous Bondi Beach was packed with thousands of people, until the state government closed it to the public on Saturday.

Monday began with horrified Londoners posting images of workers squeezing onto Tube trains -- which are now supposed to be only for essential workers.

Neil Coyle, an MP for Bermondsey in London, tweeted an image of a busy train and said he had asked the government to "consider prosecuting irresponsible employers taking risks with other people's lives and our NHS."

Outraged people on social media have been sharing images of busy streets and tourist spots, and branding those ignoring the rules as "Covidiots." Vacationers have been flooding to remote communities, raising fears that small hospitals could very quickly reach capacity.

Snowdonia National Park in Wales said it had experienced its "busiest visitor day in living memory" and called on the government to institute clearer measures and guidance. The mother of tennis player Andy Murray shared a photo of a trailer reading, "Go home." 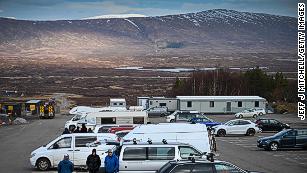 But Chater says these comments aren't enough. "There's a huge communication failure," he said. "We've been looking at China, we can also look at Korea, we can see that there are strategies that actually do work, so it's not purely theoretical.

"In China, the main thing has been just a very heavy lockdown, probably a heavier lockdown than it strictly needed," he said. "But we know that a really severe lockdown will work. And in Korea, people have had much more freedom to move about, but they've had extremely vigorous testing on a massive scale. Probably a combination of those strategies is required."

China on Thursday reported no new cases after enacting strict and early restrictions, although these have left some residents unable to leave their apartments for more than a month and put the economy in steep decline.

Social distancing has been the most effective measure at keeping infection rates low in Hong Kong, though cases there are now rising again. New arrivals will be issued with an electronic wristband that monitors whether they violate quarantine.

Hemingway's, a bar in Hong Kong's Discovery Bay area, which has a large foreign population, last week issued a "warning to anyone returning from Europe" that CCTV footage of anyone violating the rules would be sent to the authorities.

Some European countries are now taking more action to slow the spread of the virus. In France, thousands of fines have been issued for those breaking the rules against all but essential trips outside, and more parks and beaches are starting to close.

But if leaders want people to do more, they must make it "mandatory," says Chater -- before it's too late.