This was supposed to be the year that Beijing would announce it had ended absolute poverty in China, fulfilling a key pledge of President Xi Jinping and one of the founding missions of the Chinese Communist Party.

Then the novel coronavirus pandemic tore through the global economy.

China shut down factories in January and February to prevent a larger outbreak and contain the virus, but at the same time it severely damaged employment and production domestically.

Consequently, China's economy shrank by 6.8% in the first quarter of 2020 compared to a year earlier. For the first time in decades, Beijing didn't set a GDP target at its annual meeting of its rubber-stamp parliament, the National People's Congress (NPC), in May.

Since then, China has been trying to dig itself out of its economic slump, and there are some signs of recovery — though the path forward is still looking slow and painful.

Facing reporters at his tightly controlled annual press conference at the end of the NPC, Chinese Premier Li Keqiang admitted that some Chinese citizens had been impoverished by the pandemic.

"Before Covid-19 struck, there were some five million people living below the poverty line. But because of the disease, some may have fallen back into poverty," Li said. "Hence, we now face a greater task in meeting our goal."

Experts say Xi's chances of hitting his grand goal largely hinge on whether or not Beijing can get the country back to work quickly.

"As long as employment continues to recover or mostly recovers by the end of the year, they're going to come really close to hitting their poverty targets," said Scott Rozelle, co-director of Stanford University's Rural Education Action Program.

"[But] there's just a lot of things that say this is going to be a persistent problem."

For much of the 20th century, China was one of the most impoverished countries in the world.

Beijing defines absolute poverty as as surviving on less than $324 a year (2,300 yuan), lower than half the World Bank's more commonly used poverty line of just under $700 a year.

As recently as 1990, almost 658 million people were living below the poverty line, by Chinese government standards.

Since then, that number has rapidly decreased. In 2012 the Chinese government announced there were 115 million people living in absolute poverty. With less than 10 million left in poverty at the end of last year, it appeared that China was on pace to accomplish its goal.

Shenjing He, a professor at the University of Hong Kong studying urban poverty, said that although there were only a comparatively small number of people left in absolute poverty, they were among some of the worst affected. 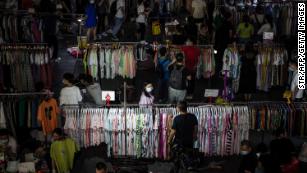 "They are those people who are really suffering for the problem of poverty," she said. "They live in very poor conditions and are usually situated in mountainous areas and very remote places."

The Chinese government has committed to spending $20.6 billion (146 billion yuan) on poverty alleviation in 2020 -— a figure which doesn't include additional funds from local governments and private businesses, such as Alibaba (BABA) and Tencent (TCEHY), which are strongly encouraged to contribute.

This government money is distributed at a local level and how each individual province, city and town end poverty is mostly left up to the officials — a tactic which Xi said was designed to tailor policies to specific areas.

More than 750,000 Communist Party officials have been sent to villages across the country to assess local poverty, with many conducting door-to-door interviews, according to experts and state media.

The solutions local officials have taken to the poverty crisis have varied. In some places, villagers have been given small loans to help start businesses or been given visibility on e-commerce sites such as Taobao to better sell their produce.

Other poverty alleviation measures have been controversial, such as the plan to move millions of poor residents from their rural communities to more urban environments. Some residents refused to move or found themselves stranded in new cities with no job or marketable skills.

He, the Hong Kong professor, said the Chinese government has commissioned domestic scientific bodies to closely monitor its progress on poverty alleviation in 2020, to ensure the goal was met in a "very important year."

But according to my colleagues in China, they don't think there is a big problem for the government to fulfill this commitment," she said.

Independent experts say getting an accurate picture of rural poverty on the ground is difficult, partly due to the sheer size of China and partly due to the secrecy of its government, especially under Xi's increasingly authoritarian and opaque administration.

But there are already indications that China's poor may have been hit hard by the coronavirus economic downturn.

Unemployment in China has jumped in the wake of the virus, officially rising as high as 6.2% of the population in February. The Chinese government doesn't release a total number of unemployed officially, but according to CNN's calculations it would have been about 29 million.

That official number, though, doesn't include people in rural communities or a large number of the 290 million migrant workers who work in construction, manufacturing and other low paying but vital activities. 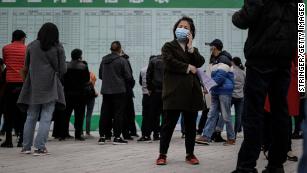 80 million Chinese may already be out of work. 9 million more will soon be competing for jobs, too

If those migrants are included, as many as 80 million people could have been out of work at the end of March, according to an article co-authored in April by Zhang Bin, an economist at the Chinese Academy of Social Sciences, a think tank run by the government.

A survey of rural Chinese families by Stanford University's Rural Education Action Program (REAP) in the first four months of the year, when the country was worst affected by the virus, found 92% of respondents in villages had seen their income levels reduced by pandemic protection measures.

"The employment of rural workers was essentially zero for a full month after the start of the quarantine," the report said.

To deal with that income hit, "half of them have cut back on their nutrition and food diversity -— they've gone to grain and a vegetable diet instead of meat and fruit," said REAP's Rozelle, who authored the study. "They've also cut back somewhat on expenditures on their kids' education and expenditures on non-Covid health issues."

REAP isn't the only survey to find large reductions in rural salaries during the coronavirus. Research by the Chinese Academy of Agricultural Sciences' (CAAS), quoted in state media China Daily, found that 80% of agriculture workers who were interviewed said their incomes could fall by more than 20%.

Some CAAS estimates found that farmers' salaries could drop by up to 40%.

To make matters worse for some rural communities, parts of China have seen their worst flooding in decades in June, just as they were beginning to get back on their feet from the coronavirus.

According to state media, tens of thousands of homes have been destroyed along the Yangtze River and at least 12 million people affected, costing the economy about $3.6 billion.

John Donaldson, poverty expert and associate professor at Singapore Management University, said in many ways the coronavirus had been a "perfect storm" for people living in poverty in China, affecting many different sectors at the same time.

"Factories are still not up and running at full strength, partly because of fear of the coronavirus, you have construction [being put on hold], even hotels which buy a lot of food from the countryside are low on business," he said.

In addition, Donaldson said that local officials whose responsibility it had been to police poverty alleviation measures had been distracted with their fight against the coronavirus.

Despite the setbacks, the ruling Communist Party and state-run media have been running a concerted campaign to reassure their domestic audience that they will meet their target.

In early June, Xi toured the northern province of Ningxia visiting families and observing a workshop, built with poverty alleviation funds, where villagers were producing cartons.

"(Xi) has stressed efforts to secure a decisive victory in building a moderately prosperous society in all respects and eradicating poverty," state-run news agency Xinhua said in its write up of the tour.

Experts generally agree that it is highly unlikely that the Chinese government will announce it has missed its targets on poverty alleviation at the end of 2020. Donaldson said that the targets will likely either be met or they'll be fudged enough to say they've been met.

But there is concern that even if Beijing does meet its goal to eliminate absolute poverty by the end of the year, there is still a long way to go to improve the lives of hundreds of millions of its citizens.

For years, Xi has been claimed China is becoming a "moderately prosperous society."

However, speaking at his press conference in May, Li said that there were still 600 million people — about 40% of the population — who were living on a monthly income of just around $140 (1,000 yuan).

"It's not even enough to rent a room in a medium Chinese city," Li said.

Donaldson said that his biggest concern is that once the Chinese government announces it has eradicated absolute poverty, local authorities could cease to regard all poverty as an important issue, despite the millions of people who are still in need of urgent assistance.

"I mean that's the bottom line: If poverty is eliminated, how many people are poor after this campaign? Nobody will know," he said.