"Women can tell as many lies as they want," Sugita was reported to have said at a ruling party parliamentary meeting on 2021 budgets to promote gender equality. Sugita apologized for her remarks earlier this month, saying she hadn't meant them for female sexual assault survivors or to imply that only women lie. 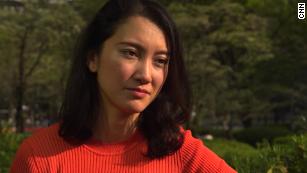 This wasn't the first time the lawmaker and member of the ruling LDP party's Women Activity Promotion Taskforce has alienated parts of the electorate with her conservative views.

Sugita has previously denied the existence of "comfort women" -- a wartime euphemism for women and girls, some who volunteered and others who provided sexual services for Japanese soldiers before and during World War II.

In 2018, she came under fire for saying that the government should not support same-sex couples because they cannot bear offspring and therefore were not "productive," in an article published in conservative magazine Shincho 45.

She has also victim-blamed Shiori Ito, a journalist and icon of Japan's #MeToo movement, by stating her alleged rape was due to "clear errors on her part as a woman," according to local media reports.

Experts say Sugita's recent apology missed the mark, and her comments are damaging -- especially in a country with so few female politicians.

Tomomi Inada, a former defense minister who served in former Prime Minister Shinzo Abe's government before she resigned in 2017, said being part of a minority comes with its stereotypes.

"We are often judged to be emotional and are treated with skepticism when we voice our opinion strongly. That's because we are such extreme minority in Japanese politics," says Inada.

To survive, some women in Japanese politics feel the pressure to comply with their male counterparts' views to fit in, according to Chizuko Ueno, a sociologist and the chief director of the Women's Action Network. "They can become more hawkish than their male colleagues," she adds.

Inada acknowledges feeling pressure to conform to the male majority's viewpoint while in government, but says it is important for women not to give in to this. 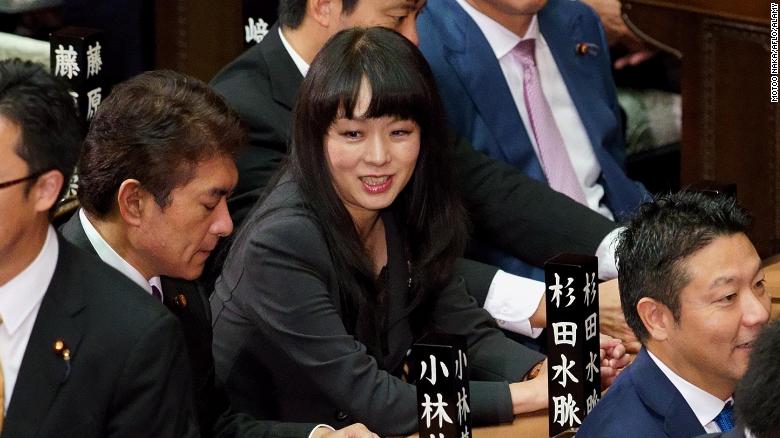 Japan's member of the House of Representatives Mio Sugita attends at the opening of the extraordinary Diet session in Tokyo, Japan on October 24, 2018.

"Countless feminists paved the way for Sugita, but she is using her position of power to dismantle the privilege they built for her. It's like she turned against that very fight," says Choo.

That view was echoed by the Flower Demo, a human rights group organizing a movement against sex crimes. It issued a statement in response to Sugita's remarks, saying "parliamentarians who ought to address gender inequality must not be allowed to set the wrong example by issuing sexually discriminatory remarks and revealing their ignorance of the very real problem of sexual violence."

In the past, women in Japan who defied expectations and pushed the needle on gender equality have faced backlash.

For instance, in 2017, Yuka Ogata, a local Japanese politician, was confronted by lawmakers for trying to bring her baby to a council session. One councilman shouted at her while others told her that she couldn't stay and had to leave the room immediately. Ogata had wanted to show how difficult it is for women to find a work-life balance. 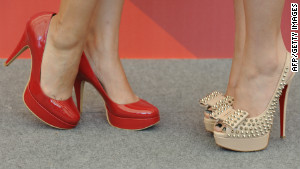 I don't wear high heels for anyone but me. Got that, boss?

However, in recent years, campaigns such as #MeToo and #KuToo -- which saw women petition against wearing high heels to work -- have put Japan's gender inequality and human rights issues in the spotlight.

"All generations in Japan have access to the internet, and younger people, in particular, have mobilized on social media to express their opinions and force politicians to change their stance on topics," says Choo.

Increasingly, people in Japan are no longer willing to turn a blind eye to discriminatory remarks made by politicians, adds Ueno, the sociologist.

"Society is changing and the media's high attention on Sugita's remark is proof of such change. Not long ago, remarks like hers were so commonplace they were overlooked but now it's getting a headline," says Ueno.

Inada says people in Japan think a strong woman will climb the political ladder alone, but that's a myth. "We will never be able to change the system if we stick to the idea," she says.

Today, for instance, 127 countries use electoral gender quotas to increase women's representation in politics, according to the International Institute for Democracy and Electoral Assistance (IDEA).

"(Japan is) probably 20 to 30 years behind many other countries, but now is the time for female politicians to take action," says Inada.

Some steps have been made towards change. In 2018, a law was passed to encourage political parties to set targets for gender parity.

However, as with an 1985 equal employment law which aimed to promote gender equality in private companies, there are no legal requirements or penalties for parties that fail to comply, according to Hiroko Goto, a gender equality expert at Chiba University.

As a result, Japan's ruling LDP has a poor record of appointing women. In 2018, former Prime Minister Shinzo Abe appointed just one woman, Satsuki Katayama, to his new cabinet -- claiming she could do the work of "two or three" women."

The situation didn't get much better in 2020.

When Yoshihide Suga took over office in September, he appointed only two women to his 21-strong team, to the chagrin of many, including the former defense minister Inada. She declared shortly afterward that Japan was a "democracy without women."

Inada sought to join Japan's LDP leadership race after Abe resigned in August due to poor health. However, neither she nor Seiko Noda, a former internal affairs minister, secured the 20 nominations needed from other LDP lawmakers to run as a candidate.

Tokyo Governor Yuriko Koike was the LDP's first and only female candidate -- and that was in the 2008 presidential election.

Despite the barriers, more women are applying for political office than ever before.

Last year, of 370 candidates seeking one of the 124 seats being contested in the Upper House of Councilors, 104 -- or almost 30% -- were women, according to public broadcaster NHK.

Of those, 28 women were elected -- matching a previous high from 2016, according to NHK.

Ueno, the sociologist, says while these women can serve as role models in Japan, many of them are members of smaller, left-wing parties such as the Constitutional Democratic Party (CDP), which have a less influential presence in the Japanese parliament. Also, Japan's upper house is the less powerful of the parliament's two houses -- for instance, laws are generally passed by the lower house before being sent to the upper house for approval. The lower house can overrule the decisions of the upper house with a majority vote on significant national issues, such as the selection of the prime minister and budgets.

For members of the Flower Demo, who say Sugita's remarks amounted to a "second rape" for sexual assault survivors, the fight continues. On October 13, the group brought a petition with over 136,000 signatures, demanding Sugita's resignation, to the LDP's headquarters in Tokyo. The LDP refused to accept it, according to Minori Kitahara, a Flower Demo member who launched the petition.

The LDP Secretary General's office said they did not accept the petition of the Flower Demo as it is not usual practice for them to do so.

"(Sugita) has always made remarks like that and the ruling LDP party has forgiven her. But as the Japanese #MeToo is gaining momentum, the LDP can't ignore this," says Kitahara.

"Japan is such a male dominated society, we really want the few female politicians to be feminists. We also need (male politicians) to be better allies to women, and understand that the gender issue is important."