Boris Johnson's government is 'gaslighting' Britain about the realities of Brexit, critics say Andy Trust has been exporting fish from Cornwall to continental Europe for 20 years. However, the past seven weeks have given him cause to contemplate shutting down the entire European operation of his fish merchants, Ocean Harvest. "The cost of sending fish into Europe has more than trebled. In an industry that operates on thin profit margins, it could destroy British fishing," he says.

It's been seven weeks since the UK completed its departure from the European Union and Boris Johnson's post-Brexit trade deal came into effect.

In that time, British exporters have struggled with new trade barriers. In some cases, orders have been slowed down by paperwork; in others, fresh produce has failed to reach its destination in time, forcing it to be destroyed. All of this is a direct result of the UK's policy decision to leave the EU's single market and customs union.

For companies who built their businesses on unfettered access to that market, these barriers -- put up virtually overnight and with little warning -- have had big consequences. And while it could be argued that these companies had years to prepare for Brexit, the post-Brexit trade deal was only agreed on December 24 and came into force on January 1.

Under these circumstances, you'd expect a government to be doing everything in its power to help struggling businesses. However, critics fear that the Johnson administration has buried its head in the sand: The Prime Minister has called the difficulties no more than "teething problems."

"Only some of the issues we are seeing at present could be legitimately described as 'teething problems,'" says Adam Marshall, director of the British Chambers of Commerce. "Yes, some firms are facing adjustment ... But others are seeing their entire business model up-ended, and their ability to trade successfully undermined." 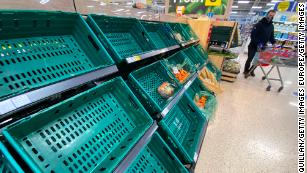 Last weekend, Britain's foreign secretary, Dominic Raab, said that he understood some companies were struggling as a result of the sudden change, but that "if you take a 10-year view ... the growth opportunities in the future are going to come from emerging and developing economies around the world."

Which isn't much comfort for businesses that export fresh produce, such as Scotland's fishing industry. "For many businesses, trading with the EU now feels like a high-risk, long-odds gamble," says James Withers, chief executive of Scotland Food and Drink, a lobby group. "The trading system is more costly, complex, slower and unreliable. For our European customers who need guarantees of products like salmon arriving at a certain time, reliability is everything."

Far from being teething problems, the slower, less reliable trading systems Withers describes are the consequence of new paperwork on things like customs, proof of a product's origin, and sanitary standards. In the case of companies that import parts from Europe before exporting a finished product, the correct paperwork is needed at every stage of the supply chain, leaving British exporters at the mercy of European firms which are also getting their heads around the complex new processes. 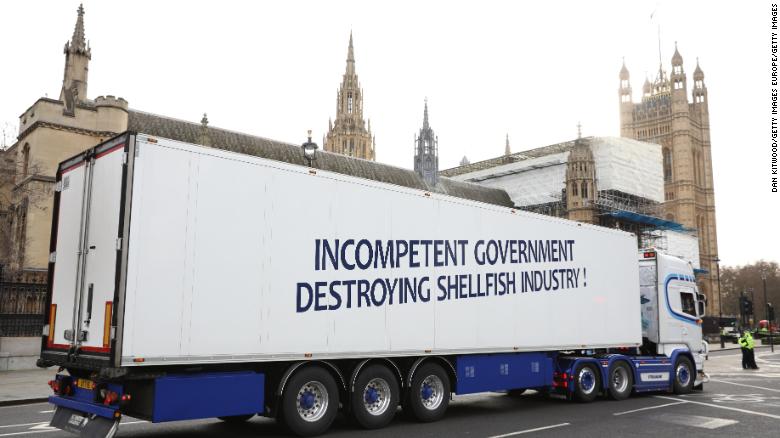 Members of the seafood industry have protested against the post-Brexit requirements that they say have caused a sharp drop in exports to the European Union.

"Even though impact of FTAs is usually analyzed over a period of time, for a government minister to say we should look at the impact of this deal in 10 years when people are losing jobs and money is a bit tone deaf, especially when you consider that it was down to the government to provide guidance to allow businesses to prepare," says Anna Jerzewska, founder of Trade and Borders, a consultancy which assists exporters and importers across Europe.

If the current situation sounds dire, some believe it will get worse. Withers points out that controls on EU food imports are due to start in April and that stockpiles are being depleted. And when Europe's hospitality businesses emerge from lockdown, demand for food and drink will pick up. "If we can't supply them, our competitors will."

Unfortunately for exporters, neither the UK government nor the EU seem in the mood to reopen the deal, after years of painful Brexit negotiations. "Politically, the government made a decision to prioritize regulatory autonomy over economic integration with the EU and the trade deal reflects that -- it does little to facilitate trade," says Sam Lowe, a senior research fellow at the Centre for European Reform.

For the time being, these changes have mostly affected those looking to export goods. However, there is also major concern at the long-term impact that Johnson's hard Brexit will have on the UK's services industry.

"When we emerge from lockdown and British actors, musicians and people providing professional services start looking at taking jobs in Europe, they will be introduced to a world of visas, work permits and European embassies that they never had to worry about before," says Lowe.

One of the biggest fears of a hard Brexit was the impact it would have on the city of London, the world-class financial hub that has been the envy of Europe for decades. While London has not seen the flight of jobs many predicted, billions of euros in share trades have switched to Amsterdam from London since January 1. This doesn't have much of an immediate impact as the work can still be done by staff in London, but if this trend continues, it could undermine Britain's status as the financial capital of Europe and impact future inward investment.

It had been known for a long time that financial services were not going to be covered in the trade deal. In some respects, that made life easier for financial firms. "Because it's such a heavily regulated sector, there hasn't been too much disruption or job losses," says Lowe. However, he believes that the impact could come later down the line. "If you're looking to easily sell new financial services across Europe in the future, where do you headquarter yourself: Amsterdam or London? The answer isn't as clear cut as it once was." 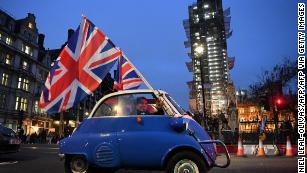 2020 stretched the social fabric of the United Kingdom. 2021 could rip it to pieces

Many analysts thought that the initial trade deal would smooth the path to some kind of future pact on financial services, but with the UK government being bullish about the merits of its agreement and Brussels making noises about taking London's business, things don't look promising.

"There might be closer cooperation, but I doubt it at the moment. What's more concerning is the government's gaslighting. They don't admit that there's a problem; they play it down; they say to wait 10 years. Which one is it? Is it all fine or do we need to wait 10 years? And what are the people currently suffering supposed to do in that time?" says Anand Menon, professor of European politics at King's College London.

Liz Truss, the international trade secretary, has refused to answer questions from lawmakers on their concerns about the deal, while the government says it has no plans to publish an impact assessment.

Others are pessimistic about the long term, and unsure if the government is unaware or in denial about how bad things could get. "It's entirely possible that 10 years from now, the UK will have pivoted to exporting beyond Europe," says Simon Usherwood, professor of politics at the University of Surrey. "My concern is that it will be as part of an overall reduction in trade, meaning a smaller economy and, ultimately, job losses."

Alastair Campbell, who was former Prime Minister Tony Blair's director of communication, is less charitable. "It makes my blood boil. I think they are in denial because they cannot handle the consequences of their policies. They are battering some of our greatest industries and trying to distract everyone by picking fake fights and starting culture wars." 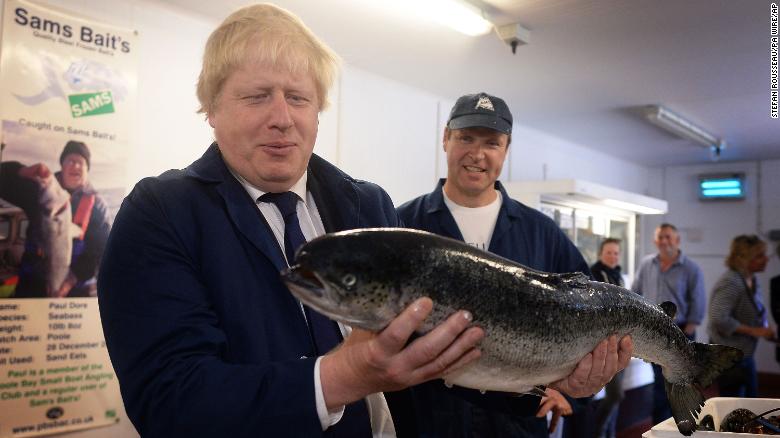 Boris Johnson's visit to a fish processing plant in the English county of Suffolk was a key event in his campaign for Brexit.

This is all going to get very uncomfortable. Multiple lawmakers, including those from Johnson's own party, told CNN that they are still receiving many emails from constituents who are facing troubles. However, where initially they sought advice, many are now just expressing their frustrations.

"They know we can't do anything in a lot of instances. The government's websites are not very helpful and they simply are not getting the help they need," says one lawmaker on the government payroll. "It's difficult. They are angry that people are canceling orders and that I personally cannot get a French visa for them," they add.

A government spokesperson told CNN that it was "committed to ensuring that businesses get the support they need to trade effectively with Europe and seize new opportunities as we strike trade deals with the world's fastest growing markets."

Authorities were operating export helplines, running webinars and offering support from advisers, the spokesperson said, adding that a £20 million ($28m) fund to help small businesses adjust had also been established.

But back in Cornwall, Andy Trust doesn't see much hope for the future. "The British public will never eat enough fish to make up for lost European business. For every man at sea, another 20 jobs rely on them on shore. Boris Johnson spouts on about investing millions in fishing over the next five years. In five years, he might have destroyed the whole industry."

Of course, the UK is the world's fifth largest economy with many talented people working in the logistics industry. It is entirely possible that the situation could improve. However, for that to happen, Boris Johnson and his cabinet will need to convince their critics that they are operating in the realms of reality.