Cologne's mayor has come under fire for advising women to stay "an arm's length" from male strangers afteralleged sexual assaults and muggings during New Year's Eve festivities in the German city.

Germany has been shocked by the apparently coordinated crime wave, in which Cologne police received more than 100 criminal complaints from women who said they had been sexually assaulted or robbed by gangs of men of Arab or North African appearance in the city center during New Year's Eve festivities. Cologne police would not elaborate Wednesday on the total number of crimes reported, as the figure continued to rise.

Police have said that about a quarter of the complaints related to sexual assaults, including a rape, and that they believed the assaults were probably intended to distract the victims, allowing attackers to steal mobile phones and other devices.

Three suspects had been identified and were being questioned, a police representative told CNN. Police were working through a large amount of cellphone footage from the evening to identify further suspects.

Similar attacks were reported in Hamburg on New Year's Eve, with 39 reported sexual assaults and 14 robberies, according to police in the city, while police in Stuttgart said two women had reported their phones were missing after they were assaulted by a group of men of Arab appearance during New Year's festivities there.

The crimes, which an outraged German Chancellor Angela Merkel labeled "disgusting" and Cologne's police chief described as offenses "of a totally new dimension," have sparked a firestorm in Germany. 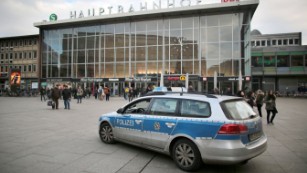 A police car passes the central railway station in Cologne, Germany near where a series of sex assaults allegedly occurred on New Year's Eve.

The episode has prompted angry protests, fueled public debate about Germany's welcoming stance to migrants and unleashed a wave of anger at authorities and the media for their perceived reticence in addressing the crimes, out of a misplaced sense of political correctness.

Cologne Mayor Henriette Reker appeared to pour oil on the fire with her remarks at a news conference Tuesday, at which she addressed the New Year's crimes and discussed plans to issue guidelines for behavior during Cologne's famous Carnival next month, when hundreds of thousands of revelers are expected on the city's streets.

When asked how women could protect themselves, she suggested keeping "a certain distance of more than an arm's length" from unknown men.

She reiterated her advice at an appearance on German public service broadcaster ZDF's "Heute Journal" program Tuesday, when she said: "Women would also be smart not to go and embrace everyone that you meet and who seems to be nice. Such offers could be misunderstood, and that is something every woman and every girl should protect herself from."

Her comments were met with derision on social media, with the hashtag #einearmlaenge ("an arm's length") circulating to mock her suggestion for appearing to place responsibility for the attacks on the victims. 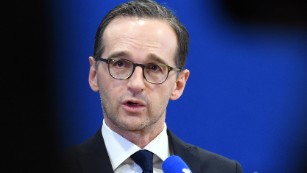 German Justice Minister Heiko Maas was also critical of the comments, tweeting: "I don't think much of the how-to-behave tips for women such as #anarm'slength. It is not women who are responsible, but the perpetrators."

Reker later issued a statement in response to the criticism, saying that media coverage had given the impression that her prevention initiatives were limited to behavior tips for women, which was not the case.

She had also explained at the news conference Tuesday the need "to explain to people from other cultures that the jolly and frisky attitude during our Carnival is not a sign of sexual openness."

Broadcaster: 'It was our failure'

German broadcaster ZDF also issued an apology Tuesday for failing to report on the attacks in a timely fashion on its "Heute Journal" show, after criticism that the media had neglected to adequately cover the incidents because of sensitivities concerning the alleged ethnic identities of the assailants.

In a statement, deputy editor Elmar Thevessen said the network had failed by not reporting on the attacks during the Monday evening broadcast.

"It was our failure that the news broadcast at 7 p.m. did not inform about the attacks on New Year's Eve," read the statement.

"The editorial department of 'Heute' decided to delay the report until today because of an emergency meeting to gain time for additional interviews. This, however, was a clear misjudgment."

'They touched us everywhere' 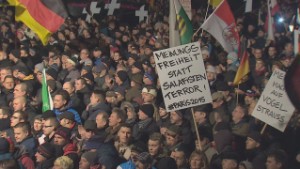 Inside march against Islam in Germany

Victims of the assaults in Cologne said this week that they feared being killed or raped by the attackers. One woman said she was too scared to go out alone after the ordeal.

"The men surrounded us and started to grab our behinds and touch our crotches," she said.

"They touched us everywhere. I wanted to take my friend and leave. I turned around, and in that moment, someone grabbed my bag."

Germany has taken the largest numbers of migrants from the influx that has created a crisis on Europe's borders, but many Germans have expressed opposition to the sudden arrival of so many, predominantly Muslim, migrants, questioning their ability to adapt to a European way of life.