Two of the suicide bombers involved in the Easter Sunday attacks in Sri Lanka were members of a prominent and wealthy family in Colombo, sources have told CNN, in a development that has rocked the small Muslim community in the city.

The brothers, Imsath Ahmed Ibrahim and Ilham Ahmed Ibrahim, were among the band of extremists who blew themselves up in Sunday's attacks, two sources with knowledge of the investigation said. Their father, Mohamed Ibrahim, is the founder of Colombo-based Ishana Exports, which describes itself on its website as the "largest exporter of spices from Sri Lanka since 2006."

Mohamed Ibrahim was among dozens of people detained in the wake of the attacks, which killed 359 people and injured more than 500, the sources told CNN. Video footage shows Ibrahim being led away by police. Authorities have not announced any charges against him.

The brothers are reported to be in their early 30s. Their identities were first disclosed by Indian news outlet Firstpost, citing intelligence sources in India. CNN has not been able to reach Mohamed Ibrahim or other members of his family for comment.

Sri Lanka's State Defense Minister Ruwan Wijewardene told reporters at a press conference earlier on Wednesday that those responsible for the attacks on Easter Sunday were well educated, from upper-middle class families, and financially independent. That was a "worrying factor," he said. 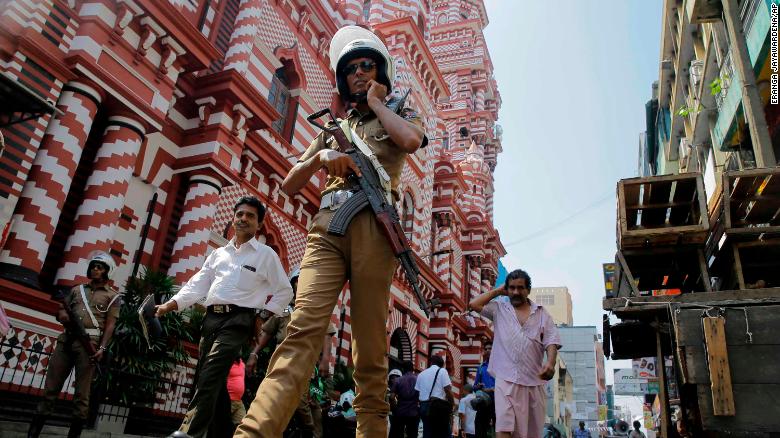 A Sri Lankan police officer patrols out side a mosque in Colombo, Sri Lanka.

According to neighbors and members of Colombo's Muslim community, the Ibrahims are one of the wealthiest Muslim families in the capital, with connections to the country's business and political elite. 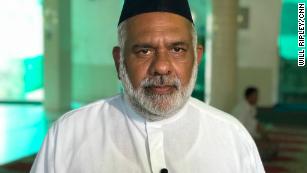 Reyyaz Salley, chairman of Colombo's Dewatagaha Mosque, one of the largest and oldest in the city, said the elder Ibrahim was "a really nice person, a business-minded person who did export of spices."

"We knew him as a normal person and as a businessperson," he said.

The family spice company appears to be linked to a copper factory that was investigated in association with Sunday's attacks. On its website, Colossus Copper states that Ishana Spice is its parent company. A phone number provided by both companies on their websites was identical. Calls to that number were not answered Wednesday.

Nine workers at the copper factory appeared in court earlier this week after being arrested on suspicion of providing materials used in Sunday's bombs, according to court papers seen by a source at Colombo Magistrates' Court. They are due back in court on May 6.

Hilmy Ahamed, vice president of the Muslim Council of Sri Lanka, was aware of Mohamed Ibrahim as a prominent member of the community. He described him as "very rich" and added that his sons were "well educated overseas."

Ahamed doubted Mohamed Ibrahim had any idea of what his sons were planning. "He was a busy businessman," he said. "He probably totally neglected what was happening around him. I doubt that he had knowledge."

British security sources in the UK identified another bomber as Abdul Lathief Jameel Mohamed, saying that he studied in the southeast of England from 2006 to 2007. Wijewardene, the state defense minister, said investigators believe one of the bombers had studied in the UK and was a postgraduate student in Australia before returning to Sri Lanka.

Shiral Lakthilaka, an adviser to Sri Lanka's President, identified one of the men who blew himself up at the Shangri-La hotel as Inshan Seelavan, and described him as the "mastermind" of the attacks. Other officials have named a radical extremist, Zahran Hashim, as another key figure in the attacks. His whereabouts are unknown. 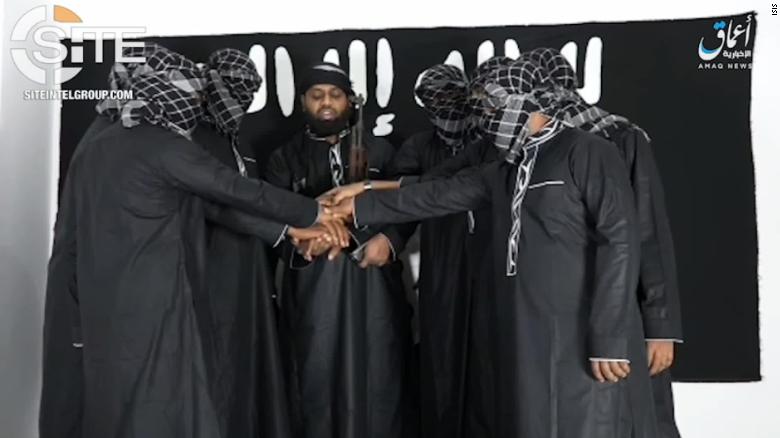 Zahran Hashim is seen, unmasked, in the center of a still from a video released by ISIS after the attacks.

Both Ahamed and Salley said they had repeatedly attempted to warn authorities about Hashim, pictured in a photograph released by a news agency affiliated with ISIS Tuesday. Hashim, a radical Islamist preacher, was known to the local community for ranting against moderate Muslims and Buddhists.

"We reported him to national intelligence about three years ago," Ahamed said, adding he had taken DVDs of Hashim's preachings to show officials. "At the end of 2018, in December, when we had this crisis where some youth damaged Buddhist statues, we went back again to intelligence and gave them all the info we had on him and told them they should try to catch him."

In one of Hashim's videos, uploaded to YouTube and reviewed by CNN, the preacher said that non-Muslims who refused to convert to Islam should be killed. "If he is a Kafir, he is to be killed according to the Sharia Law," he said on the video, an interpretation of Islam that Ahamed described as "extremist" and incorrect. 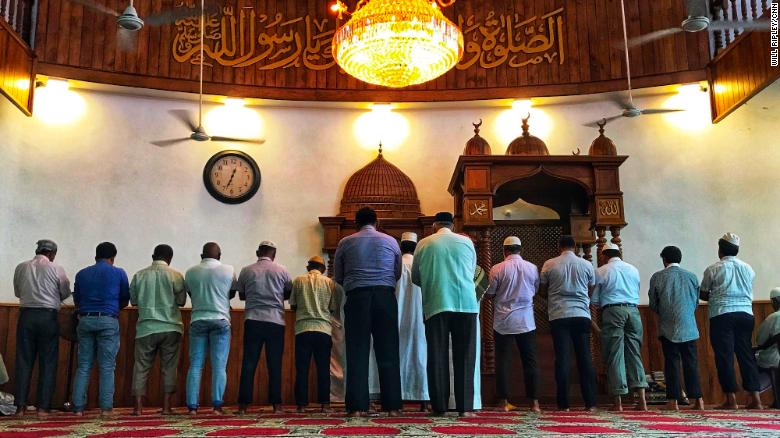 Worshipers pray at the Dewatagaha Mosque in Colombo, Sri Lanka, on April 24, 2019.

Ahamed said that authorities failed to act on the warnings, but added that had not taken Hashim too seriously either, a move he now regrets.

"We are totally embarrassed as a community. We have failed as a community to monitor what was happening in our backyard," he said. "Most of these young people are radicalized online. That is what worries me, as a parent of two young boys. We are always worried that they might be radicalized through the internet."

Ahamed was not the only Muslim leader attempting to raise the alarm about creeping radicalization within the community. Salley, the Dewatagaha Mosque chairman, said that he had repeatedly warned about Hashim's activities.

When CNN visited the mosque on Wednesday, two large banners erected outside read that "terrorism and extremism has no place in Islam" and "we stand with Christian brethren in grief, you are with us." 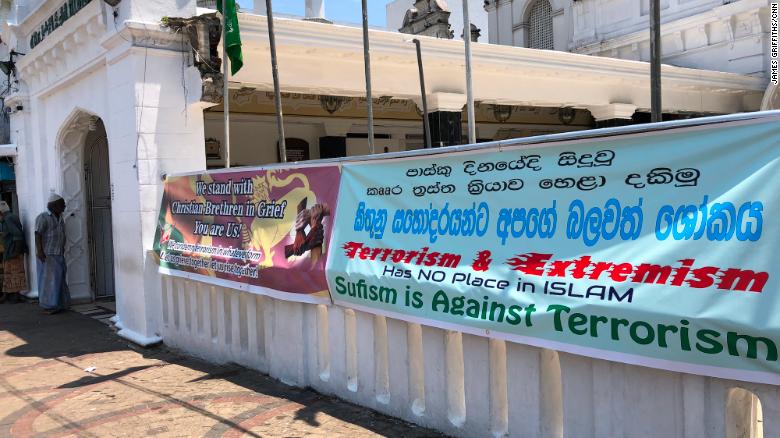 Signs outside Colombo's Dewatagaha Mosque, one of the largest and oldest in the Sri Lankan capital.

"On February 11, I sent videos to (Sri Lankan) intelligence quoting this guy, the videos he made promoting jihad," Salley said. "We never expected this guy was going to do something (so extreme) but he was brainwashing the people, to a certain extent."

"There and been videos of him coming out against other religions and groups," he added. "Video clips were given to police and no action was taken."

Police and intelligence spokesmen did not respond to requests for comment about the alleged warnings about Hashim. The government has previously acknowledged and apologized for failing to act on warnings received from Indian intelligence that Hashim and his followers were planning a terrorist attack.

"He was talking about jihad," Salley said. "These are all very dangerous messages for the country. First and foremost I never ever expected something disastrous, I never thought in my life ... If the authorities had take our advice this could have been prevented."