An Iranian oil supertanker that was seized by the UK, a move that came amid escalating tension between Tehran and the West, was released Sunday and was moving away from Gibraltar, according to local media and maritime tracking site.

The Adrian Darya, formerly known as the Grace 1, set sail under an Iranian flag for an unknown destination.

"Around the clock efforts have been underway to perform the logistical procedures at the port and to secure a complete crew. Contacts with the coordinating company are happening moment by moment. With the arrival of two engineering teams from two separate locations, the tanker is expected to depart Gibraltar tonight," Iran's ambassador to the UK, Hamid Baeidinejad, said earlier in the day via Twitter. 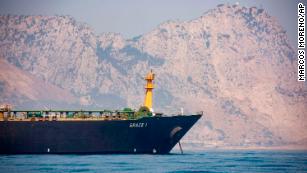 The release of the tanker comes more than a month after British Royal Marines and Gibraltar authorities stormed the tanker because it was believed to have been carrying oil to Syria, which which would be in breach of European Union sanctions. It was seized July 4 in territorial waters of Gibraltar, a British overseas territory on the edge of southern Spain.

Iran denied the ship was headed for Syria. Two weeks after the tanker was taken, Iran seized a British-flagged tanker, the Stena Impero, in the Strait of Hormuz, in what has been widely regarded as an act of retaliation.

Tensions between Iran, the UK and US ratcheted up.

The Supreme Court in the British territory of Gibraltar last week approved the release of the Grace 1, which was seized off the country's coast by authorities last month, after officials said they no longer wished to detain it. 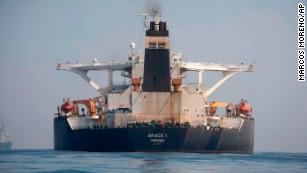 Gibraltar said it had received assurances from Iran and the owners of the oil that, were the tanker to be released, its cargo would not be taken to Syria, which would be in breach of European Union sanctions.

The US also got involved in the standoff when the Justice Department applied to extend the Iranian tanker's seizure and block its release. The State Department said in a statement late Thursday that it had deemed the ship to be "assisting" Iran's Islamic Revolutionary Guard Corps (IRGC), which the US has designated a Foreign Terrorist Organization, in evading sanctions.

But Gibraltar declined to comply, saying it was bound by EU law.