Hong Kong is entering its fourth day of unprecedented subway closures after a weekend of destructive protests in the wake of new emergency legislation left the city reeling.

Anti-government protesters rampaged throughout parts of Kowloon and Hong Kong Island Sunday, targeting subway stations and Chinese-linked businesses, many of which had shut in advance but were nevertheless attacked and vandalized, with police struggling to keep up.

A small number of protesters also targeted a People's Liberation Army (PLA) barracks in the area, causing police to hold up signs warning them to disperse, a concerning escalation against the Chinese military which has largely kept a back seat during four months of anti-government protests.

The unrest took another dark turn when a driver mowed down protesters with a taxi cab was subsequently beaten bloody by a mob, video shows. Thousands had taken to the streets Sunday to participate in two marches against a recent measure banning people from wearing face masks at public gatherings.

The law, enacted by Chief Executive Carrie Lam using colonial-era emergency powers, has stoked a swift backlash among protesters and worries about a crackdown on civil liberties. 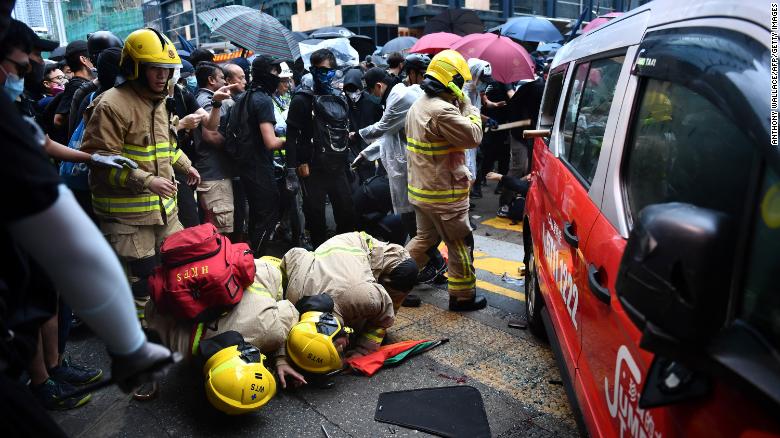 Rescue personnel check underneath a taxi after it hit two protesters along Cheung Sha Wan Road in Hong Kong on Sunday. 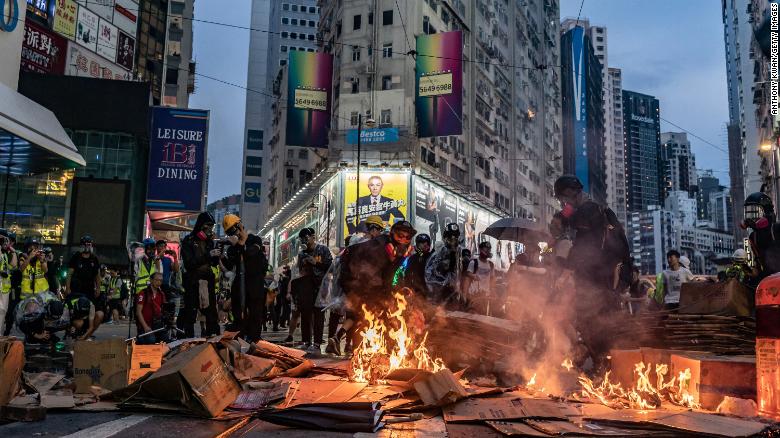 The incident involving the taxi cab was one of the most violent the city has seen during the protest movement, which began peacefully but has seen protesters increasingly use violence and vandalism. The unrest is now entering its 18th week.

Video uploaded to social media shows one of Hong Kong's red taxi cabs, driving slowly in a sea of black-clad protesters, turning left and accelerating into the crowd.

Several other images and video in local media show what appeared to be the aftermath: A man, bloodied and battered, being hit and kicked while on the ground next to the taxi. In one of the videos, a few people could be seen attempting to intervene to help him and stop the mob from further harming him. A police source told CNN the driver was unconscious when he was rescued.

CNN could not immediately confirm the circumstances that led to this incident.

The Hong Kong Hospital Authority said four people were sent to the hospital in the aftermath. One has left and three are in serious condition, including the taxi driver, the hospital authority said.

Hong Kong Police and the city's fire department said they were not commenting on the footage when asked by CNN. 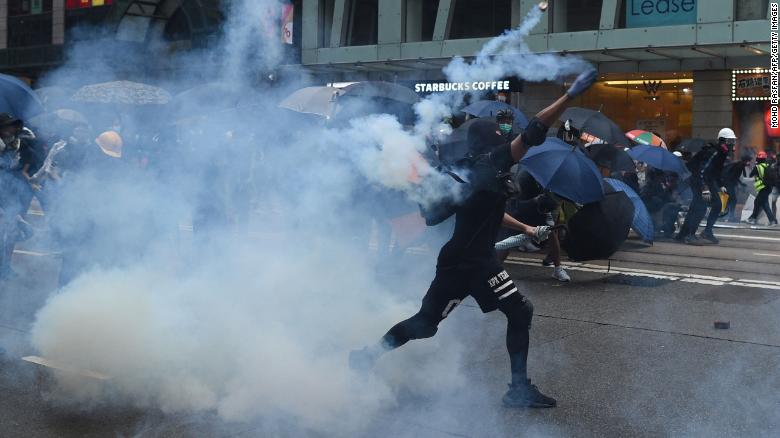 A protester throws back a teargas cannister towards police in the Wanchai district in Hong Kong on Sunday.

Sunday's public assemblies were not authorized by the government, and police used tear gas and pepper spray to disperse those who participated. Several were arrested. Some protesters were seen throwing bricks and Molotov cocktails and setting fires in the street.

Hong Kong has been rocked by violent clashes and the city has been partially paralyzed since the Friday evening decision by the government to use its emergency powers to ban people from wearing masks at demonstrations. Lam said the move was "necessary" but insisted it does not mean Hong Kong is in a state of emergency.

Lam's political opponents said the law was unconstitutional and worried it could portend more emergency measures, which give her effective carte blanche to make new laws as necessary in the instance of a severe breakdown of public order. However, the emergency laws have not been tested in court since Hong Kong's return to China in 1997 and could be found unconstitutional.

On Sunday, a High Court judge rejected an attempt by pro-democracy lawmakers to repeal the emergency law. A hearing for a judicial review of the implementation of the city's emergency measures was scheduled for October 20.

Lam's decision, regardless of its legality, sparked furor among protesters. Since enacting they measure, they have vandalized multiple train stations, set fire to entrances and smashed ticketing facilities. Numerous mainland Chinese-owned banks and stores have also been targeted, as have businesses that expressed sympathy to mainland China. The law does not appear to have deterred people from wearing masks, as many were seen using them during the weekend's demonstrations.