Desperate efforts are underway to locate at least 10 people who are still missing on New Zealand's White Island after a deadly volcanic eruption earlier on Monday.

Speaking at a news conference in the evening, New Zealand National Operation Commander Deputy Commissioner John Tims said that out of 23 people who had been evacuated earlier in the day, five had already died.

The deputy commissioner said that there were still an unknown number of people on White Island, but emergency services couldn't gain access as it was considered too dangerous.

"The island is unstable ... the physical environment is unsafe for us to return," he told reporters.

Tims said that those who had died were from a "range of nationalities" but wouldn't comment further. He said he also couldn't say how many people were still on the island, only that it was in the "double digits."

He said everyone who had been evacuated from the island earlier in the day was injured to some degree, with some suffering severe burns.

Both New Zealanders and tourists have been caught up in the disaster, police said in an earlier statement.

"Based on the information we have it is likely that there are other (fatalities)," the statement said. "Police are leading the search and rescue operation and we are working at pace to confirm the numbers of those involved."

Australian Prime Minister Scott Morrison confirmed on Twitter Monday that Australians were involved in the volcanic eruption. "Australians have been caught up in this terrible event and we are working to determine their wellbeing," he wrote.

More than 30 tourists from the nearby cruise ship Ovation of the Seas were on White Island at the time of the eruption, New Zealand Cruise Association chief executive officer Kevin O'Sullivan told CNN.

"Our hope is that everyone will be recovered quickly and unharmed," he said. The Ovation of The Seas is one of the largest cruise vessels in the world, according to operators Royal Caribbean.

Images of a crater on the island from cameras run by the Institute of Geological and Nuclear Sciences (GNS) appear to show a group of people inside the smoking center just minutes before the eruption.

'If you were close to that, it's not good'

Speaking at a news conference on Monday afternoon, GNS expert Ken Gledhill said that while the volcanic eruption hadn't been that large, it would have been hugely dangerous for anyone nearby.

"(The plume) went up 12,000 (feet) into the sky, and so on the scheme of things for volcanic eruptions, it's not large, but if you were close to that, it's not good," Gledhill said. The scientist added he couldn't predict whether there would be another eruption within 24 hours.

Prime Minister Jacinda Ardern said earlier that it was too early to say how bad the injuries were but added it was her understanding that a number of those affected were tourists.

Tourist Michael Schade and his family had been on the volcano just 20 minutes before it erupted. They were waiting on a boat, about to leave, when the eruption occurred.

"Boat ride home ... was indescribable," Schade wrote on Twitter. "Those are some of the people (our) boat picked up. Praying for them and their recovery. Woman my mom tended to was in critical condition but seemed strong by the end." 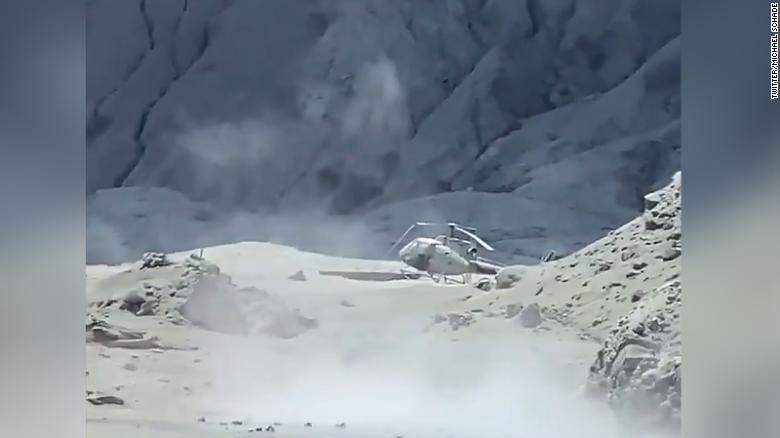 An image of a damaged helicopter on White Island after the eruption on Monday.

"Whakaari/White Island is erupting. More information soon," announced GeoNet in a notice on their official Twitter.

The White Island or Whakaari volcano is New Zealand's most active cone volcano according to the GeoNet website. It has been built up by more than 150,000 years of volcanic activity.

A cone volcano is the most immediately recognizable mountain-shaped variety, as opposed to shield volcanoes or calderas which are far more flat in shape. 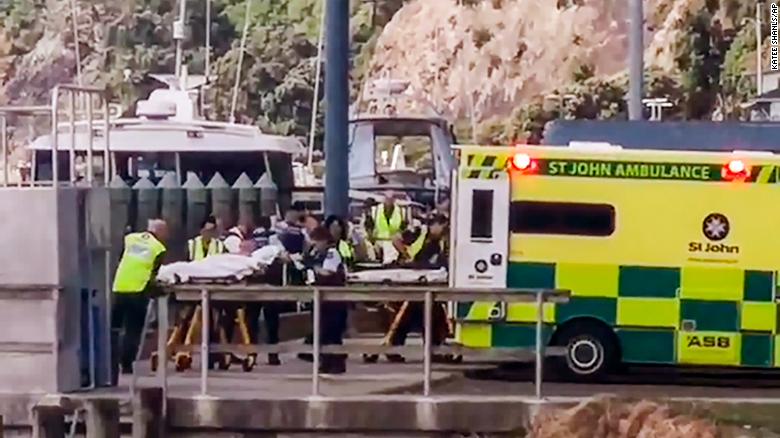 The Volcanic Alert Level was raised to 4 shortly after the eruption, and the Aviation Color code is orange, according to GeoNet. Two hours later it was lowered to level 3, due to "diminished" activity in the area of the volcano.

New Zealand's National Emergency Management Agency said the eruption occurring at White Island is "hazardous in the immediate vicinity of the volcano" and that the agency is assessing the situation with scientific advisers to determine the severity of the threat.

Whakaari/White Island is dubbed "one of the world's most accessible active volcanoes" on a White Island Tours website, which offers ocean cruises near the island and a guided tour depending on the status of the varying volcanic alert levels.

According to the GeoNet website, more than 10,000 people visit the island every year.