For the first time in 9 years, two nation states are going toe-to-toe in Syria Syria's curse, as its conflict rumbles slowly towards its first decade, has always been how new forces enter the war just when it seems that exhaustion might slow everyone down.

But over the past week, a starker evolution has occurred, one that's been lost amid fatigue around the seemingly endless violence. Two of the most influential actors there -- Turkey and the Syrian regime -- have stopped fighting purely through proxies, and instead taken to directly attacking each other.

It is a seismic development: Turkish troops being repeatedly killed by Syrian forces, and then Ankara exacting a revenge toll on Bashar al-Assad's men. The expectation has always been that Moscow -- the forceful, long-term backer of Assad but also the fair-weather and awkward new friend of NATO member Turkey -- would step in and negotiate a pause. But they haven't yet, despite repeated phone calls between Ankara and Moscow. And they might not. 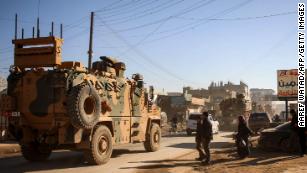 Instead, Turkish President Recep Tayyip Erdogan has raised the possibility of Russian and Turkish fighter jets clashing over the beleaguered province of Idlib.

"Aircraft that hit the civilian population centers in Idlib will no longer be able to fly freely," Erdogan warned Wednesday. By that he means Russian planes, behind much of the indiscriminate bombing of civilians in the tiny enclave (Russia has denied targeting civilians, and said they are used as human shields by extremists).

He's also threatened to take the fight to Syrian regime forces outside of Idlib. A lot of this is Erdogan's boilerplate loud bark, but he has surprised even his allies with his bite before, in taking on the US allies in the fight against ISIS -- the Syrian Kurds -- last year.

To recap, Idlib is the ghastly last wound of Syria's civil war: up to four million civilians trapped in a tiny area, defended and infiltrated partially by al Qaeda-loyal extremist rebels. Western intelligence services see these extremists as a palpable, immediate threat, but don't really know how to handle it. Moscow and Damascus think they do, and are trying to retake the area, bombing everyone in it, including hospitals, and pushing the entire problem north into Turkey.

Assad's forces have killed Turkish troops, more than once, and Turkey has hit back. These have been direct clashes, not the proxy warfare we usually see, in which militia loyal to either side inflict deniable wounds.

It is "a whole new level of state-on-state conflict," said Charles Lister, senior fellow at the Middle East Institute. "And given Erdogan's domestic considerations, it's still hard to see anything but more escalation on the horizon."

Lister said the humanitarian crisis was "totally unprecedented and will definitely only get worse," and added that the possibility Turkey would have to take in some of the displaced meant that an onward traffic of refugees to Europe couldn't be excluded.

For those inside, living for years in something close to hell, even the apocalyptic has an upside. Ahmad al-Abdo, 34, fled the Syrian regime advance north in the last weeks, and said: "anything that can stop the Syrian regime from bombing people is a good thing, yet I am not sure Turkey will use all its power to do this."

They've also heard these promises before. "Syrians have no friends", al-Abdo said. "Sometimes other countries' interests cross with ours. This is the case now, I guess, but that's the extent of it." 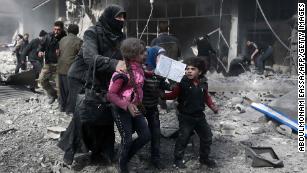 Dozens of people were killed in Syrian airstrikes, a human rights group says

A spokesman for the Turkish-backed Syrian rebels there, Major Yousef Hamoud, called the Turkish military moves "acts of liberation to help the Syrian people. This will hopefully stop the Syrian regime from displacing people."

Erdogan is lurching between a series of appalling options on his long southern border. Its logic for attacking the Syrian Kurds last year was it had to push back against a group it considered an existential terrorist threat, but also provide a haven into which it could repatriate Syrian refugees. It's only partially succeeded. To the west around Idlib, it wants to stem the flow of refugees, but also knows it needs some control over areas where al Qaeda might present a longer-term threat.

Aaron Stein, from the Foreign Policy Research Institute, said: "People keep trying to ascribe some sort of coherent end-game to Turkey. They just do not have one."

A series of agreements brokered with Russian assistance have bought Turkey time, Stein added, perhaps delaying this escalation for the past 500 days. But in the end, he said, Turkey "have to do something. They have been careful to leave room for Russia to engage in dialogue, focusing the brunt of their messaging on the [Syrian] regime and its actions."

But there is minimal chance that Russia will assist, according to Stein. Moscow doesn't want to pull its forces -- or Syrian troops -- back, meaning Turkey has to risk killing Russians if it takes on the Syrian forces more directly. "Ankara's options in this realm range from poor to abysmal," Stein said.

Much of Turkey's poor position stems back to its decision to defy its western allies and attack the Syrian Kurds last year. Stein concluded: "Ankara has isolated itself with its western allies, signed up to a partnership with Russia that was always going to end with Moscow demanding Turkey surrender, and now is out of answers as it faces a serious crisis. Turkey has no good options."

And so now a conflict that has entertained almost every possibility of violence during its nine years, must deal with the as yet unknowable consequences of state battling state openly, and the troubling new chapter that could herald.