Sometime in the next few days, the 100,000th American will succumb to Covid-19 in a pandemic that President Donald Trump once predicted would just "miraculously" disappear.

Yet despite, and perhaps because of, his earlier cavalier attitude, Trump spent the long holiday weekend bemoaning everything but the tragic roll call of death -- while also finding time to claim he got "great reviews" for handling the crisis.

In his most politically significant maneuver, he heaped intense pressure on North Carolina's Democratic governor to permit a normal, crowded Republican National Convention, despite fears such a mass gathering could seed virus hot spots. Trump warned he could pull the huge money-earner out of Charlotte, which was picked to play host in August.

The move came as the President intensified his push for a full reopening of the country and television footage showed packed beaches and boardwalks in some states as Memorial Day crowds fueled fears that social distancing may be breaking down. 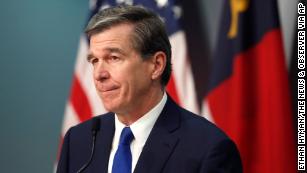 On social media, he waged a weekend of Twitter wars against his critics, targeting a favorite foil, Barack Obama, after Trump's return to the golf course -- his 266th such trip in office -- sparked calls for him to concentrate more fully on the pandemic.

In between Twitter eruptions, a mask-free Trump solemnly presided over Memorial Day ceremonies at Arlington Cemetery, and tweeted a campaign-style video of himself leading observances.

"For as long as our flag flies in the sky above, the names of these fallen warriors will be woven into its threads," he said in a moving speech at Fort McHenry.

"For as long as we have citizens willing to follow their example, to carry on their burden, to continue their legacy, then America's cause will never fail and American freedom will never, ever die."

Yet the scripted solemnity and unifying patriotism only made Trump's explosion of fury on Twitter seem even more surreal, and underlined how he finds it impossible to avoid thrusting himself into the social media feeds of Americans even for a weekend. Indeed, Trump returned to criticizing North Carolina Democratic Gov. Roy Cooper not long after returning to the White House Monday afternoon.

A surreal glimpse into a President's mind

After three years of Trump deliberately trampling the normal codes of presidential behavior -- partly to show supporters he remains an anti-elite outsider, none of this is surprising.

But that doesn't mean it isn't jarring, as the most wrenching moment so far approaches in the nation's battle against a pandemic that while ebbing in terms of total deaths is trending up in 18 states, is steady in 22 and easing in 10 more. More than 98,000 people in the US have now died from the coronavirus and more than 1.6 million have been infected. More than 30 million Americans have lost their jobs and the unemployment rate is approaching Great Depression levels. 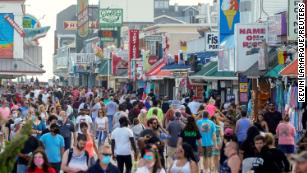 In 50 years, Trump's weekend Twitter blasts may come across as a startling document of a presidency rooted more than ever in personal obsessions, and incessant wars with the media and his increasing throngs of political enemies.

There was little evidence of a deeper meaning to his presidency at this stage than personal and political grievances. Also missing is a more sweeping policy framework for a potential second Trump term. And other than a relentless push to support an aggressive opening of the country, for instance in a new demand for schools to open, Trump seems far less interested in how the task can be accomplished safely -- other than retweeting CDC hand washing advice -- than his boiling political feuds.

No White House could have been fully prepared for the disaster and subsequent economic hollowing of this year's pandemic. But it's also hard to imagine a previous recent president from either party fighting it with the same campaign of denial, distraction and misinformation.

As an example, the most substantive administration action of the weekend was a report to Congress on the state of the pandemic -- which turned over responsibility for a testing and tracing operation that experts say is critical to the states. The report did however include a pledge from the Federal Emergency Management Agency to send out 12.9 million swabs used in coronavirus testing to states in June.

Trump lays down a marker on Republican convention

Trump spent much of Memorial Day, fulminating against Cooper, complaining that the North Carolina governor was "unable to guarantee" the arena for the convention in August can be filled to capacity. The President is determined to deploy the full pageantry of convention season to portray a nation and economy in the full throes of what he calls a "transition to greatness." His ambitions appear to spring from a similar mindset to his refusal to wear a mask in public to avoid undercutting his narrative of reopening.

The comparison could be striking if the Democrats hold a neutered social distanced convention or put most events online in a way that would deprive presumptive Democratic nominee Joe Biden of his big moment before a big crowd and a primetime TV audience. 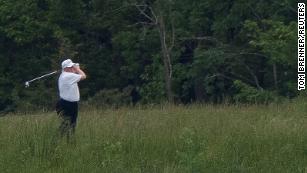 Yet such a spectacle as the Republican convention seems utterly incongruous with real-world events. Sports teams that use such arenas are expecting to play without fans for at least months in a bio-secure environment. The prospect of thousands of delegates pouring into convention cities from all over the country, including coronavirus hotspots, is a huge headache for organizers. After delegates spend hours or days packed together they then could return home to cause new outbreaks.

"Unfortunately, Democrat Governor, @RoyCooperNC is still in Shutdown mood & unable to guarantee that by August we will be allowed full attendance in the Arena," Trump tweeted Monday.

"In other words, we would be spending millions of dollars building the Arena to a very high standard without even knowing if the Democrat Governor would allow the Republican Party to fully occupy the space."

Cooper told CNN last week that the convention would be treated like any other event and decisions would be made based on the advice of health officials, data and science.

It was not immediately clear whether Trump and the Republican National Committee are serious about pulling the convention from Charlotte. The chances or organizing such a massive event elsewhere seem slim at this late stage -- especially as other major cities and arenas are also dealing with the virus.

But given that the Tar Heel State is a vital battleground in November, Trump may accrue political benefit from a base-stoking campaign against local Democrats.

North Carolina reported its biggest spike in cases on Saturday, though as is the case with each state it is sometimes hard to tell whether such rises represent a worsening epidemic or a rise in testing. It has not been one of the worst affected states, but deaths have been rising again in recent days.

The soap opera nature of Trump's presidency was also reflected this weekend in his defense of his decision to play golf for the first time since March at his Virginia golf club.

The debate over presidents and their trips to the links has become a tedious ritual that sees partisans adopt positions according to which party is in power.

"Some stories about the fact that in order to get outside and perhaps, even a little exercise, I played golf over the weekend. The Fake & Totally Corrupt News makes it sound like a mortal sin," Trump tweeted, complaining that Obama flew Air Force One to Hawaii for his annual vacation when he often played golf.

Trump has used federal resources multiple times to fly to his resorts and golf courses. Trump's two rounds this weekend struck critics as inappropriate during a national crisis and on a weekend when American remembers its war dead.

"Nearly 100,000 lives have been lost, and tens of millions are out of work. Meanwhile, the president spent his day golfing," Biden wrote in a tweet accompanying an online ad Saturday.

The perennial debate over golf and presidents raises the question whether presidents should put the clubs away and foreswear other hobbies during four or eight years in office, or whether they have a right to enjoy some free time out of the bubble of the White House. President George W. Bush for instance decided not to play golf during much of his presidency fearing poor optics after sending Americans off to war.

Trump may not come under such criticism had he not been so dismissive of Obama's afternoons on the golf course -- and saying he wouldn't have time to play golf if he was elected president.