The US is more alone than ever, just at the moment the world needs its leadership The United States is in uncharted territory, on an exponential path to becoming a Covid-19 pariah and an unreliable ally to its friends.

America's fall in global esteem is turning into an international horror show as the world watches the superpower struggle to match the efforts of many poorer nations to get the coronavirus pandemic under control. 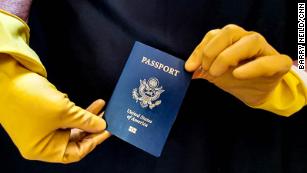 Three-and-a-half years of President Donald Trump in office has changed America's international reputation and perhaps its future role in a way that seemed unimaginable when he took the oath of office on the steps of the US Capitol on January 20, 2017.

He set the tone in the drizzle that day: "We must protect our borders from the ravages of other countries making our products, stealing our companies, and destroying our jobs."

A daily analysis of US politics for global readers.

By subscribing, you agree to our

Three days after his inauguration, he abandoned the Trans-Pacific Partnership, a potentially lucrative 12-nation Pacific trade deal. Executive Order 13769 swiftly followed, banning citizens of seven Muslim nations from travel to the US. 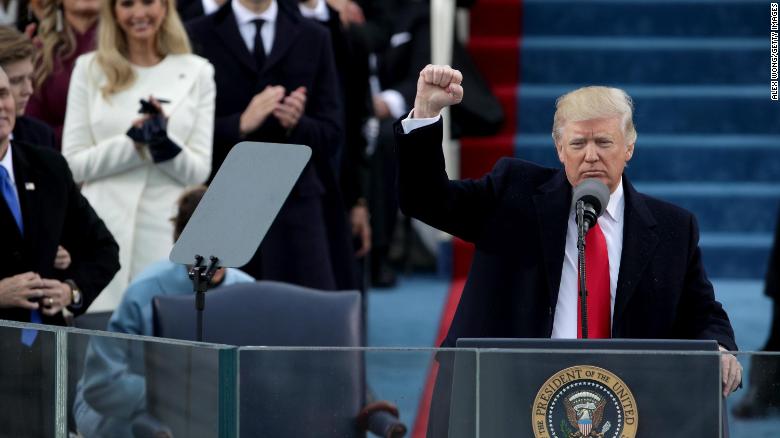 Three-and-a-half years after the inauguration of President Trump, America's international reputation has changed beyond belief.

So when European Union leaders gathered in Malta for an emergency summit in February 2017, "America First" was very much on their minds. EU Council President Donald Tusk wrote to the bloc's leaders: "The change in Washington puts the European Union in a difficult situation; with the new administration seeming to put into question the last 70 years of American foreign policy."

Europe's matriarch and often its moral compass Angela Merkel declared: "Europe has its destiny in its own hands. And I believe the stronger we state clearly how we define our role in the world, the better we can take care with our transatlantic relations." 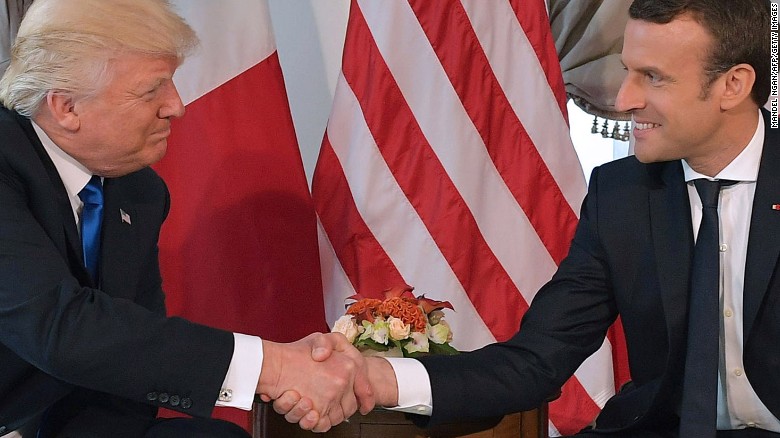 Donald Trump and Emmanuel Macron shake hands ahead of a working lunch on the sidelines of the NATO summit in Brussels, on May 25, 2017.

Three months later -- on his first overseas trip -- Trump proved Merkel right. At NATO HQ in Belgium, on May 25, the President not only roasted Merkel over Germany's performance on trade and attacked his allies for failing to meet NATO funding targets but showed shocking disdain for his peers, pushing past Montenegro's PM Dusko Markovic and giving a very frosty handshake to newly minted French President Emmanuel Macron. 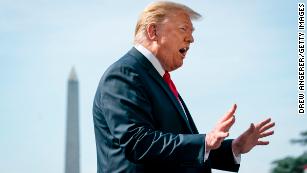 His coup de grace at NATO HQ that day was failing to endorse the alliance's founding principle, its Article 5, under which it is obliged to protect each and every one of its members.

Three-and-a-half years of Trumpian vacillations later, NATO's upper echelons privately fear that a second Trump term could lead to "the effective end" of NATO. Those fears hit the front burner two weeks ago when Trump announced pulling 9,500 troops from bases in Germany. Angela Merkel had not been notified.

Last week one senior NATO source told me if Trump is re-elected it would be "extremely bad news" and could "fundamentally f**k up the alliance". It would not cease to exist but the concept of transatlantic deterrence would "no longer be fit for purpose."

What Trump is proposing, the source said, is "very real, it is a lot of troops." And it was emblematic of a larger problem, that "the US can't be relied on."

That vein of often mercurial unilateralism has been the trademark of Trump's first term. His doctrine of America-first, multilateralism-last has shifted Washington from being the global center of gravity that generations of American policymakers built, to an unreliable centrifugal force in danger of scattering democratic forces. 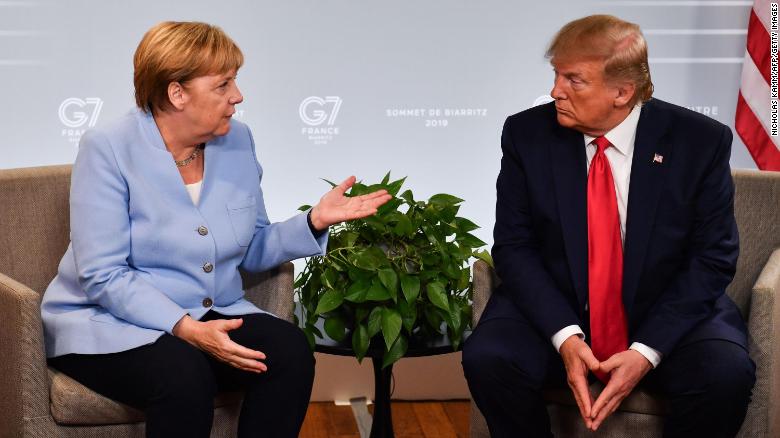 Trump showed shocking disdain for his peers: German Chancellor Angela Merkel speaks with the President during a bilateral meeting in Biarritz, south-west France on August 26, 2019, at the G7 Summit.

In capitals across the world, Trump's impact has become the endless hangover. The global village is in a semi-permanent spin, the geopolitical furniture rarely where it was the night before.

The heap of pressing international issues -- climate change, the coronavirus and the economic meltdown it threatens, the inexorable rise of China -- teeters to the point of collapse.

How much America is "on the outs" can no longer be hidden. When it comes to international cooperation, Europe is now as likely to side with China as it is with the White House. Not least because of Trump's utter unpredictability, whether on Syria, North Korea, trade or NATO. 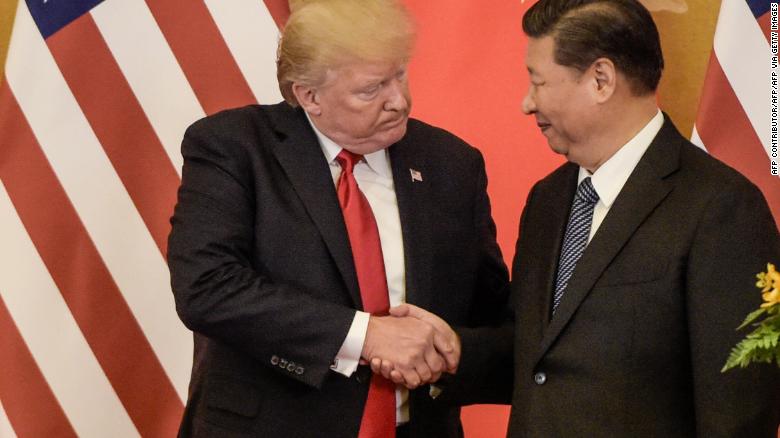 When it comes to international cooperation, Europe is now as likely to side with China as it is with the White House.

In January, Trump praised China's handling of Covid-19, saying: "I think our relationship has never been better. We're very much involved with them, right now, on the virus that's going around."

But by the end of April, the White House wanted China castigated and punished for failing to warn the world about the pandemic.

At a vote last month during the World Health Organization's annual meeting, Europe resisted US pressure to demand an investigation into how China had handled the pandemic, while Trump railed that WHO was a Chinese puppet.

And worse, Trump's own actions have rendered his opinions on fighting the virus almost worthless. It's not just that he's suggested ingesting bleach or taking the drug, hydroxychloroquine, against most health guidelines. But stacked up against China, America is failing its people. 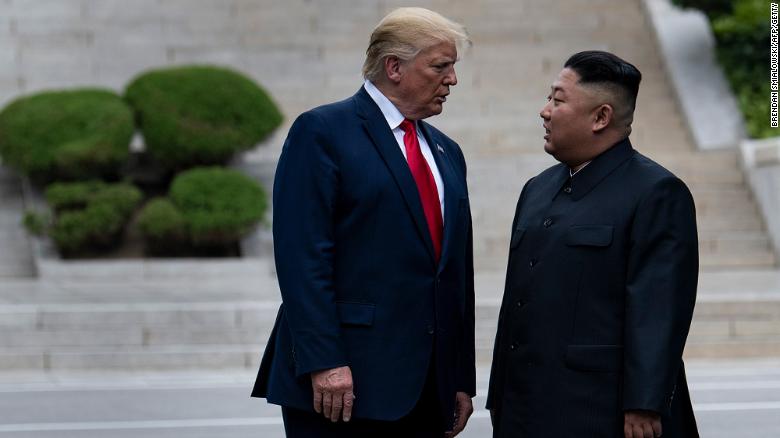 If Covid-19 were Trump's only crisis, the world might be a bit more forgiving. But in his presidency he has jangled nerves around the world more than any of his recent predecessors.

He pulled out of the global climate change agreement, quit the JCPOA -- the multilateral deal constraining Iran's nuclear ambitions, started a trade war with China, has another brewing with Europe. He toyed with sparking conflict against Iran and has had a turbulent on-again, off-again relationship with Kim Jong Un in North Korea, as well as spats with most major multinational bodies, from the UN to the IMF and more.

On top of all that, he seems barely capable of criticizing powerful dictators. On his watch, China and Russia have both moved towards leaders for life in presidents Xi Jinping and Vladimir Putin. 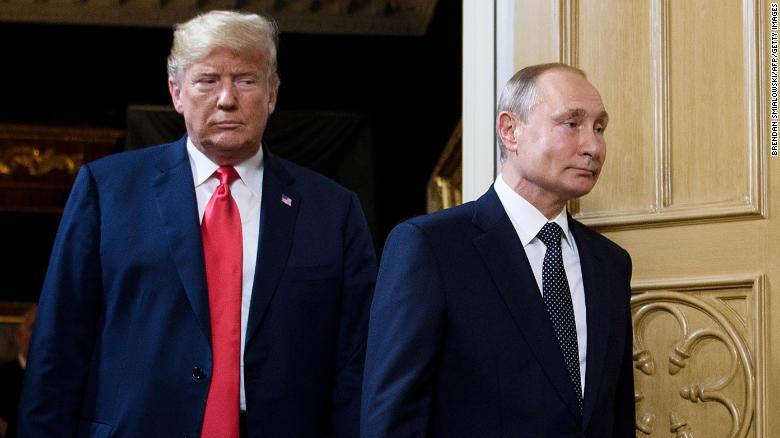 China and Russia have both moved towards leaders for life in presidents Xi Jinping and Vladimir Putin, seen with President Trump at Helsinki, on July 16, 2018.

By Independence Day next week, the United States will perhaps be more alone than it has been in decades. Trump has cut many of the ties that have bound the country to expected international norms, but it is coming at a cost to the rest of the world.

But Trump's unorthodox unreliability may have met its match in Covid-19. Unlike many other leaders, a virus can't be browbeaten. As infection numbers rise in more than 30 US states, the world's willingness to turn a blind eye to the US President's obvious failings is fast evaporating.

As the biggest global economy, US failure to rein in the pandemic will affect us all. More than at any time in recent history, the rest of the world has a stake in an American course correction.

Short of the highly improbable -- that Trump acknowledges his failings in directing America's response to Covid 19 -- Washington's allies will have to wait until November for the possibility of deliverance.

This story has been updated to correct the location where Donald Trump took the oath of office.