Dr. Anthony Fauci says he would "settle" for a Covid-19 vaccine that's 70% to 75% effective, but that this incomplete protection, coupled with the fact that many Americans say they won't get a coronavirus vaccine, makes it "unlikely" that the US will achieve sufficient levels of immunity to quell the outbreak.

With government support, three coronavirus vaccines are expected to be studied in large-scale clinical trials in the next three months.

"The best we've ever done is measles, which is 97 to 98 percent effective," said Fauci, the director of the National Institute of Allergy and Infectious Diseases. "That would be wonderful if we get there. I don't think we will. I would settle for [a] 70, 75% effective vaccine."

A CNN poll last month found one-third of Americans said they would not try to get vaccinated against Covid, even if the vaccine is widely available and low cost. 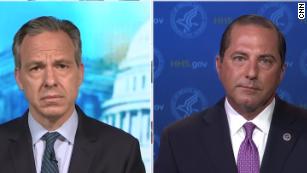 'Window is closing' for US to get coronavirus under control, Trump's HHS secretary warns

In an interview Friday, CNN asked Fauci whether a vaccine with 70% to 75% efficacy taken by only two-thirds of the population would provide herd immunity to the coronavirus.

Herd immunity is when a sufficient proportion of a population is immune to an infectious disease, either through prior illness or vaccination, so that spread from person to person unlikely.

Coronavirus vaccine education effort 'not going to be easy'

Fauci noted that "there is a general anti-science, anti-authority, anti-vaccine feeling among some people in this country -- an alarmingly large percentage of people, relatively speaking."

He said given the power of the anti-vaccine movement, "we have a lot of work to do" to educate people on the truth about vaccines. 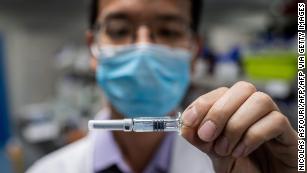 "It's not going to be easy," he said. "Anyone [who] thinks it will be easy is not facing reality. It's going to be very difficult."

Fauci said the government has a vaccine education program to counteract anti-vaccine messages.

"We have a program right now that's going to be extensive in reaching out to the community," he said. "They may not like a government person in a suit like me telling them, even though I will tell them. They really need to see people that they can relate to in the community -- sports figures, community heroes, people that they look up to."

But there's no indication that such a program is in place.

The US Centers for Disease Control and Prevention runs many federal health education programs, but agency spokeswoman Kristen Nordlund referred CNN to the US Department of Health and Human Services, which runs Operation Warp Speed, the Trump Administration effort to develop a Covid-19 vaccine.

In an email, Michael Caputo, an HHS spokesman, did not confirm the existence of a vaccine education campaign, adding that "I'd hate to see CNN put out [a] wildly incorrect story."

Fauci gives some states a C for coronavirus efforts

Fauci made his comments about vaccines during a wide-ranging interview with CNN that was part of the Aspen Ideas Festival and aired Sunday night.

When asked what grade he would give the country for handling the coronavirus outbreak, Fauci said some states were doing better than others. 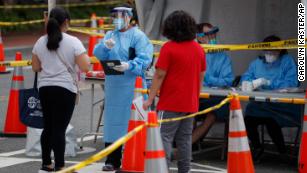 The coronavirus pandemic has moved into younger populations in US, CDC says

He singled New York out for doing "really well," but declined to name the "C" states.

"There are some states in which the leadership and the decision [to open up] was a little too precipitous," he said. "There are others when the leadership did it right, but the citizenry didn't listen to them.

Fauci said in states where you can see people congregating closely without using masks, "that's a recipe for disaster."

He added that he understands that people, especially young people, want to be together after months of lockdown. He warned those people that they're "not in a vacuum." 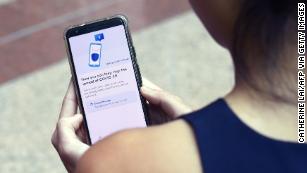 Contact tracing 101: How it works, who could get hired, and why it's so critical in fighting coronavirus now

Until there's a vaccine, one key to controlling the virus is contact tracing, the public health practice of trying to contain an outbreak by isolating infected people, asking them with whom they've had contact while they were infectious, and then quarantining those contacts.

When asked how the United States is doing with contact tracing, Fauci answered, "I don't think we're doing very well."

"If you go into the community and call up and say, 'how's the contact tracing going?' the dots are not connected because a lot of it is done by phone. You make a contact, 50% of the people because you're coming from an authority don't even want to talk to you," he said.

He recommended that communities "get boots on the ground and to go out there and look for the people, instead of getting on a phone and doing so-called contact tracing by phone."

Sign up here to get The Results Are In with Dr. Sanjay Gupta every Tuesday from the CNN Health team.

But he added that contact tracing is hindered by the fact that so many people who are infected with coronavirus don't have symptoms, and since they don't know they're sick, it's impossible to trace their contacts.

He said in areas where the virus is spreading in the community, 20% to 40% of those who are infected are asymptomatic.

"When you have community spread, it's insidious because there are so many people in the community who are infected but asymptomatic," he said. "So the standard classic paradigm of identification, isolation, contact tracing doesn't work no matter how good you are because you don't know who you're tracing."