If Beijing thought a new national security law would guarantee a quiet birthday for Hong Kong, it was mistaken.

As the city marked 23 years of Chinese rule Wednesday, and less than 24 hours under the new reality of the national security law -- which criminalizes secession, subversion, terrorism, and collusion with foreign forces -- thousands of people defied a police ban to take to the streets.

While they were nowhere near the size of previous July 1 protests, there was disruption and disorder in at least four districts, tying up thousands of police officers and causing traffic chaos. Police said around 370 people were arrested Wednesday, including 10 people under the new national security law.

"These people are suspected of inciting or abetting others to commit secession," the spokesman said. Such a charge could carry a term of life imprisonment, and a minimum 10 years behind bars for principal offenders, or three years for those who "actively participate" in the offense. One of those arrested was a 15-year-old girl. 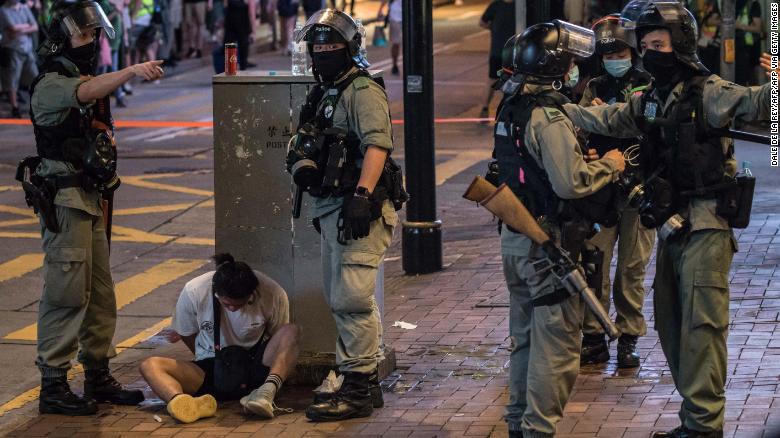 Riot police detain a man after they cleared protesters taking part in a rally against a new national security law in Hong Kong on July 1, 2020.

What happens to those 10 people arrested could define how the law is applied in Hong Kong, and the degree of chilling effect or repercussions it has on wider society. Will prosecutors seek the harshest punishments, or even transfer the cases to Chinese jurisdiction, as permitted under the law? And what legal challenges will the law face as the cases wind their way through court?

Authorities are likely to be prepared for those early test cases, as evidenced by the police who were briefed ahead of time to arrest anyone promoting Hong Kong independence. While the size of the crowds made complete control difficult, police responded heavily to Wednesday's protests, firing pepper spray at crowds, kettling protesters and using water cannon.

Videos shared online showed the water cannon used against journalists apparently without cause. Police said several officers were injured by protesters, including one who was stabbed in the arm.

The 24-four-year-old suspect in that case was grabbed in a dramatic midnight arrest as he boarded an international flight to London. Police said he was held on suspicion of wounding, a charge that carries a potential life sentence. 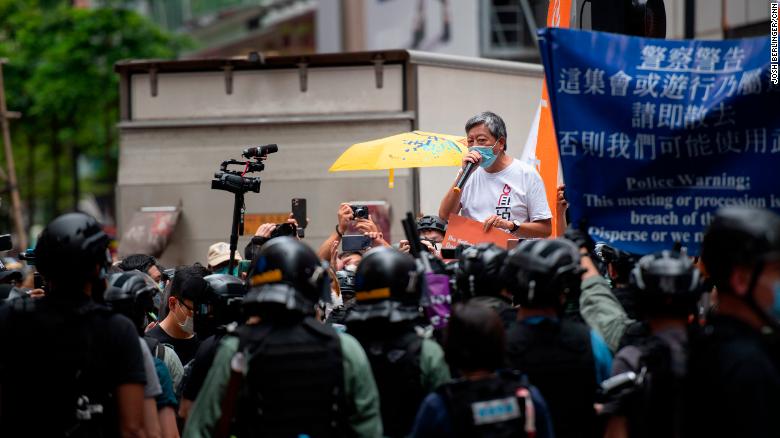 Former lawmaker and longtime activist Lee Cheuk-Yan is seen addressing a crowd in Causeway Bay as riot police stand in the background. He was arrested soon after.

The severe nature of the punishments under the new law had an immediate and widespread chilling effect after its passage, with political parties disbanding, people scrubbing their social media and whatsapp chat history, and businesses disavowing previous support for the protest movement. Even the size of Tuesday's protest could be considered a measure of its effectiveness. But fear alone was not enough to stop people coming out altogether.

"I'm very afraid, but I'm still here," said Lawrence Lau, a barrister and district councilor. While he said he never had any doubt about taking part in Wednesday's protest, he added "if you are a rational being, you must fear, and you must be afraid of the adverse consequences." 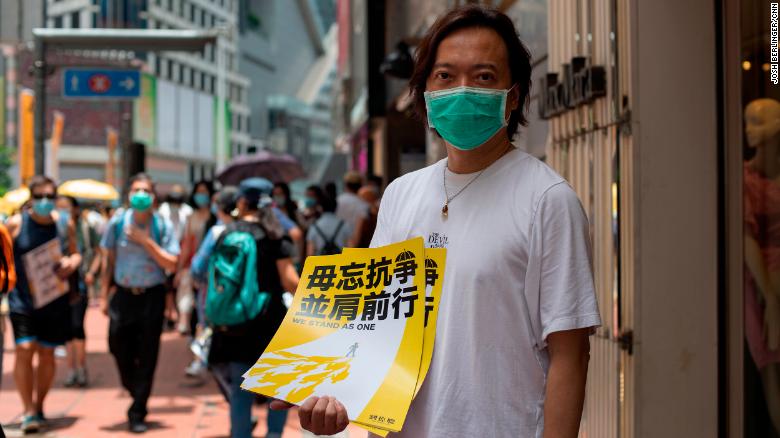 District Councilor and barrister Lawrence Lau holds up a poster in the Hong Kong district of Causeway Bay, shortly before police started clearing the area, on Wednesday.

Many people were still wary of the potential repercussions, even as they exposed themselves to potential arrest. One woman who declined to give her name said "it will be hard not to self censor when there's something like this going on."

"I feel like most people would be more cautious with what they say," she added.

One thing she said would change would be how Hong Kongers use the internet, adding she was planning to use a VPN and secure apps more often. Samuel Woodhams, Researcher at the London-based internet research firm, Top10VPN, said in an email that there had been a 321% rise in demand for VPNs on June 30 compared the rest of the month's daily average. 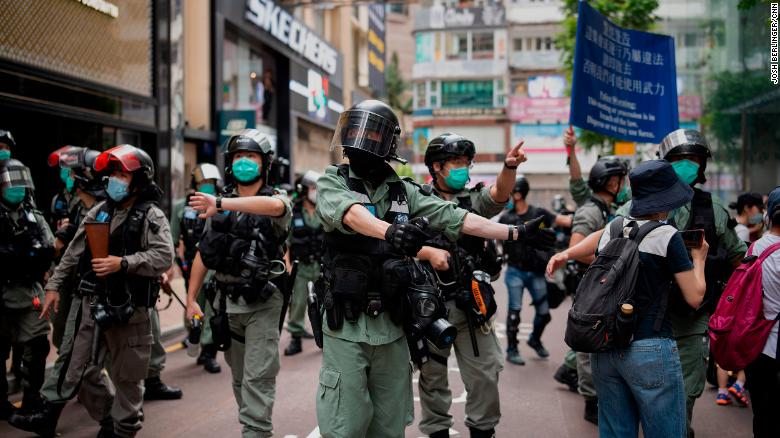 Police in riot gear are seen outside Hysan Place, an upscale shopping mall in Causeway Bay, ordering people to disperse.

The boundaries of the national security law are still very unclear, given the broad nature of the offenses and lack of case law.

In a statement Wednesday, the Hong Kong Bar Association said it was "gravely concerned with both the contents of the (law) and the manner of its introduction."

It added that the offenses created by the law are "widely drawn" and lacking "basic safeguards as to legal certainty and fair treatment, (and) are capable of being applied in a manner that is arbitrary, and that disproportionately interferes with fundamental rights, including the freedom of conscience, expression and assembly."

Some clarity will presumably come when prosecutions begin from the arrests Wednesday, though it is unclear how prepared the judiciary is for such cases. One controversial element of the law is that the city's leader is to nominate select judges to hear national security cases. They can be removed if they make any statements deemed detrimental to national security, something the Bar Association said harmed judicial independence.

Zhang Xiaoming, deputy director of the Hong Kong and Macao Affairs Office of China's State Council, confirmed another controversial element of the law Wednesday, saying that suspects prosecuted by Chinese agents acting in the city will be tried on the mainland -- effectively permitting the extradition of Hong Kong residents across the border, the very issue which kick-started widespread protests in the city last summer. 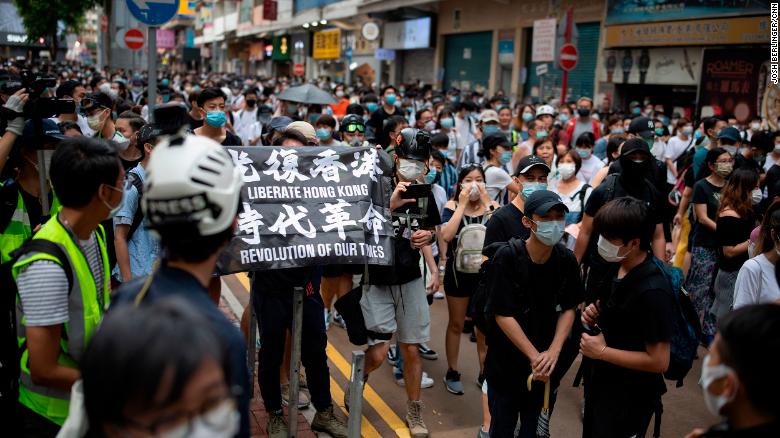 Passers-by and protesters gather in Causeway Bay, Hong Kong. A protester is seen carrying a flag that says "Liberate Hong Kong, revolution of our times," an act that could now be considered a crime under the city's new national security law.

The passage of the law Tuesday was met with widespread criticism from the international community.

In a statement, United States Secretary of State Mike Pompeo blasted the "draconian national security legislation" and "Beijing's paranoia and fear of its own people's aspirations" which he said had "led it to eviscerate the very foundation of (Hong Kong's) success."

On Wednesday, however, Hong Kong's top official, Chief Executive Carrie Lam, pushed back, arguing the law was a "crucial step to ending chaos and violence that has occurred over the past few months" in the city.

"The national security law is the most important development in securing ties between China and the Hong Kong Special Administrative Region since the handover," she said, framing criticism of the law as "vicious attacks."

Washington has said it will move ahead with visa restrictions against those responsible for the law, and has ended a number of deals with Hong Kong that classed the city more favorably than China. 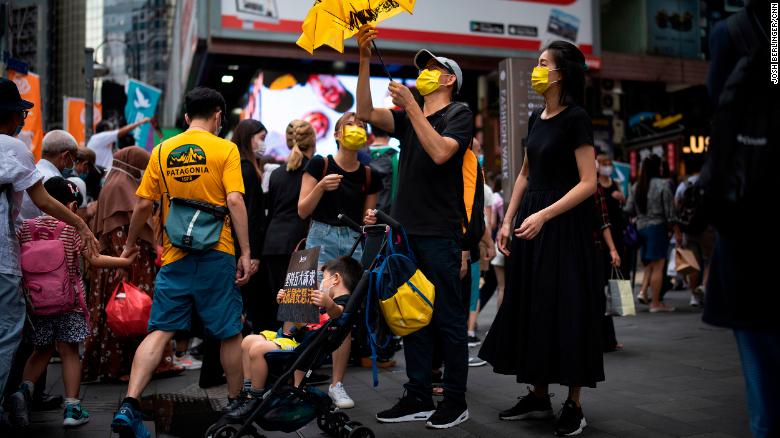 A family in Causeway Bay is seen with signs and yellow paraphernalia, the color of the pro-democracy movement.

The United Kingdom, which ruled Hong Kong as a colony for 150 years, also condemned the law and said it would offer a path to citizenship for eligible Hong Kong residents.

"We made clear that if China continued down this path we would introduce a new route for those with British National Overseas (BNO) status to enter the UK, granting them limited leave to remain with the ability to live and work in the UK and thereafter to apply for British citizenship -- and that is precisely what we will do now," British Prime Minister Boris Johnson said Wednesday.

The UK's Foreign Office said in a news release that "this new bespoke immigration route" would mean eligible Hong Kong residents could move to the UK without the current six month limit, and would have five years limited leave to remain, with the ability to live and work in the UK.

As of February 24, 2020, there were 349,881 holders of BNO passports and the UK government estimates there are around 2.9 million BNOs currently in Hong Kong.

China's Ambassador to the United Kingdom, Liu Xiaoming, hit out at the plan Wednesday, calling it a "gross interference in China's internal affairs."

"China remains unwavering in its determination to safeguard its national sovereignty, security and development interests," Liu said in a statement. "The Chinese side urges the UK side to immediately stop interfering in Hong Kong affairs, which are internal affairs of China.

Countries also expressed concern over the potential ramifications of the law for their own citizens. The law covers acts against national security committed overseas, and includes provisions for the expulsion of non-permanent residents.

On Wednesday, Canada updated its travel advice for Hong Kong, warning its citizens that they "may be at increased risk of arbitrary detention on national security grounds and possible extradition to mainland China."