Thailand's government arrested several prominent protest leaders and announced a ban on gatherings of more than five people under an emergency decree Thursday aimed at quelling pro-democracy demonstrations that have gripped the country for more than three months.

The decree, which came into effect in the capital Bangkok at 4 a.m. local time, was enforced after thousands of protesters marched from the city's Democracy Monument and broke through a police barricade to camp outside Prime Minister Prayut Chan-o-cha's offices late Wednesday. Demonstrators were calling for Prayut's resignation and reform of the monarchy.

"As it has appeared that there have been several groups inviting, inciting and committing illegal assembly," the decree read. "There have been activities which affected the public's peace and order." 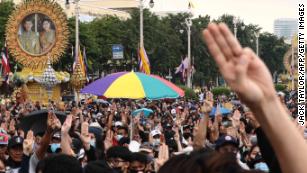 Thailand's unprecedented revolt pits the people against the King

The government also cited protesters obstructing a royal motorcade as reason for the emergency decree. Video from the scene showed police pushing back protesters who were shouting and making the defiant three-fingered salute from the "Hunger Games" movies as a car carrying Queen Suthida and King Maha Vajiralongkorn's youngest son, Prince Dipangkorn, slowly drove past.

"Therefore, there are enough grounds to believe that violent acts have been committed. And this has affected the government's stability, safety, property and staff. This is no longer a peaceful assembly as it should be warrant by the constitution," the decree added.

Along with limiting groups to five people, the emergency decree includes a nationwide ban on publishing and broadcasting news and information -- including online -- that incites fear among the public. Assigned officers will now be permitted to implement new traffic rules and close certain premises to the public. 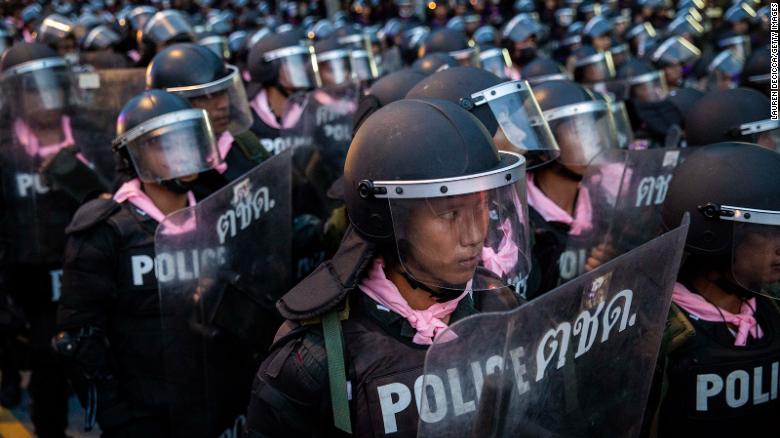 Thai riot police force protesters to retreat away from Government House on October 15, 2020 in Bangkok, Thailand.

Student leader and activist Panusaya "Rung" Sithijirawattanakul, 21, was searched by officers in plain clothes at a hotel near the protest site then arrested in connection with a speech she made in August, the lawyers' group said.

Human rights lawyer and protest leader Arnon Nampa was arrested Thursday morning following a speech he made in the northern city of Chiang Mai on Wednesday.

And Panupong Jadnok was also arrested Thursday morning, though it's not clear why he was detained. Panupong and Arnon have been arrested once before this year in connection with the protests.

On August 10, Panusaya stood on a stage and publicly delivered a 10-point list of demands for reform to the monarchy. Panusaya is spokesperson for the student union group United Front of Thammasat and Demonstration, and their demands include revoking laws against defaming the monarchy, a new constitution, abolishing royal offices, ousting the military-led government and disbanding the King's royal guards.

Student-led protests that have been ongoing across Thailand since July have escalated in recent weeks. Protesters, which now include a large cross-section of society among their ranks, are calling for a new constitution, the dissolution of parliament and resignation of Prime Minister Prayut, as well as an end to intimidation of government critics. 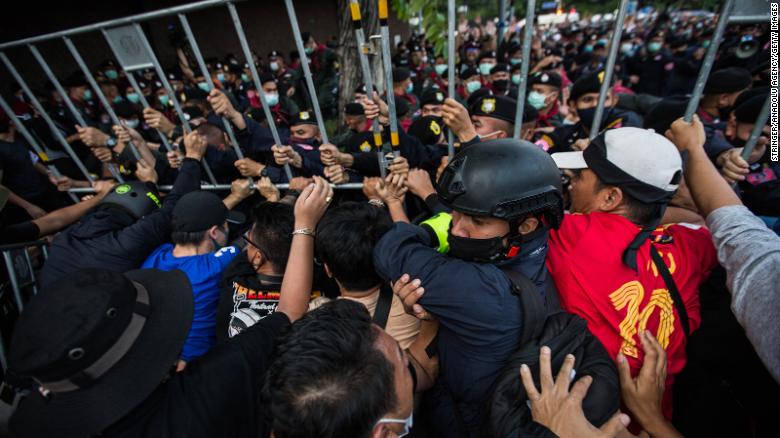 Pro-democracy protesters seen pushing back Thai police during an anti-government demonstration on October 14, 2020 in Bangkok, Thailand.

But an increasingly central demand is reforming the monarchy to curb King Vajiralongkorn's powers and ensure a true constitutional monarch under a democratic system.

It's the biggest challenge to the ruling establishment in decades, with young people publicly breaking entrenched taboos on speaking openly about the royal family in public. Thailand has some of the world's strictest lese majeste laws, and criticizing the King, Queen, or heir apparent can lead to a maximum 15-year prison sentence.

The King, who spends much of his time overseas, returned to Thailand this week for a host of royal duties, including marking the memorial day of his father, the late King Bhumibol Adulyadej.

King Vajiralongkorn was confronted by protesters for the first time Tuesday. After a demonstration outside the Prime Minister's offices was broken up by police with 21 protesters arrested, the King's convoy drove past demonstrators who shouted "release our friends" and gave the three-fingered salute.

Authorities had stepped up security the following morning, deploying about 15,000 police to control crowds. As protesters gathered, they were met by lines of royalist groups who had turned out dressed in yellow -- the color of the monarchy. 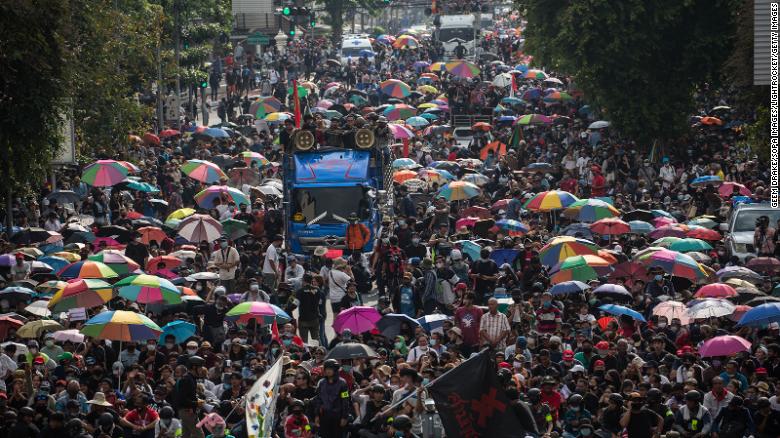 Protesters seen walking toward Government House during an anti-government demonstration in Bangkok.

"I am here to show my respect to the King," said 65-year-old Nid, a private business owner from Bangkok. Of the protesters, he said "they should go back home and focus on their studies. Our country has three pillars; nation, religion and the monarchy. They should know that."

There were questions over whether protesters could once again muster the big crowds seen at previous rallies but as Wednesday wore on, thousands of people joined the march -- with hundreds staying overnight outside Government House.

On Thursday morning, protest group Free Youth called on people to defy the gathering ban and join an afternoon demonstration in Bangkok, saying in a statement on Facebook that, "high school and university students, workers and general people have assembled peacefully and have not started any violence."

"But it is clear now the government has intentionally used the monarchy as a tool to get rid of those who are calling out for their better future, the future with equality and no more disparity," the group said.

While the student-led movement has suffered a setback with the arrest of its core leaders, it "is likely to maintain traction," said Thitinan Pongsudhirak, political scientist and director of the Institute of Security and International Studies at Chulalongkorn University.

"Popular grievances are so wide and deep as traditional Thai institutions, such as military, monarchy and judiciary, have impeded reform and change that can enable Thailand to move ahead," he said.

He added that Wednesday's scenes were "an overdue and pent-up showdown that was kept under the lid during the last reign. This is Thailand's grinding transformation to arrive in the 21st century."