Members of the Michigan state legislature's Republican leadership who met with President Donald Trump at the White House Friday afternoon said they haven't seen any evidence that would change the fact that President-elect Joe Biden won their state.

It was a blow to Trump, who had invited the lawmakers to the White House this week, as he seeks to subvert the will of voters in a long-shot effort to overturn the results of an election he lost. The President's efforts to pressure local leaders, which earned sharp criticism even from some Republicans, come as his legal team's options to challenge election results in states he lost are rapidly evaporating and as states move to certify their election results.

The GOP lawmakers who met with Trump on Friday committed to letting that certification process play out and undercut the false claims of nationwide voter fraud that Trump and his allies have continued to peddle.

"As legislative leaders, we will follow the law and follow the normal process regarding Michigan's electors, just as we have said throughout this election," Senate Majority Leader Mike Shirkey and Michigan House Speaker Lee Chatfield said in a joint statement after the meeting.

A person familiar with Friday's meeting said the session was cordial as the group explained to the President the process for certifying the election and assigning electors in their state. Trump did not apply any overt pressure on the lawmakers to try and shift electors from Biden to himself, or to prevent the vote from being certified, the person familiar with the meeting said, but the President did appear interested in the explanation the lawmakers offered.

"Michigan's certification process should be a deliberate process free from threats and intimidation," the lawmakers said in their statement. "Allegations of fraudulent behavior should be taken seriously, thoroughly investigated, and if proven, prosecuted to the full extent of the law. And the candidates who win the most votes win elections and Michigan's electoral votes. These are simple truths that should provide confidence in our elections."

The leaders said they also talked about Covid-19 relief with the President, and delivered a letter requesting more federal funds to fight the pandemic. They also said that they had accepted Trump's invitation to the White House meeting "as we would accept an invitation from any sitting President if asked to meet at the White House."

State House Speaker-elect Jason Wentworth was also scheduled to attend, a source familiar said ahead of the meeting. 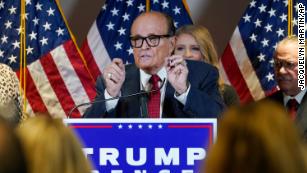 There are also discussions currently underway with Trump about inviting Republican state legislators from Pennsylvania to the White House, two sources told CNN.

It's not clear if those invitations have been extended yet, but Trump has expressed interest in doing so as he tries to insert himself into the vote certification process. The deadline for counties in Pennsylvania to certify their totals is Monday.

RELATED: Inside Rudy Giuliani's attempt to sow chaos on behalf of Trump and steal the election

White House press secretary Kayleigh McEnany earlier on Friday would not say what Trump was planning to discuss with the Michigan lawmakers.

"This is not an advocacy meeting. There will be no one from the campaign there. He routinely meets with lawmakers from all across the country," McEnany said.

Despite McEnany's claim that campaign officials would not attend, Giuliani, who has been leading the campaign's legal effort, had told Fox 5 New York he would be at Friday's meeting. But ahead of the meeting, an official familiar with the situation told CNN that Giuliani would no longer attend because he was in contact with someone with coronavirus.

Giuliani is self-isolating in Washington, DC, after his son, Andrew -- a special assistant to the President -- tested positive for coronavirus Friday morning.

Trump campaign lawyer Jenna Ellis tweeted Friday that both she and Giuliani tested negative for the coronavirus, adding, "The entire legal team will continue to follow the advice and protocols of our doctors."

Certification is usually a formality, but Trump is trying to block or delay the process in key states as part of a long-shot effort to overturn his election defeat through the Electoral College. Giuliani and other allies have suggested that GOP state legislatures in battleground states Biden won should try to use a delay in certification to appoint their own slate of electors and ignore the states' popular votes for Biden.

Black voters in Michigan are now suing the President and his campaign, claiming his bid to pressure state and local officials to block popular votes for Biden violates the Voting Rights Act. They say the pressure campaign to give electoral votes to Trump, despite Biden's statewide wins, specifically seeks to disenfranchise Black voters.

Trump extended the invitation on Wednesday evening to the Michigan lawmakers by calling Shirkey.

Shirkey has not responded to emails from CNN, and his phone mailbox was also full.

Both Shirkey and Chatfield have said that they will honor their state's popular vote and not stray from the process of how electors in Michigan are selected. Biden currently has a 154,187 vote lead over Trump in the Great Lakes State.

On September 24, Shirkey led the Senate to pass a resolution assuring that electors will vote for the candidate with the most votes as certified by election officials. 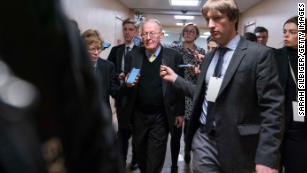 "The Michigan Senate commits to the selection of electors to the Electoral College that will be faithful to voting for the candidate with the most votes for President in Michigan as certified by Michigan election officials," the resolution read.

Meanwhile, a growing number of veteran GOP lawmakers are objecting to Trump's tactics. Rep. Fred Upton, a senior Michigan Republican who was targeted by Democrats but won his reelection bid by 16 points, said, "Yeah. I think it's all said and done."

"No one has seen any real identification of any real fraud," Upton said,

This story has been updated with additional developments.