How Chile became a leader in Covid-19 vaccination It was late May. The world was helplessly watching as the Covid-19 pandemic advanced unimpeded country after country in what would later be called "the first wave" of infections. After China, Italy and the UK had become the virus hotspots, cities in the United States, especially New York, followed. And then in late spring, the coronavirus spread throughout South America.

By May 27, Chile, along with Peru, had reached the world's highest infection rates per capita over a seven-day rolling average, according to Our World in Data (OWID), an independent statistics website headquartered at Oxford University. Chile was rapidly approaching 80,000 infections and more than 800 people had already died by then.

Fast forward nine months and the Chile is in a totally different category. While some Latin American countries like Nicaragua have yet to receive any vaccine, the Andean nation of 19 million had already given more than one million vaccine doses by February 9th. It hit two-million Monday and the immunization pace continues to improve. 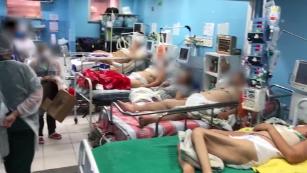 It's doing even better than the European Union (5.19) and China (2.82) and its rate is four times better than Brazil, which has the second best rate in Latin American (2.77), according to data from Oxford University's "Our World in Data" database.

How was Chile able to turn things around so dramatically?

First, its government decided very early on to spare no effort in acquiring a vaccine... any vaccine. The Chilean government has arranged for the purchase of 35.7 million doses so far, which means that it will have the ability to vaccinate more than 90 percent of its population.

According to Chilean Health Minister Dr. Enrique Paris, the country has acquired or is in the process or receiving 10 million doses of the Pfizer/BioNTech vaccine and an additional 10 million from Sinovac. The country later reached agreements with Covax (WHO), Johnson & Johnson and Astrazeneca to reach the 35.7 million total.

CNNE medical contributor Doctor Elmer Huerta, a public health and Latin American health policy expert, says this multi-pronged strategy has been very successful. "Chile didn't hesitate to make contracts with Sinovac, Pfizer or AstraZeneca. The key was that very early on Chile realized it was necessary to close multiple deals with vaccine makers. In Latin America, Chile is one of the best-positioned countries to do business and that has given it an advantage," Huerta said. 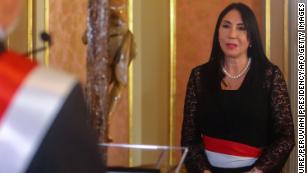 And then, Chilean authorities have been busy, turning any public space they can into a vaccination center. CNN recently visited a courtyard at the campus of the Pontifical Cahtolic University of Chile in Santiago. A space where you would normally see college students mingling had been converted into a highly organized and efficient clinic, one of many Covid-19 vaccination centers around the country.

Gabriela Valderrama, a Santiago resident who got her shot at the college campus, described the process as "fantastic" and "very well organized. I think it's phenomenal that they have different days for different age groups," she said.

In addition to schools and government buildings, health authorities have opened up vaccination sites around the country in places like shopping malls and football (soccer) stadiums.

"One thing is purchasing a vaccine and having it available and a totally different thing is injecting it into people's arms. That's what logistics is all about. Chile has had great distribution and vaccination. It has opened vaccination center in strategic places that are close and convenient to people, as opposed to the United States where we started vaccinating people at hospitals and large sites where people quickly got crowded," Dr. Huerta said.

Edgardo Cruz, a 71-year-old Santiago resident who got his first shot the Pontifical Catholic University of Chile site, says he's proud of the effort made so far.

"We are an international role model now. I think it buying vaccines and investing [in purchases] since May was an effort that paid off," Cruz said.

A unified message about social distancing from the government, from top to bottom, and mask use hasn't hurt either.

President Sebastián Piñera himself, who's 71 years old, and was therefore eligible to get the shot last week, took advantage of the opportunity to make a point... wearing a mask, of course.

"I would like to let my fellow citizens know that this vaccine is safe, it's effective and that we have made an enormous effort to inoculate all Chileans, all citizens of our country," he said after receiving the first shot of the Chinese-made Sinovac vaccine that will be followed by a second one on March 15.

"Chile also left politics aside. The country's politicians realized that Covid-19 was the enemy and dialed down tensions between political parties, working together towards the unified goal of controlling the pandemic," Huerta said.

And while other countries have struggled to decide who should get the vaccine after frontline workers, Chilean authorities came up with a vaccination schedule that is being followed to the letter.

After healthcare workers, the focus was the elderly. teachers, pharmacists and police officers became eligible Monday.

At less than 19 million, Chile's relatively small population size is also an advantage. It means each vaccine goes further toward the goal of national herd immunity, especially when compared with larger populations like those of Brazil, China or the European Union.

The Health Ministry's goal is vaccinating five-million people by the end of March and four out five Chileans before the first half of 2021 is over.