Kaci Hickox said she was made to feel like a criminal after returning from Sierra Leone last Friday.Her lawyer says the case has raised "serious constitutional and civil liberties issues".The White House and mayor of New York have expressed concerns over new strict quarantine orders in several US states.

The new rules in New York, New Jersey and Illinois require a mandatory 21-day quarantine period for all health workers who have had contact with Ebola patients in West Africa and just returned to the US.On Sunday New York Governor Andrew Cuomo announced an easing of the quarantine restrictions in his state.Under the latest guidelines, returning health workers who have displayed no symptoms can return to their homes for the quarantine period, where they will be monitored twice daily. Compensation will be offered for loss of earnings.Governor Cuomo was later quoted by Reuters as saying that the state wanted to encourage health workers to go to the Ebola outbreak zone.

The US ambassador to the UN, Samantha Power, said that all returning US health workers should be "treated like conquering heroes and not stigmatized for the tremendous work that they have done".She was speaking on the first leg of her tour of the three countries worst hit by the Ebola outbreak: Guinea, Liberia and Sierra Leone.More than 10,000 people have contracted the Ebola virus, with 4,922 deaths, according to the World Health Organization's latest figures.All but 27 of the cases have occurred inside Sierra Leone, Liberia and Guinea.

Out of media player. Press enter to return or tab to continue.

BBC's Anne Soy: "The world is dealing with two epidemics - the bigger one is that of fear"

Ms Hickox, of medical charity Doctors Without Borders, described the experience of being put into quarantine at Newark airport in New Jersey as "frightening" and a "frenzy of disorganisation".Her lawyer, Norman Siegel, said her isolation raised civil liberty issues given that she has displayed no Ebola symptoms and did not test positive for the virus."We're not going to dispute that the government has, under certain circumstances, the right to issue a quarantine," he said, adding that "the policy is overly broad when applied to her".But New Jersey Governor Chris Christie defended the quarantine measures on Sunday, saying it would "become a national policy sooner rather than later".

New York Mayor Bill de Blasio has described Ms Hickox as a "returning hero", but said that she had been "treated with disrespect" when put into quarantine."We owe her better than that and all the people better than that," he told reporters outside New York's Bellevue Hospital, where an American doctor, Craig Spencer, is being treated for the virus.The stricter measures were put in place after Dr Spencer tested positive for Ebola on his return from Guinea last week and unwittingly moved around the city before the symptoms developed. 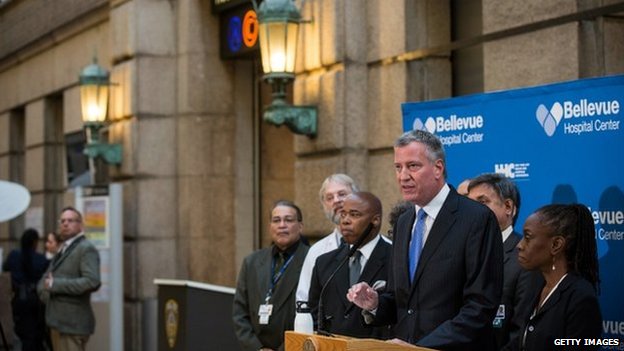 New York Mayor Bill de Blasio said the treatment of Ms Hickox was inappropriate.The White House has warned that such restrictions could put off aid workers and others travelling to West Africa to help mitigate the crisis at its source.Meanwhile, the US ambassador to the UN criticised the level of international support for nations hit by Ebola.Some nations who had offered backing "haven't taken responsibility yet" in supplying aid and doctors, Samantha Power said shortly before arriving in Guinea.Ms Power last week said the international community "isn't just losing the race to Ebola. We are getting lapped", and even praised Cuba - under a US embargo for decades - for its supply of doctors to Sierra Leone.The US has pledged 4,000 troops to build hospitals and to train health workers in West Africa, some 600 of whom have already arrived.

Out of media player. Press enter to return or tab to continue.