Japan's Emperor Naruhito is set to officially proclaim his enthronement, in a ritual-bound, centuries-old ceremony attended by more than a hundred dignitaries from around the world.

The head of state began his reign in May, after his father, Akihito, became the first emperor to abdicate in 200 years. On Tuesday, Naruhito, 59, will announce his change in status to the world, in an elaborate series of rituals known as "Sokui no Rei" at the Imperial Palace in Tokyo. 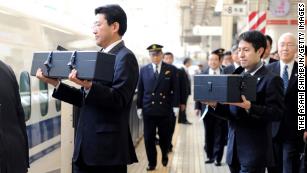 The high-profile occasion comes as Japan reels from Typhoon Hagibis -- one of the strongest storms to hit the country in years. The typhoon left dozens dead and caused extensive damage after it smashed into the country earlier this month.

The devastation prompted the palace to postpone a 4.6-kilometer (2.9-mile) public parade from the Imperial Palace to Akasaka Palace until November.

On Tuesday morning, Naruhito donned a white robe to pray at Shinto shrines in the Imperial palace.

Later, he is expected to change into a traditional orange robe and proclaim his ascension from an elaborate, gilded throne -- just as his father did during his enthronement in 1990. He'll also receive felicitations from local -- and international -- representatives. 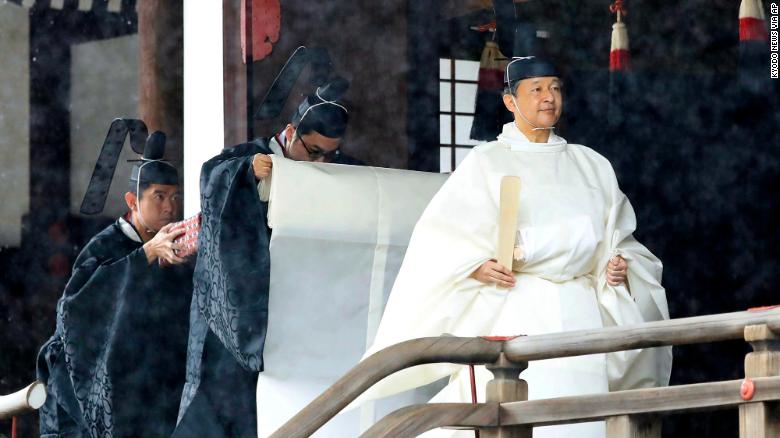 Japan's Emperor Naruhito, in a white robe, leaves after praying at "Kashikodokoro", one of three shrines at the Imperial Palace, in Tokyo, on October 22, 2019.

As he ascends the throne, boxes will be placed next to him that are believed to contain a sword and ancient jewel that, according to legend, date back to the mythical forefather of Japan's first emperor, Jimmu, who ruled almost 2,700 years ago. Along with a fabled octagonal mirror (which is expected to play no part Tuesday's ceremony), they form Japan's royal regalia, or the Three Sacred Treasures. The sword and the jewel are so sacred that they've never been seen in public.

Following that ceremony, Prime Minister Shinzo Abe is expected to give a speech. 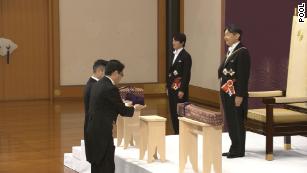 The enthronement ceremony will be followed by an imperial banquet on Tuesday night.

Naruhito is the 126th emperor in Japan, which claims to have the oldest continuous monarchy in the world stretching back 14 centuries.

On Friday, the government announced that about 550,000 petty criminals will be pardoned to mark the emperor's enthronement.

Naruhito -- whose name means "a man who will acquire heavenly virtues" -- took the throne after his father, Emperor Emeritus Akihito, abdicated the Chrysanthemum Throne in May. 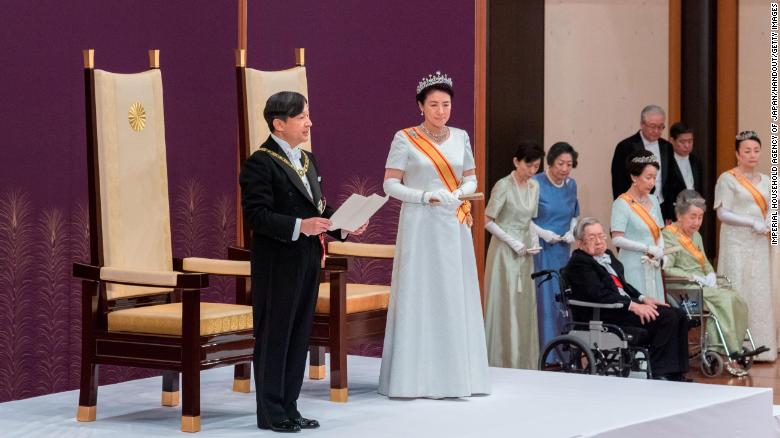 In this handout image provided by Imperial Household Agency, New Japanese Emperor Naruhito delivers his first speech after ascending the throne during the enthronement ceremony at the Imperial Palace on May 1, 2019 in Tokyo, Japan.

In addition to being the first in centuries to abdicate, Akihito was the first Japanese Emperor to marry a non-royal speak to his subjects live on television and to be hands-on in raising his children.

Naruhito -- who became the first Japanese royal to study abroad -- has pledged to continue his father's legacy and work to break down the barriers between the emperor and his subjects.

Naruhito, who is married to Harvard-educated Empress Masako, 55, is described by those who know him as "modest, charming and astute," said Jeffrey Kingston, director of Asian Studies at Temple University in Japan.