President Donald Trump's refusal to set an example by wearing a face covering, despite growing evidence that it may be one of the most effective ways to slow America's increasingly disastrous coronavirus pandemic, was always a political statement.

Now, as the clinical and electoral damage builds from a resurgent virus that is close to racing out of control after another record day for new cases on Wednesday, the President may be edging, very slowly, toward a rethink.

By going barefaced when everyone around him masked up, Trump created a false impression that the worst was behind us, that normality was about to come roaring back. He cemented his bond with grassroots supporters who see mask-wearing mandates as a sign of servitude to government and elites and an impediment to their rights.

Yet Trump's position has left him increasingly isolated even from the Republican leaders who have facilitated his unchained presidency, as public health officials and local and state leaders of all political stripes plead with Americans to cover up in public so the country can heal itself. 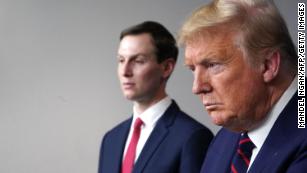 The mask movement now seems unstoppable, partly due to warnings like the one this week by the government's top infectious disease specialist, Dr. Anthony Fauci, who said new US coronavirus infections could soon hit 100,000 a day.

Fauci said the aggressive state openings that Trump championed have backfired as people without masks celebrated in bars and crowds.

"It's a violation of the principles of what we're trying to do, and that is the social distancing, the wearing of masks," Fauci told NPR on Wednesday.

The reality suggested by such warnings has helped to change the debate on mask wearing.

Far from becoming a mark of strength and defiance, Trump's isolated crusade against masks-- he dubbed himself a "LONE WARRIOR" in a recent tweet, is now emblematic of his denial of a fast-worsening national disaster, a botched federal government response and his refusal to take even the most basic steps to save American lives.

On Wednesday, Trump offered the first signs that he understands the box he has built for himself on masks, which medical experts say can contain droplets that could infect people and surfaces and facilitate the spread of the coronavirus.

The President claimed in an interview with Fox Business that he was "all for masks" and that he had worn them in situations where social distancing was not possible in small groups.

But for the last two months, Trump has trashed mask wearing, undermining his own government's advice. He suggested to the Wall Street Journal that people wore masks to show they disapprove of him. He warned he won't give the press the "pleasure" of seeing his face covered in public. He's toured the country barefaced and flouted social distancing recommendations. And he even said he couldn't wear a mask when he's meeting "presidents, prime ministers, dictators, kings, queens."

"I don't know, somehow, I don't see it for myself," the President said back in April.

Wednesday's tiny movement from his entrenched position may be all that he can manage for now -- especially as his opponent in November, Democrat Joe Biden, has said he would mandate mask wearing nationally if he is elected.

But the issue is not whether Trump has worn a mask in private. The sight of the President leading the way with a face mask would be a potent signal to his millions of devoted supporters -- especially those in conservative Southern states where mask wearing is frowned upon and the virus is getting worse, fast.

So far, Trump, who has often balked at taking risks with his base support -- a choice that all presidents face sooner or later -- has not taken the plunge. That it has taken him so long means that if he does eventually walk out of Air Force One in a mask he will cause an uproar and he will be likely denied any political benefit such a step could have won him earlier.

It is not at all surprising that the President has become a standout on the question of wearing a mask. The more his political position has weakened ahead of the election, the more he has adopted stances -- on issues like the virus, race and foreign policy -- that appear to appeal to his most devoted supporters.

Trump's mask apostasy is an act of rebellion against the establishment figures and scientists and professional officials of the government with which he has been waging an internal war ever since he took his office. It's a natural fit for a lifelong outsider who is personally and politically compelled to break the rules.

The President's slight softening of position Wednesday on wearing a mask came after many of his political allies implicitly repudiated his stance, stressing repeatedly that wearing a mask was not a political act but a gesture of humanity.

"We must have no stigma, none, about wearing masks," Senate Majority Leader Mitch McConnell, a Kentucky Republican, said on Tuesday. In hard-hit Texas over the weekend, Vice President Mike Pence -- who has himself spent weeks undermining government messaging on the issue and is loath to get crossways with his boss -- backed wearing a mask. Pence is still, however, not going all in -- typically saying that mask wearing should be done where it is "indicated" by local authorities. 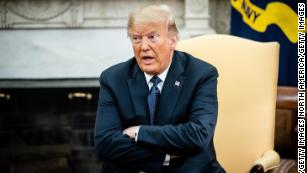 Even the President's campaign manager, Brad Parscale, modeled a Trump-Pence mask at a rally in Tulsa, Oklahoma, last month, suggesting as much as anything else a massive marketing opportunity the brander-in-chief may be missing.

Some Republicans have been trying to walk back earlier squeamishness about a step that runs counter to conservative talk show dogma by finding ways to make mask wearing more politically palatable. House Minority Leader Kevin McCarthy, a California Republican who's a strong Trump ally, suggested that with Independence Day approaching, Americans should show their patriotism with red, white and blue face coverings. Sen. Lamar Alexander, a Tennessee Republican, has been resplendent in a plaid mask that recalls the red and black shirt he wore when he hiked across his state and was elected governor decades ago.

Trump's apparent shift on mask wearing probably does not signal a corresponding change in his denial about the worsening crisis and refusal to provide strong presidential leadership.

In the same Fox Business interview, he claimed that "we did it all right" on coronavirus, a pandemic that he initially ignored, then mismanaged and politicized, and finally went back to ignoring even with more than 127,000 Americans now dead.

"We did a great job. We're credited with doing a great job," he said, before returning his typical fantasy-based predictions about the virus.

"We're headed back in a very strong fashion. ... And I think we're going to be very good with the coronavirus. I think that at some point that's going to sort of just disappear. I hope," Trump said. 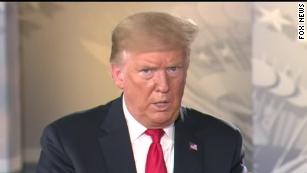 The white-collar revolt against Trump is peaking

If the President has not had an epiphany about the worsening situation, which has seen nearly half the states slow or pause their reopening plans, what could be motivating him?

If record new infection rates, filling hospitals and an average of 1,000 American deaths a day can't get him to take the pandemic seriously, there's one thing that still might: its disastrous impact on his reelection hopes.

A divide is emerging inside Trump's inner circle over whether the President should publicly turn his attention to the virus he has been ignoring for days or continue to open the economy, sources familiar with the matter told CNN's Jim Acosta, Jeremy Diamond and Kevin Liptak.

Several of Trump's top aides, including chief of staff Mark Meadows and son-in-law Jared Kushner, have begun to worry about the President's reelection chances and have urged a focus on the economy. But other advisers believe he has suffered severe damage amid the pandemic.

"There is a fair amount of concern," one adviser said, describing the President as "frustrated" by recent polling indicating Biden could win the November election by a wide margin.