The US Supreme Court is on the verge of a historic transformation that could wind back the law in America for decades, in some cases to the 1930s, pre-New Deal approach.

With President Donald Trump's nomination of Judge Amy Coney Barrett, the nine-member bench would lock in a 6-3, conservative-liberal majority, ending an era of 5-4 conservatism.

This is not a simple matter of just one vote.

For decades, a quartet of liberal justices has sometimes been able to secure -- often through tense negotiations -- a crucial fifth vote from the conservative wing. That has meant even though America's highest bench was shifting rightward, it preserved abortion rights and narrowly declared a right to same-sex marriage.

A tenuous moderation also prevented the five-justice conservative bloc from routinely reversing acts of Congress and eviscerating regulation, for example, over the environment, labor and public safety. Such regulatory authority dates to Franklin D. Roosevelt's New Deal era, and much has been the bane of the Trump administration, its top officials and its judicial appointees.​

The new 6-3 lopsidedness will make consensus at the middle difficult and certainly challenge the leadership of Chief Justice John Roberts, who has sought to project an ideological steadiness and non-political taint.

"It does seem to me that we're entering a whole new judicial era," said Katharine Bartlett, former dean of Duke Law School. She predicted that the women's rights decisions so identified with the late Justice Ruth Bader Ginsburg will endure, as will the constitutionality of same-sex marriage, now engrained in American life.

"But in the areas of voting rights and race, and gun regulation," Bartlett said, "I expect retrenchment."

Ginsburg, who died on September 18, embraced an approach to the law that is the opposite of Barrett, who would succeed her. As Ginsburg found generous reproductive rights under the Constitution, Barrett has suggested opposition to abortion rights (Trump has pledged to try to win reversal of the 1973 Roe v. Wade decision that made abortion legal nationwide). Ginsburg dissented when the court ruled the Second Amendment covered individual gun ownership, while Barrett has an expansive vision of Second Amendment rights. Ginsburg voted against broad exemptions to the Affordable Care Act's contraceptive mandate based on religious grounds, just as Barrett, before becoming a judge, expressed the opposite sentiment.

Religious conservatives have been promoting the appointment of Barrett because of her positions on faith and the law. 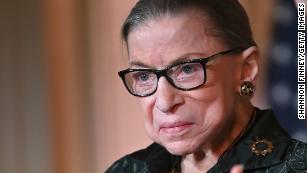 Law professors who have long studied the Supreme Court note that today's conservative justices have obliged religious interests more than conservatives of a prior era. In recent cases, the Roberts court has allowed greater public funding of religious education and sided with employers who have religious objections to the Affordable Care Act's mandate for birth control coverage.

"Religion is an agenda item for the Roberts Court," said University of Chicago law professor David Strauss, "in a way that it certainly wasn't for the Burger Court (1969-1986) and even the Rehnquist Court (1986-2005)."

The right-wing revolution has been more than a half century in the making, yet it has been amplified under Trump. He is getting a rare third opportunity in a single term to add a justice to the bench.

That he is replacing liberal Ginsburg is particularly incongruous. They were publicly critical of each other. In 2016, when she described him as a "faker," he responded, "her mind is shot." Before her September death, she dictated a statement to her granddaughter, a lawyer, saying she wanted the next president to replace her.

In some respects, the current chapter of Supreme Court history began when Chief Justice Earl Warren, the bulwark of individual rights and liberties, retired in 1969. Republican President Richard Nixon replaced him with Warren Burger, a jurist known for his law-and-order conservatism.

Nixon then named three other justices, including William Rehnquist, who was then elevated to chief justice in 1986 by Ronald Reagan. Nixon had campaigned against Warren era rulings, such as Miranda v. Arizona, which enshrined the familiar police "Miranda rights," but it was Reagan who more systematically and effectively set out to remake the judiciary in his image. Reagan had three appointments, in addition to Rehnquist's elevation.

As Trump is proving, Republican presidents have enjoyed good timing for vacancies on their watch. Democratic President Jimmy Carter did not have an opportunity for a single high court appointment during his 1977-1981 tenure.

Of the 18 justices confirmed since 1969, 14 have come from Republican presidents, and only four from Democrats. A few GOP appointees, notably Harry Blackmun and David Souter, in time voted consistently with the liberal wing. But conservatives have dominated. (Senate Republicans in 2016 prevented a vote on Democrat Barack Obama's nomination of Merrick Garland.) 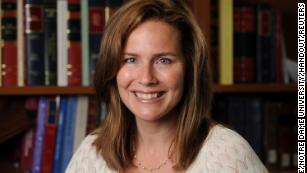 Today's conservatives, however, do not entirely resemble those of prior decades, notably in their attitudes toward government authority.

Trump and his close advisers have been candid about seeking judicial nominees who will restrain regulators. They believe government has grown too big and encroaches on business and individual activities.

With the appointment of Barrett, the Supreme Court appears certain to have a majority, for example, to reverse a nearly century-old doctrine that allows Congress to delegate some of its power to agency discretion.

Even before this moment, the court was curtailing agency authority to protect workers and consumers. In a little-noticed 2018 case, Ginsburg warned that the New Deal was under attack. The dispute involved an exemption from overtime pay rules in the Fair Labor Standards Act.

As the then five-justice conservative bloc enhanced the exemptions, Ginsburg wrote in a dissenting opinion that the majority was stripping away "protection for the most vulnerable workers."

Noting that the Fair Labor Standards Act was passed in 1938, Ginsburg declared that the majority had undermined worker protections from the New Deal era, "without even acknowledging that it unsettles more than half a century of our precedent."

How far the court will lurch to the right could depend on the vote and leadership of Roberts. Until Ginsburg's death, he filled the role of swing-vote conservative. In prior decades, that role had been assumed by Lewis Powell (1972-1987), Sandra Day O'Connor (1981-2006) and Anthony Kennedy (1988-2018).

These generally conservative justices moved to the left in enough cases to ensure a moderate middle, for example, on abortion rights and limited university affirmative action. Since Kennedy's retirement two years ago and the addition of Justice Brett Kavanaugh, Roberts has been the swing vote on the conservative-leaning court.

Based on the records of the current conservatives and Barrett, the ideological center could now be Kavanaugh.

But the ability of Roberts to retain control and keep the court from moving too fast should not be underestimated.

In countless public comments in recent years, he has emphasized the impartiality of the bench. He has often set aside his own conservative instincts to ensure decisions that shielded the integrity of the Supreme Court. 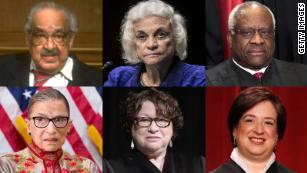 Of the 114 Supreme Court justices in US history, all but 6 have been White men

Further, the former appellate litigator is skilled at persuasion. He also has, by virtue of the chief justiceship, the power to assign the court opinion when he is in the majority.

One way or another, Roberts is likely to ensure that he remains largely in the majority, even if it is a solidly conservative majority.

"The Rehnquist Court became the Kennedy Court," observed Professor Strauss. "Roberts does not want this to become the Kavanaugh Court."