Thailand's Prime Minister announced he is prepared to lift emergency measures imposed on Bangkok following more than a week of daily anti-government protests in the nation's capital and other cities.

In a pre-recorded speech that was televised on Wednesday, Prime Minister Prayut Chan-o-cha said he is taking the first steps to "de-escalate" political tensions that have seen tens of thousands of protesters take to the streets in recent months, calling for a new constitution, monarchy reform and Prayut's resignation.

"The protestors have made their voices and views heard," Prayut said. "As the leader of the nation who is responsible for the welfare of all Thais -- whether they be protestors or the silent majority with whatever political convictions -- I will make the first move to de-escalate this situation."

Prayut said he is planning to lift the state of severe emergency in the capital on the condition that "there are no violent incidents" and asked protesters to work through representatives in parliament.

"I ask the protesters to reciprocate with sincerity, to turn down the volume on hateful and divisive talk, and to let us, together, disperse this terrible dark cloud before it moves over our country," the Prime Minster added.

Meanwhile, an extraordinary parliamentary session was given royal assent and will be convened from Monday, according to an announcement from Thailand's Royal Gazette. Thailand's parliament is in recess but will be recalled to debate the crisis. The order said King Maha Vajiralongkorn approved the session "With necessity for the national interest." 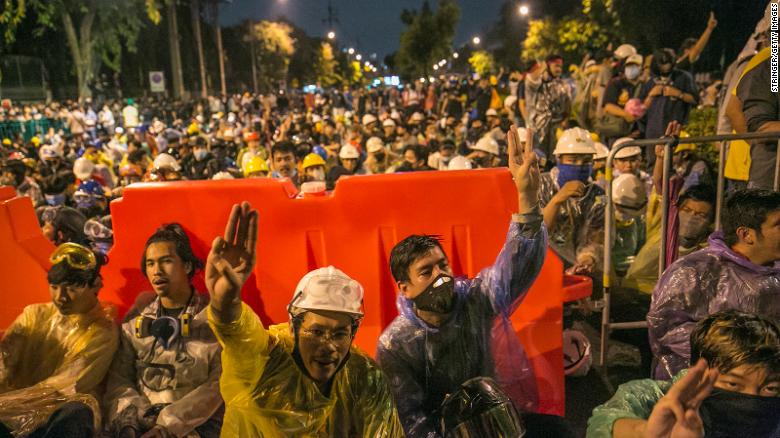 Pro-democracy protesters attend a rally on October 21, 2020 in Bangkok, Thailand.

Student-led demonstrators have continued defying an emergency decree imposed last Thursday that banned public gatherings of more than five people, restricted the publication of information deemed to incite fear among the public, and granted broader powers to security forces.

Tens of thousands of pro-democracy protesters rallied in Bangkok and other cities over the weekend, galvanized by clashes between police and protesters on Friday. Many people, including celebrities, have publicly condemned the police's use of water cannons to disperse protesters.

"Last Friday night, we saw things that should never be in Thailand," Prayut said in Wednesday's speech, referring to some of the violent clashes between protesters and police. But he acknowledged the peaceful "well-meaning" demonstrators as well.

Started by students, the protest movement has been mostly peaceful and has attracted support from a wider cross-section of society. Marches and flash-mob style rallies are organized online over messaging platforms such as Telegram, with protest locations announced last minute on social media.

On Wednesday, protesters said they were giving Prayut three days to resign or face more demonstrations.

"Prayut must resign within three days, or else will face with people again," a local protest leader said.

They said they would suspend their activities for three days to give the government time to respond. Prayut has previously said that he will not step down. 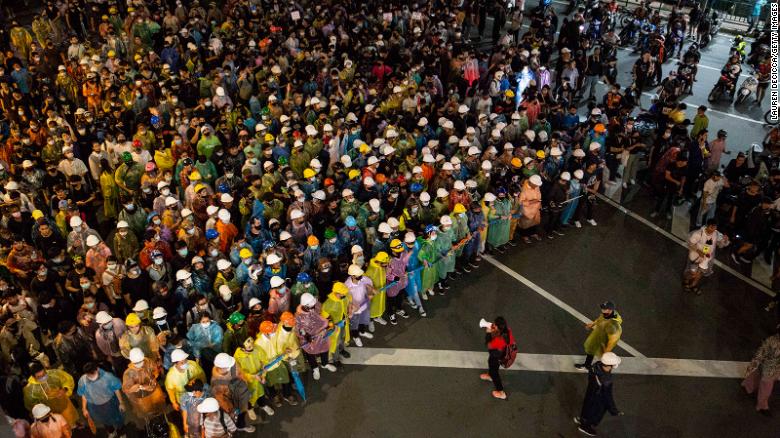 Thousands of pro-democracy protesters march to Government House on October 21, 2020 in Bangkok.

The group are also demanding the release of arrested protesters in custody, including several protest leaders. Thai police said that 77 people have been arrested from the protests in Bangkok since October 13. Thai Lawyers for Human rights put the number of people arrested nationwide at 87, with 81 prosecuted.

Charges have ranged from smaller offenses to more serious crimes such as sedition, which carries a maximum seven years in prison, and violating the Computer Crime Act.

Last week, two activists were arrested on charges of attempting violence against the Queen, after her motorcade was obstructed by anti-government crowds. The pair face a possible life sentence.

The threat of prison, the arrest of protest leaders and the emergency decree has not deterred protesters. A central demand is reforming Thailand's powerful monarchy to curb the King's powers and make him answerable to the constitution.

Protesters have scrutinized King Vajiralongkorn's immense wealth and power. Vajiralongkorn has consolidated his power by expanding his own appointed military unit, the King's Guard. He has also vastly increased his personal wealth and transferred billions of dollars worth of royal assets held by the Thai Crown directly into his control.

Another core demand of the protesters is for the military-drafted constitution to be rewritten as they say it allows the military to hold onto political power. True democracy cannot happen in Thailand, the protesters say, until the top-down ruling establishment made up of the monarchy, military and wealthy political elites is reformed.