"We don't contemplate any charges whatsoever in this crash," Villanueva said in a Facebook Live chat. "This remains an accident. An accident is not a crime. They do happen, unfortunately."

As of overnight Wednesday, Woods was "awake, responsive, and recovering" in the hospital from major surgery, according to a statement on his Twitter account.

The 45-year-old golf legend was driving shortly after 7 a.m. PT Tuesday in Rancho Palos Verdes when his SUV crossed a median and veered across two lanes of road before hitting a curb, hitting a tree and landing on its side in the brush, Villanueva said Tuesday.

Woods remained conscious and calm but sustained serious leg injuries. Villanueva told CNN's Erin Burnett on Wednesday that Woods made no comments at the scene regarding the cause of the crash, and when investigators asked him about it at the hospital, "he had no recollection of the crash itself."

Woods underwent a lengthy emergency surgery on his lower right leg and ankle at the Harbor-UCLA Medical Center, the statement said. The leg fractures were "comminuted," meaning the bone was broken into more than two parts, and "open," meaning the broken bone was exposed to open air, creating risk of an infection, Chief Medical Officer Dr. Anish Mahajan said in the statement.

Orthopedic trauma specialists inserted a rod into his tibia to stabilize both the tibia and fibula bones, stabilized the foot and ankle bones with a combination of screws and pins, and relieved pressure to the muscle and soft tissue of his leg by surgically releasing the covering of the muscle, Mahajan said. 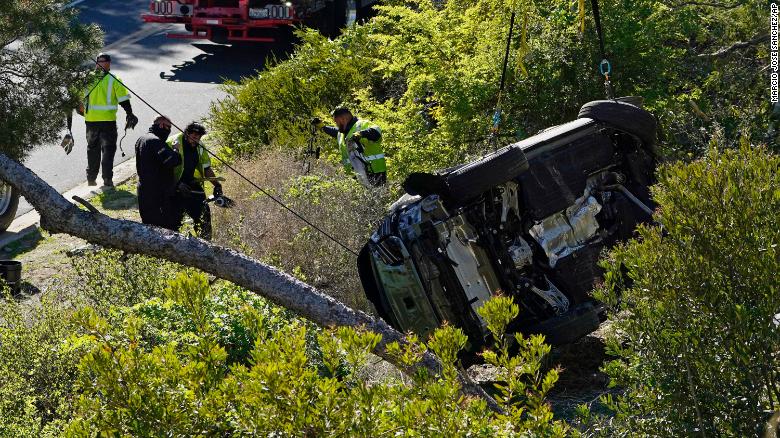 A vehicle rests on its side after a rollover accident involving golfer Tiger Woods Tuesday.

The decision to surgically release the covering of the muscle suggests Woods may have been at risk of "compartment syndrome," an issue common after crush injuries when pressure builds up to such a dangerous level that it can cut off blood flow.

"These surgeons likely believed that if they did not perform one of those procedures to release that pressure, they actually were worried that he could lose the limb. Amputation might have been necessary," Dr. Jeremy Faust, emergency physician Brigham and Women's Hospital in Boston, told CNN on Wednesday.

Having seen the damage at the crash site, Villanueva said it was "nothing short of a miracle" that Woods was alive. Woods was wearing a seat belt, which may have saved his life.

"We have seen accidents with far less obvious (damage) that are fatalities," Villanueva told CNN's Chris Cuomo on Tuesday.

The crash represents a devastating setback to Woods' hopes of returning to golf glory and comes just a month after his fifth career back surgery. And in a life highlighted by his mastery of the golf course, it's the roadways that have proved most destructive: the 2009 car crash that led to the dissolution of his personal life and the 2017 DUI arrest that stemmed from an addiction to painkillers.

The crash and rescue

Woods, the 15-time major champion, was driving a Genesis SUV courtesy vehicle by himself and is believed to have been traveling at a high rate of speed before the crash, authorities said. There were no skid marks or other indications of braking, Villanueva added.

Villanueva said that section of road is "downhill on a curve," and he and Gonzalez said the area is known as a trouble spot for speeding and accidents. The road has seen 13 accidents since last January.

Los Angeles County Sheriff's Deputy Carlos Gonzalez, who responded to the crash, found a lucid Woods still strapped into his seat belt but trapped as the SUV had rolled over onto the driver's side door. 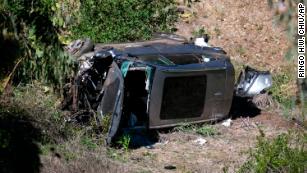 Here's what we know about Tiger Woods' car accident and injuries

Gonzalez described Woods as calm but potentially in shock. He determined there was no evidence of impairment, so drug recognition experts did not respond to the scene or hospital.

"I do think the fact that he was wearing a seat belt and that the vehicle safety features worked as designed by the manufacturer likely resulted in either reducing his injury or saving his life," Gonzalez told Cuomo.

Investigators have not yet pulled any data from the vehicle's black box event recorder, but anticipate doing so quickly to determine the cause of the crash.

"We do not know his estimated speed at this time," Villanueva said Wednesday. He said there is no information to believe Woods may have been distracted or on his phone.

Los Angeles County Fire officials arrived to break him free. Woods tried to get out of the SUV himself but was unable, Chief Daryl Osby told CNN's John Berman. He could not stand on his own, Gonzalez said.

To free him, firefighters broke the windshield with an ax and used a pry bar to move the seats and metal from around Woods' legs, Osby said.

The rescue workers put Woods in a neck collar, attached leg splints and used a backboard to get him through the giant hole in the windshield to an ambulance. He went to the hospital in serious but stable condition with injuries to both legs, Osby said.

Another car, not involved in the initial rollover incident, stopped after the crash and was rear-ended, said Los Angeles County public information officer Henry Narvaez.

In the days leading up to the crash, Woods hosted the Genesis Invitational PGA tour event and gave golf lessons to sports stars and celebrities for a TV special. He did not play in the event because of a recent back surgery. 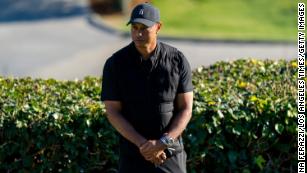 In the days leading up to his crash, Tiger Woods had been teaching golf to movie and sports stars

"He was filming his latest series with us yesterday, which will see him giving on-course instruction to a number of celebrities including Jada Pinkett Smith, Dwyane Wade and David Spade. He was due to continue filming with us today," Golf Digest's statement said.

Woods had a 7:30 a.m. call time, with shooting supposed to begin around 8. It was the second day of filming, Rapaport said.

Woods was giving on-course golf lessons to celebrities but was not playing or hitting, Rapaport told CNN's Wolf Blitzer on Tuesday.

"He was in good spirits on Monday when he did that," Rapaport said of the shoot.

The ups and downs of Tiger's career

The severe injuries are just the latest setback for Woods in a career of several dramatic rises and falls.

Famous from an early age, Woods turned professional in 1996 at just 21 years old, and his talent and charisma transformed him into a global icon. He won a remarkable 14 golf majors from 1997 through 2008 and looked set to stroll past the all-time record of 18 set by Jack Nicklaus.

Woods' meteoric rise went beyond the golfing world as well. Woods broke barriers as a biracial athlete of Black and Asian descent in a sport populated by mainly White athletes.

"There were some people who were able to look at Tiger Woods and understand Black excellence in this arena in a way they hadn't understood it before," said Jemele Hill, contributing writer for The Atlantic.

But a series of injuries and personal issues derailed the track of his career. In 2009, a car crash outside his Florida home led to tawdry revelations about his rampant infidelity and the collapse of his marriage.

After a break from the sport, he returned to golf but without the smothering dominance of his earlier years. There was also a growing list of injuries, leading to four back operations, including spinal fusion surgery, as well as the "dark times" where the pain was so bad he couldn't even get out of bed or play with his kids. 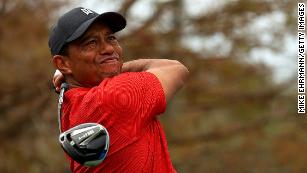 Tiger Woods completed one of sport's greatest comebacks. Can he do it again?

The operations and pain led to an addiction to opioid painkillers, and he was arrested on a DUI charge in 2017 in Florida. He pleaded guilty to reckless driving as part of a program to keep him from serving prison time.

That low point made his return to the top of the sport in 2019 all the more stunning. At the Masters, he surged to the lead and, followed by roaring crowds, clinched his first major win since the US Open in 2008 in one of the great comebacks in sports history.

The return to form, though, was again interrupted by injury. He announced in January that he had undergone a fifth back surgery after experiencing "discomfort," and earlier this week he said he hoped to compete at this year's Masters -- but his crash on Tuesday resets any timetable.

Dr. Scott Boden, professor of orthopedic surgery at Emory University School of Medicine, said there were too many unknown factors, particularly around the extent of his soft tissue injuries and those to his foot and ankle, to say what his recovery might look like.

"For an elite athlete like Tiger, he's got as good a chance from coming back from this as anybody does," Boden said. "We know never to count Tiger out from a recovery."

For now, the focus is on his immediate health, PGA Tour commissioner Jay Monahan said in an emotional interview Wednesday.

"Tiger's a human being. Tiger's had some really difficult injuries. The most important thing is his well being. It's Tiger recovering, it's supporting Tiger's family," Monahan said. "The golf -- when Tiger wants to talk about the golf, we'll talk about the golf. All the energy right now is going to be poured into supporting him in the days and months ahead."