The top US military officer, Chairman of the Joint Chiefs Gen. Mark Milley, was so shaken that then-President Donald Trump and his allies might attempt a coup or take other dangerous or illegal measures after the November election that Milley and other top officials informally planned for different ways to stop Trump, according to excerpts of an upcoming book obtained by CNN.

The book, from Pulitzer Prize-winning Washington Post reporters Carol Leonnig and Philip Rucker, describes how Milley and the other Joint Chiefs discussed a plan to resign, one-by-one, rather than carry out orders from Trump that they considered to be illegal, dangerous or ill-advised.

"It was a kind of Saturday Night Massacre in reverse," Leonnig and Rucker write.

The book, "I Alone Can Fix It," scheduled to be released next Tuesday, chronicles Trump's final year as president, with a behind-the-scenes look at how senior administration officials and Trump's inner circle navigated his increasingly unhinged behavior after losing the 2020 election. The authors interviewed Trump for more than two hours.

The book recounts how for the first time in modern US history the nation's top military officer, whose role is to advise the president, was preparing for a showdown with the commander in chief because he feared a coup attempt after Trump lost the November election.

The authors explain Milley's growing concerns that personnel moves that put Trump acolytes in positions of power at the Pentagon after the November 2020 election, including the firing of Defense Secretary Mark Esper and the resignation of Attorney General William Barr, were the sign of something sinister to come.

Milley spoke to friends, lawmakers and colleagues about the threat of a coup, and the Joint Chiefs chairman felt he had to be "on guard" for what might come.

In the days leading up to January 6, Leonnig and Rucker write, Milley was worried about Trump's call to action. "Milley told his staff that he believed Trump was stoking unrest, possibly in hopes of an excuse to invoke the Insurrection Act and call out the military."

Milley viewed Trump as "the classic authoritarian leader with nothing to lose," the authors write, and he saw parallels between Adolf Hitler's rhetoric as a victim and savior and Trump's false claims of election fraud.

"This is a Reichstag moment," Milley told aides, according to the book. "The gospel of the Führer."

Ahead of a November pro-Trump "Million MAGA March" to protest the election results, Milley told aides he feared it "could be the modern American equivalent of 'brownshirts in the streets,'" referring to the pro-Nazi militia that fueled Hitler's rise to power.

Rucker and Leonnig interviewed more than 140 sources for the book, though most were given anonymity to speak candidly to reconstruct events and dialogue. Milley is quoted extensively and comes off in a positive light as someone who tried to keep democracy alive because he believed it was on the brink of collapse after receiving a warning one week after the election from an old friend.

"What they are trying to do here is overturn the government," said the friend, who is not named, according to the authors. "This is all real, man. You are one of the few guys who are standing between us and some really bad stuff."

Milley's reputation took a major hit in June 2020, when he joined Trump during his controversial photo-op at St. John's Church, after federal forces violently dispersed a peaceful crowd of social justice protesters at Lafayette Square outside the White House. To make matters worse, Milley wore camouflage military fatigues throughout the incident. He later apologized, saying, "I should not have been there." 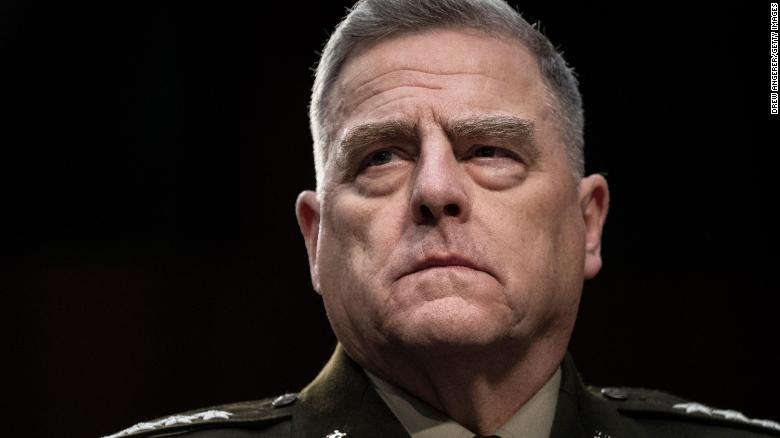 But behind the scenes, the book says Milley was on the frontlines of trying to protect the country, including an episode where he tried to stop Trump from firing FBI Director Chris Wray and CIA Director Gina Haspel.

Leonnig and Rucker recount a scene when Milley was with Trump and his top aides in a suite at the Army-Navy football game in December, and publicly confronted White House chief of staff Mark Meadows.

"What's going on? Are you guys getting rid of Wray or Gina?" Milley asked. "Come on chief. What the hell is going on here? What are you guys doing?"

"Don't worry about it," Meadows said. "Just some personnel moves."

"Just be careful," Milley responded, which Leonnig and Rucker write was said as a warning that he was watching.

'That doesn't make any sense'

The book also sheds new light on Trump's descent into a dark and isolated vacuum of conspiracy theories and self-serving delusions after he was declared the loser of the 2020 election.

After the January 6 insurrection, the book says Milley held a conference call each day with Meadows and then-Secretary of State Mike Pompeo. Leonnig and Rucker report the officials used the calls to compare notes and "collectively survey the horizon for trouble."

"The general theme of these calls was, come hell or high water, there will be a peaceful transfer of power on January twentieth," one senior official told the authors. "We've got an aircraft, our landing gear is stuck, we've got one engine, and we're out of fuel. We've got to land this bad boy." 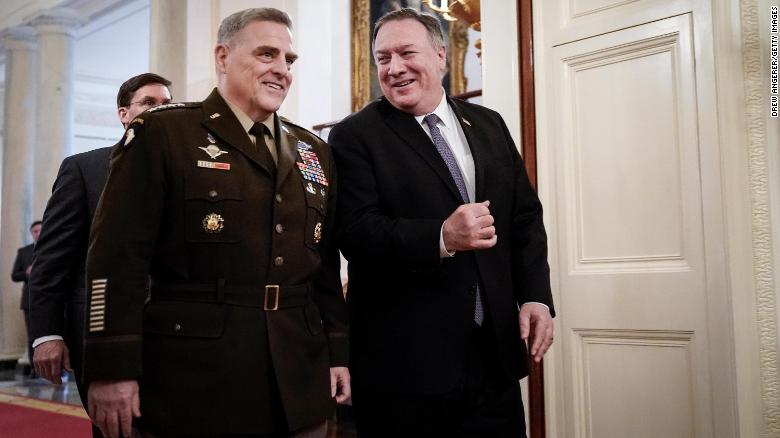 Chairman of the Joint Chiefs of Staff Gen. Mark Milley and US Secretary of State Mike Pompeo arrive for a Presidential Medal of Freedom ceremony for retired four-star Army general Jack Keane in the East Room of the White House March 10, 2020 in Washington, DC.

Milley told aides he saw the calls as an opportunity to keep tabs on Trump, the authors write.

Leonnig and Rucker also recount a scene where Pompeo visited Milley at home in the weeks before the election, and the two had a heart-to-heart conversation sitting at the general's table. Pompeo is quoted as saying, "You know the crazies are taking over," according to people familiar with the conversation.

The authors write that Pompeo, through a person close to him, denied making the comments attributed to him and said they were not reflective of his views.

In recent weeks Trump has attacked Milley, who is still the Joint Chiefs chairman in the Biden administration, after he testified to Congress about January 6.

The book details a phone call the day after the January 6 insurrection between Milley and Cheney, the Wyoming Republican who has close military ties. Cheney voted to impeach Trump and has been an outspoken critic of his election lies, leading to her ouster from House GOP leadership.

Milley asked Cheney how she was doing.

"That fucking guy Jim Jordan. That son of a b*tch," Cheney said, according to the book.

Cheney bluntly relayed to Milley what she experienced on the House floor on January 6 while pro-Trump rioters overran police and breached the Capitol building, including a run-in with Jordan, a staunch Trump ally in the House who feverishly tried to overturn the election.

Cheney described to Milley her exchange with Jordan: "While these maniacs are going through the place, I'm standing in the aisle and he said, 'We need to get the ladies away from the aisle. Let me help you.' I smacked his hand away and told him, 'Get away from me. You f**king did this.'"

The book reveals Pelosi's private conversations with Milley during this tenuous period. When Trump fired Esper in November, Pelosi was one of several lawmakers who called Milley. "We are all trusting you," she said. "Remember your oath."

After the January 6 insurrection, Pelosi told the general she was deeply concerned that a "crazy," "dangerous" and "maniac" Trump might use nuclear weapons during his final days in office.

"Ma'am, I guarantee you these processes are very good," Milley reassured her. "There's not going to be an accidental firing of nuclear weapons."

"How can you guarantee me?" Pelosi asked.

"Ma'am, there's a process," he said. "We will only follow legal orders. We'll only do things that are legal, ethical, and moral."

A week after the insurrection, Pelosi led House Democrats' second impeachment of Trump for inciting the insurrection. In an interview with the authors, Pelosi said she fears another president could try to pick up where Trump left off.

"We might get somebody of his ilk who's sane, and that would really be dangerous, because it could be somebody who's smart, who's strategic, and the rest," Pelosi said. "This is a slob. He doesn't believe in science. He doesn't believe in governance. He's a snake-oil salesman. And he's shrewd. Give him credit for his shrewdness."

"'I know the f**king krauts,' the president added, using a derogatory term for German soldiers from World War I and World War II," Leonnig and Rucker write. "Trump then pointed to a framed photograph of his father, Fred Trump, displayed on the table behind the Resolute Desk and said, 'I was raised by the biggest kraut of them all.'"

Trump, through a spokesman, denied to the authors making these comments.

'No one has a bigger smile'

After January 6, Milley participated in a drill with military and law enforcement leaders to prepare for the January 20 inauguration of President Joe Biden. Washington was on lockdown over fears that far-right groups like the Proud Boys might try to violently disrupt the transfer of power.

Milley told a group of senior leaders, "Here's the deal, guys: These guys are Nazis, they're boogaloo boys, they're Proud Boys. These are the same people we fought in World War II. We're going to put a ring of steel around this city and the Nazis aren't getting in."

Trump did not attend the inauguration, in a notable break with tradition, and the event went off without incident.

As the inauguration ceremony ended, Kamala Harris, who had just been sworn in as vice president, paused to thank Milley. "We all know what you and some others did," she said, according to the authors. "Thank you."

The book ends with Milley describing his relief that there had not been a coup, thinking to himself, "Thank God Almighty, we landed the ship safely."

Milley expressed his relief in the moments after Biden was sworn in, speaking to the Obamas sitting on the inauguration stage. Michelle Obama asked Milley how he was feeling.

"No one has a bigger smile today than I do," Milley said, according to Leonnig and Rucker. "You can't see it under my mask, but I do."