Small debris, 30 bodies, an oil slick, and then on Saturday, two big pieces of metal debris. Rescuers searching for doomed AirAsia Flight QZ8501 seem to be finding it piece by piece.Photos of the new debris are likely to follow soon, as Indonesia's rescue agency is sending down a remote-operated vehicle with a camera, Search and Rescue Agency chief Bambang Soelistyo said on Saturday.The first object measures 9.2 x 4.6 x 0.5 meters (30 x 15 x 1.6 feet), and the second measures 7.2 x 0.5 meters (24 x 1.6 feet). 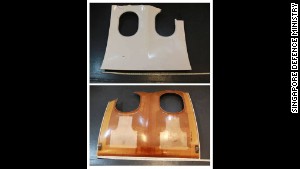 A piece of debris resembling a window panel has been found, Singapore's Defense Ministry said Friday.Also on Friday, a piece was found that appeared to belong to a plane's fuselage -- its main body, Singapore officials said.

Who was on the plane

The USS Sampson, deployed by the U.S. Navy to help, recover some bodies. Some of them will be autopsied to determine the cause of death to aid the investigation, an Indonesian official said on Saturday.Back on land, four of the plane's victims have been identified. The first, Hayati Lutfiah Hamid, was laid to rest on Thursday.AirAsia CEO Tony Fernandes said he was traveling to Surabaya, Indonesia, to bring home the body of flight attendant Khairunisa Haidar Fauzi."I cannot describe how I feel. There are no words," he said on Twitter.Family members of the 132 still missing waited in Surabaya for news.Finding the fuselage and black box of the Airbus A320-200 have priority for the 59 diving teams searching underneath the waves. Russia has sent 22 of them along with a search plane and a cargo jet.

They are concentrating on a 1,575 square nautical mile zone that officials believe is the "most probable area" to find the remains of the aircraft.Here's more key information about where things stand on Flight QZ8501. What we know: QZ8501 took off early Sunday from Surabaya, bound for Singapore. Roughly 35 minutes into the flight, the pilot asked air traffic control for permission to turn left and climb to avoid bad weather. Minutes later, the plane disappeared from air traffic control's radar.

What we don't know: What happened on board after contact with the plane was lost. No distress call was received.Some experts speculate that the aircraft might have experienced an aerodynamic stall because of a lack of speed or from flying at too sharp an angle to get enough lift. Other theories include a lack of information in the cockpit about the plane's position, or storm damage to the engines.

But the questions won't really be answered until the main wreckage and the flight recorders turn up.

How can a modern airliner vanish?

What we know: The "black boxes" are key. Actually, they're orange and should be located in the plane's tail. A lab in Jakarta will analyze them, if they are recovered. The batteries powering the "pingers" that send acoustic signals have only about 24 days of power left.What we don't know: What destroyed the plane. Investigators will need to use information gleaned from the flight recorders and clues from the wreckage to try to find out.

"The more bits I can put into my mosaic, the better my picture will be," aviation safety expert Michael Barr said. But the conditions at sea make that work much more difficult than on land due to currents and winds.

The ones who missed the flight

What we know: The 6-year-old Airbus, operated by AirAsia's Indonesian affiliate, had accumulated about 23,000 flight hours in about 13,600 flights. The plane's last scheduled maintenance was on November 16.Flight 8501's veteran captain, Iriyanto, 53, had 20,537 flying hours, 6,100 of them with AirAsia on the Airbus A320, the airline said. The first officer, Remi Emmanuel Plesel, 46, had 2,275 flying hours, a reasonable amount for his position.

What we don't know: Did technical problems or human error have anything to do with the crash. A major aviation database registers 54 incidents involving the A320.Some A320 accidents and incidents involve fan-cowl detachments, landing gear collapse, bird strikes and pilot error, an expert said. These only cause disasters in very rare cases.