All eight were picked out by Nasa's Kepler space telescope, taking its tally of such "exoplanets" past 1,000.But only three sit safely within the "habitable zone" of their host star - and one in particular is rocky, like Earth, as well as only slightly warmer.The find was revealed at a meeting of the American Astronomical Society.

The three potentially habitable planets join Kepler's "hall of fame", which now boasts eight fascinating planetary prospects.And researchers say the most Earth-like of the new arrivals, known as Kepler 438b, is probably even more similar to our home than Kepler 186f - which previously looked to be our most likely twin.At 12% larger than Earth, the new claimant is bigger than 186f but it is closer to our temperature, probably receiving just 40% more heat from its sun than we do from ours.So if we could stand on the surface of 438b it may well be warmer than here, according to Dr Doug Caldwell from the Seti (Search for Extra-Terrestrial Intelligence) Institute in California.

"And it's around a cooler [red dwarf] star... so your sky would look redder than ours does to us," Dr Caldwell said. 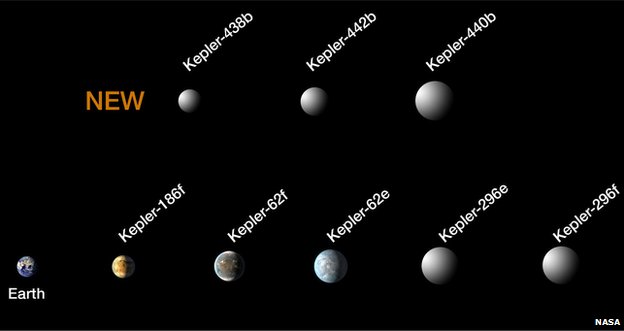 That first-person encounter, however, is unlikely - both because the planet is 475 light years away and because we still have essentially no idea what it's made of.Images from the Kepler telescope, which trails behind the Earth and peers far into the distance as we orbit our own sun, are used to identify far-off planets by observing "transits".This refers to the dimming of a star's light when a planet passes in front of it. 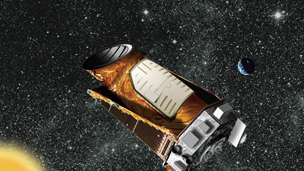 A large team of researchers then uses additional data from earth-bound telescopes to further explore these unfamiliar solar systems.

They try to calculate how big the planets are, and how closely they orbit their host stars.

Not everything that causes such a dimming eventually turns out to be a planet, however.

At the same time as the eight confirmed new exoplanets were announced by a 26-strong team spanning Nasa and multiple US institutions, the Kepler mission's own scientists released another tranche of more than 500 "candidate" planets."With further observation, some of these candidates may turn out not to be planets," said Kepler Science Officer Fergal Mullally."Or as we understand their properties better they may move around in, or even outside, the habitable zone."

Even once scientists have anointed a candidate as a confirmed exoplanet, the question of whether or not it is "Earth-like" is a fraught one, with fuzzy boundaries.The size of the habitable or "Goldilocks" zone, where a planet is far enough from its sun to hold water but not so distant that it freezes, depends on how confident scientists want to be with their guess-work.According to Dr Cardwell, just three of the eight new exoplanets can be confidently placed in that zone - and only two of those are probably rocky like the Earth.