Russian opposition leader Boris Nemtsov was shot and killed Friday night in central Moscow, the Investigative Committee of the Russian Federation said in a statement Saturday, prompting immediate speculation from fellow opposition figures that the killing was targeted.

A deputy prime minister in the late 1990s under President Boris Yeltsin, Nemtsov had been one of current President Vladimir Putin's most vocal critics.

Putin quickly condemned the killing of Nemtsov and expressed his condolences to his family, the Kremlin said. Putin also ordered three law enforcement agencies to put together a task force to investigate the shooting, Russian news agency Itar-Tass reported.

A criminal case has been opened for murder and weapons trafficking, the investigative committee said.

Nemtsov was a top official with the Republican Party of Russia/Party of People's Freedom, a liberal opposition group. He had most recently been critical of the Kremlin's handling of the Ukraine crisis.

Opposition leader Ilya Yashin said his friend had been working on a report about Russian troops and their involvement in Ukraine.

Fired on from a car

Nemtsov's death comes two days before a large opposition rally was set to take place in Moscow. Nemtsov had earlier Friday done a radio interview putting out the call to people to turn out for the rally Sunday.

After his death, party leaders decided to hold a mourning march in downtown Moscow, Itar-Tass reported.

Nemtsov was walking with a female friend just before midnight across a bridge that can be seen from the Kremlin, when a car pulled up and someone opened fire.

The area in the center city is normally busy on a Friday night, though the weather was cold and wet.

Investigators were talking with his companion, a friend from Ukraine who wasn't wounded, early Saturday. A CNN crew also observed white cars being pulled over by authorities near the scene of the shooting.

Putin said he suspected it was a contract hit meant to cause political discord, according to the President's spokesman, Dmitry Peskov.

A man like Nemtsov had many enemies, experts said.

Russia is corrupt, he said

Nemtsov, 55, had been arrested several times in the past for speaking against Putin's government.

The most recent arrests were in 2011 when he protested the results of parliamentary elections and in 2012 when tens of thousands protested against Putin. 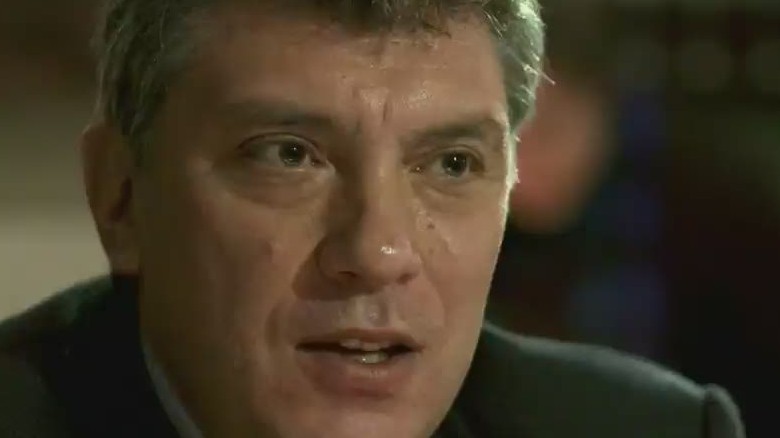 In a restaurant interview with CNN's Anthony Bourdain last year he lamented the situation for business owners.

"This is a country of corruption. And if you have business, you are in a very unsafe situation. Everybody can press you and destroy your business. That's it," Nemtsov said.

In the same interview, he did offer a bit of optimism.

"This is my country. The Russian people are in bit of trouble. Russian court doesn't work. Russian education decline every year. I believe that Russia has a chance to be free. Has a chance. It's difficult, but we must do it," he said.

Nemtsov was also a vocal critic of the 2014 Winter Olympics held in Sochi. He published a report in 2013 describing the Sochi games as one of the most "outrageous swindles" in recent Russian history. He claimed that up to 60% of the final cost -- or $30 billion -- had been embezzled.

"When we argued, Boris would tell me I was too hasty, that in Russia you had to live a long time to see change. Now he'll never see it. RIP," he wrote in one.

Who would kill Nemtsov?

But he didn't walk around with bodyguards, noted Julia Ioffe, a contributing writer to The New York Times Magazine who has covered Russian politics extensively.

"It was a very overt message of bravery," Ioffe told CNN's "AC360." "What we've seen in return is a very overt message of fear. People in the opposition will not believe anything that comes out of the Kremlin in terms of who did this. They perceive this as a message directly sent to them. When you see Boris Nemtsov's body lying with the Kremlin as a backdrop, they understand that's a message directed to them."

Critics like Yashin and Kasparov pointed fingers in the direction of Putin or a supporter of the Russian President.

"It's clearly a political murder. It's definitely a contract one," Yashin said. "I don't know who killed Boris, but I know that it's the government and personally Putin who are responsible for it. They've been constantly promoting a hatred towards everyone who doesn't support their course and thinks different."

It's something even Nemtsov himself had said he had thought about, acknowledging in an interview with Russian newspaper Sobesednik this month that he was "a little bit" afraid his mother's fears Putin would have him killed would come true.

But, he added, "I'm not afraid of him that much. If I was afraid I wouldn't be heading an opposition party and do what I'm doing."

Kasparov said the Russian President is to blame even if not directly involved.

"If Putin gave order to murder Boris Nemtsov is not the point. It is Putin's dictatorship. His 24/7 propaganda about enemies of the state," Kasparov tweeted.

"In Putin's atmosphere of hatred & violence, abroad & in Russia, bloodshed is the prerequisite to show loyalty, that you are on the team," he added.

Critics of Putin have in the past suffered miserable circumstances and demises.

Russian spy Alexander Litvinenko accused state security services of organizing a coup to put Putin in power. He was poisoned by a lethal dose of radioactive polonium and died in London in 2006. No killer has been caught.

Viktor Yushchenko, the former Ukrainian president, was poisoned, disfigured and nearly killed by a toxic dose of dioxin in 2004.

"It's the latest in a series of high-profile killings of people who have been critics of authorities in Russia over the last few years," said Peter Baker, the author of "Kremlin Rising. "We don't know yet, of course, who did this or why, but it will certainly send a terrible message to people who are fighting this cause Nemtsov has been fighting."

But Baker also said there might not be a political connection to the killing.

"In Russia there's always multiple layers, things we don't see," he said. "You can't rule out (a reason we don't know about)."

Even if it wasn't a political hit, it will still have strong political ramifications, he added.

"Nemtsov was a tireless advocate for his country, seeking for his fellow Russian citizens the rights to which all people are entitled. I admired Nemtsov's courageous dedication to the struggle against corruption in Russia and appreciated his willingness to share his candid views with me when we met in Moscow in 2009," Obama said in a written statement from the White House.

Ukrainian President Petro Poroshenko said Saturday "it is hard to believe" that Nemtsov was killed. "I have no doubt that the murderers will be brought to justice. Sooner or later. Rest in peace," Poroshenko said via Twitter.

Baker, who also is a New York Times reporter, told CNN that Nemtsov used to be powerful but had been marginalized since Putin was elected.

"He was a person who had been fierce in his criticism of Putin. He'd clearly gotten under Putin's skin on a number of occasions. A number of people had become his enemies," Baker said."There's a culture of suspicion and conspiracy in Russia, so even if in fact this had nothing to do with authority, nothing to do with a power element, a good number of people in Russia and around the world will find this suspicious."

Baker said Nemtsov tried to work with Putin's regime at first but soon switched to the opposition.

"History will remember him as someone who took chances, who risked his life literally to speak out in a country where speaking out is not encouraged, to say he least," Baker said.