Israeli Prime Minister Benjamin Netanyahu warned Tuesday that a proposed agreement between world powers and Iran was "a bad deal" that would not stop Tehran from getting nuclear weapons -- but would rather pave its way to getting lots of them and leave the Jewish State in grave peril.In a dramatic address to the U.S. Congress at what he said was a "fateful" crossroads of history, Netanyahu openly sided with President Barack Obama's Republican critics and sparked an immediate and furious reaction from the White House, as relations between Washington and Israel spun into their deepest chasm for many years.

"We have been told that no deal is better than a bad deal. Well this is a bad deal. It is a very bad deal. We are better off without it," Netanyahu said, building a case that Iran was not just bent on developing nuclear weapons but was determined to "gobble" up defenseless countries in a wider play for dominance in the Middle East. 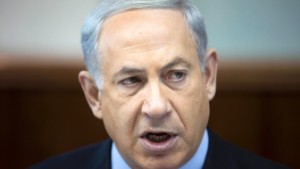 The response from the White House was swift and did not even try to disguise anger at Netanyahu, who has been locked in a public tussle with Obama for almost his entire administration and has stepped up his criticism as talks between world powers and Iran on a deal reach a crucial final stage.

Speaking to reporters shortly after Netanyahu finished his remarks, Obama said there was "nothing new" in Netanyahu's address.

"But on the core issue, which is how do we prevent Iran from obtaining a nuclear weapon, which would make it far more dangerous and would give it scope for even greater action in the region, the prime minister didn't offer any viable alternatives," Obama told reporters before meeting with Defense Secretary Ash Carter.

A senior administration official said in language, extraordinarily strong considering the long alliance between the U.S. and Israel, that the speech contained "literally not one new idea; not one single concrete alternative; all rhetoric, no action."

The official said that despite Netanyahu's tough rhetoric, the alternatives to seeking a deal with Iran were much worse and that military action or more stringent economic sanctions would not set its nuclear program back as far as an agreement that would keep it from taking the final steps towards an atomic arsenal for a decade.

"Without a deal, Iran will certainly advance its program -- installing advanced centrifuges, fueling its plutonium reactor and reducing or eliminating its breakout timeline. That would leave us with the choice of accepting a nuclear-threshold Iran or taking military action," the official said.

"Where is the alternative? Simply demanding that Iran completely capitulate is not a plan, nor would any country support us in that position. The prime minister offered us no concrete action plan."

Netanyahu was not in Washington at the invitation of Obama but was asked to give the speech by Republican House Speaker John Boehner in a move that exposed the U.S.-Israel alliance to treacherous domestic partisan crossfire. The fact that he is facing a tough reelection vote in two weeks also fueled suspicion among administration officials that Netanyahu was using the grand stage of a speech to Congress for a political payoff.

His speech trapped many Democrats between their long-term staunch support from Israel and their own president, and appeared to be a painful experience.

"I was near tears throughout the prime minister's speech -- saddened by the insult to the intelligence of the United States as part of the P5 +1 nations," said Nancy Pelosi, the leader of Democrats in the House, referring to the group of world powers negotiation with Tehran, "and saddened by the condescension toward our knowledge of the threat posed by Iran and our broader commitment to preventing nuclear proliferation."

Veteran Democratic Sen. Dianne Feinstein of California described Netanyahu's speech as "powerful" but said he had failed to lay out a solution that Israel would find "agreeable." But Feinstein also signaled disquiet with the administration's plan for a deal with Iran to last 10 years, saying that 15 or 20 years would be a better timeframe.

"One of the things that I've seen in my lifetime is time goes by very fast, and 10 years is not a very long time," said Feinstein.

In a speech punctuated by multiple standing ovations but boycotted by over 50 Democratic lawmakers, Netanyahu warned that the proposed agreement would allow Iran's breakout time -- the period that it would take to race to a nuclear weapon -- to be much shorter than the one year that the U.S. administration is aiming for. Following fierce warnings by U.S. officials, however, he appeared to stop short of unveiling intricate details of the talks between world powers and Iran which Washington says could dash hopes of an agreement.

"Ladies and gentleman, history has placed us at a fateful crossroads. We must now chose between two paths," Netanyahu said, calling on nuclear negotiators to call Iran's path and hold out for an agreement that did not leave Tehran with "a vast nuclear infrastructure" and "no easy path to the bomb."

Netanyahu also warned that Tehran was embarked on a long covert terror war against the United States and Israel as well as playing "hide and cheat" to conceal the true extent of its nuclear program. 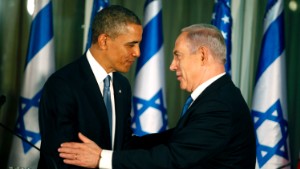 "The greatest danger facing our world is the marriage of militant Islam with nuclear weapons," Netanyahu said.

"That is exactly what could happen if the deal being negotiated is accepted by Iran. That deal would not prevent Iran developing nuclear weapons. It would all but guarantee that Iran gets those weapons, lots of them."

He added that Iranian proxies like Hezbollah were "clutching Israel with three tentacles of terror," and that Tehran was "charging into the void" and "gobbling up" nations splintered by turmoil in the Middle East as Iran's Supreme Leader Ayatollah Ali Khamenei spewed the "oldest hatred with the newest technology. He tweets that Israel must be annihilated."

He also said the United States should not be fooled because it had a common interest with Iran in seeing the demise of ISIS: "The enemy of your enemy is your enemy," and he warned that the Islamic Republic had a long history of attacking the United States and Israel through a global anti-terror network.

The prime minister began his address by saying that he deeply regretted that his speech was being seen as a political ploy, after walking into the House chamber to a hero's welcome as lawmakers stood and cheered. He said he would "always be grateful" to President Barack Obama for his support of Israel, including much that will never be known for national security reasons.

Top U.S. officials ahead of the speech sternly warned Netanyahu not to reveal secret details of the talks, which are entering a crucial final stage, warning such revelations could have a disastrous impact on hopes for a deal.

"I am confident we have an inclusive and comprehensive picture of what is going on," Intelligence minister Yuval Steinitz told CNN, though he declined to elaborate on the source of the information other than to say it was not from American or "other sources."

Netanyahu's implicit argument was that the size of the enrichment program that Iran could be allowed to keep under the deal, reportedly around 6,000 centrifuges, and its demand to retain a research and development program on more advanced nuclear technology could reduce the time that it would take to race towards a bomb to less than a year if it decided to make one. The Obama administration says its goal is to freeze Iran's program to ensure that breakout time is a year or more to ensure the world has time to act should Tehran cheat on an agreement.

Israeli officials also warned that a research and development program that Iran is demanding the right to keep could help it enrich uranium, the key ingredient for a nuclear bomb, and allow it to break out in as little as six months.

Sources close to the negotiations in Geneva, however, told CNN's Jim Sciutto that the provision regarding more than 6,000 centrifuges is just one of the options on the table of the deal. The sources also said the advanced research program being contemplated would not allow Tehran to build advanced centrifuges that would help it shorten the breakout time.

A betrayal of trust?

White House spokesman Josh Earnest warned on Monday that any revelations using sensitive information would be "betray the trust between our allies."

"That would be true even if the -- these sources were to claim that they had obtained the information from somewhere else," Earnest said.

The speech, which was organized by House Republican Speaker John Boehner without the White House's prior knowledge, has already fueled a bitter domestic political row, as talks between Iran and world powers approach an end of March deadline for a framework agreement.

Obama wasn't expected to watch Netanyahu's address. Instead, he'll be meeting with several of his European counterparts via video conference to discuss the situation in Ukraine, the White House announced Tuesday.

Obama bluntly said Monday that Netanyahu had been proven wrong about his diplomatic initiative before, telling Reuters that Netanyahu has in the past made "all sorts of claims" about the deal and that "none of that has come true."

Iranian Foreign Minister Javad Zarif told CNN Tuesday that Netanyahu was trying to disrupt talks which he is currently having with Secretary of State John Kerry in Switzerland. "I don't think trying to create tension and conflict helps anybody," Zarif said.

Netanyahu's aides say that Tuesday's speech represented the last chance for Israel to register its dismay at the proposed deal, ahead of a late March deadline for a political framework to be reached between the parties, so it is vital that he explains to lawmakers what is in the draft. But senior Israeli officials also said that senior Democrats asked Netanyahu not to use any rhetoric that would embarrass the president. More than 50 Democratic lawmakers are boycotting the Netanyahu speech.

'A bad deal is worse than no deal'

National Security Adviser Susan Rice told the America Israel Public Affairs Committee annual meeting on Monday that the administration would never sign an agreement that did not guarantee Israel's security.

"I want to be very clear. A bad deal is worse than no deal. If that is the choice, there will be no deal."

Rice also said that Israel's insistence that Iran must stop all enrichment of uranium was unrealistic and took a clear shot at Netanyahu on the eve of his speech.

The appearance on Capitol Hill amounts to a highly unusual case of a foreign leader, who has a fraught relationship with Obama, effectively deciding to side with Republicans in an effort to derail a potentially historic initiative that is one of the president's top remaining priorities.

"The purpose of my address to Congress," Netanyahu told the AIPAC on Monday "is to speak up about a potential deal with Iran that could threaten the survival of Israel."