Prince Charles opens up about love and life. In an exclusive interview ahead of his U.S. tour -- and ahead of his 10-year wedding anniversary -- Prince Charles paid tribute to the "brilliant" way his wife, Camilla,Duchess of Cornwall, has taken on the "real, real challenge" of defining her public role.

"It's always marvelous to have somebody who, you know, you feel understands and wants to encourage. Although she certainly pokes fun if I get too serious about things. And all that helps," Prince Charles told CNN. 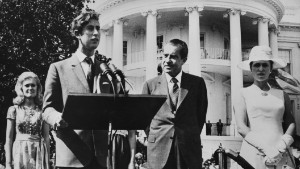 The couple first visited the U.S. together as newlyweds in 2005, and Camilla was confronted by hardcore Princess Diana fans with abusive placards. Polls at the time found that between 57% and 73% of Brits opposed Charles' new wife being known as queen. If you go back even further, to 1997, the year Diana died, an Ipsos MORI poll put it at 86%.

But there's been a change in sentiment since they married. A new poll conducted by Comres for CNN found that only 35% now oppose Camilla being known as queen. Nearly one in four said they liked her more now than they did 10 years ago.

This coincides with a change in palace strategy -- away from the aggressive spin machine of the 1990s to simply allowing Camilla to be herself. When she appears in public, she's either seen supporting her husband or promoting a set of causes she has a genuine connection with.

Prince Charles praised how his wife has handled herself.

"She's done an enormous amount for the whole issue around osteoporosis, which of course runs in her family," he said, noting that Camilla's mother and grandmother both suffered from the bone disease.

He also points to other issues Camilla is associated with, including literacy and preventing sexual violence.

The Duchess of Cornwall, by sticking to what she knows and cares about, is able to connect with the people she meets, which doesn't always come across on camera.

When Charles and Camilla married in 2005, there was huge sensitivity around the legacy of Diana, who was expected to be queen herself.

With this in mind, royal aides announced that Camilla would not use the title of Queen when Charles becomes King. Instead she would be known as Princess Consort. That still stands, although the public of today looks less likely to oppose the title of Queen.