Dozens of people were injured Sunday in another night of violence in Hong Kong, as the city marked its fifteenth consecutive weekend of anti-government protests.

Thousands of people took part in a peaceful -- albeit unauthorized -- march from Causeway Bay to government offices in Admiralty, calling for the government to respond to the protest movement's five demands. That quickly turned violent after radical protesters gathered outside the legislature and began throwing bricks and petrol bombs at police lines.

Police responded with tear gas and water cannon, using jets of blue dye for the second time. The dye -- which is also laced with tear gas -- is designed to indelibly mark protesters and make them easy to arrest later.

The heavy response drove protesters back from the legislature and began a night of cat-and-mouse pursuit throughout the city, which saw protesters set fires and vandalize subway stations as police made sporadic arrests.

At least 28 people were injured Sunday, according to the hospital authority. Of those, 13 men and four women have been discharged as of Monday morning, while 11 remain in hospital. Two men are in a "serious condition," the authority said. 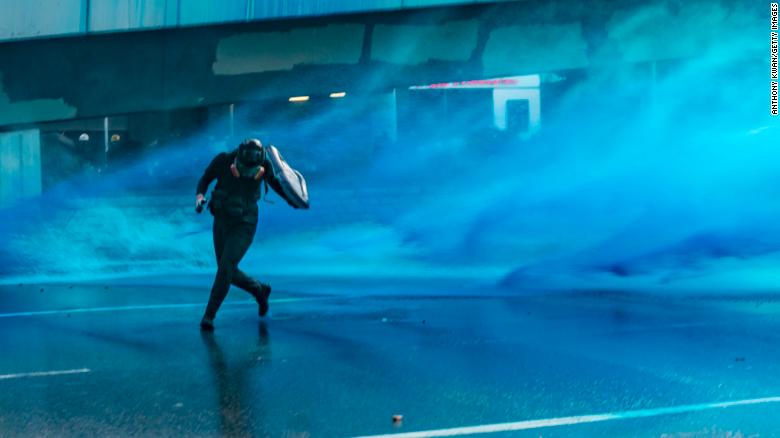 Pro-democracy protesters react as police fire water cannons at them outside the Central Government Complex on September 15, 2019 in Hong Kong.

While the violence between police and protesters was fairly regular compared to previous weeks, the ugliest scenes occurred at the edges of the protests, where both protester and pro-government groups attacked people who disagreed with them.

CNN reporters saw a mob of masked protesters attacking a man in the Tin Hau neighborhood after a brief confrontation, leaving him dazed and bleeding on the floor. In an earlier incident, video shared widely online showed a middle-aged man wearing a blue shirt attacked and left apparently unconscious by a large group of mostly young, black-clad protesters on Gloucester Road. According to the South China Morning Post, the unidentified man had shouted pro-police slogans before the attack. 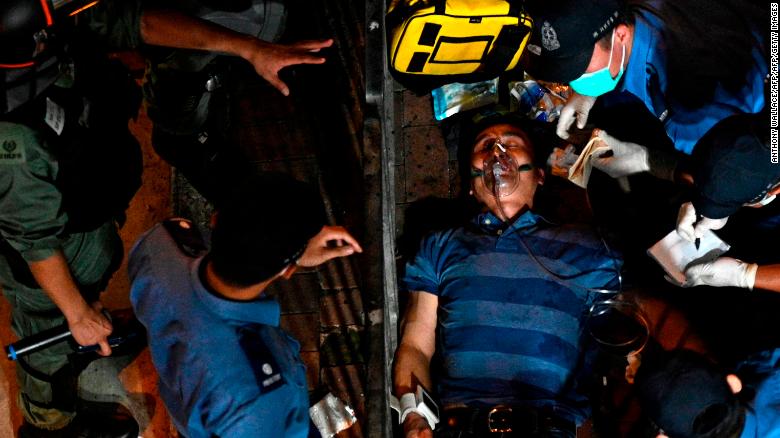 A man is seen to as he lies injured after he was surrounded and beaten on a street in North Point in Hong Kong on September 15, 2019.

Later on Sunday, a group of mostly middle-aged men were seen striking and threatening protesters in the North Point area. The area has a large mainland Chinese immigrant population, and there have been attacks on protesters in the area in past weeks.

Sunday's violence came after a number of angry scuffles on Saturday between pro and anti-government groups, though none reached the level of violence seen the following day. Pro-Beijing groups sang the Chinese national anthem and pulled down "Lennon Walls," collections of notes and flyers erected by protesters, around the city.

On Friday, pro-government lawmaker Junius Ho called on patriotic Hong Kongers to "get together and clean Hong Kong." Ho previously praised alleged triads who attacked protesters in Yuen Long, and appeared to threaten to kill one of his colleagues after they argued on a radio show.