The Chinese government and state-run media have accused Western countries of hypocrisy in their attitude to violent protests in Spain, Chile and Hong Kong over the past week.

Some articles even allege that demonstrations in Europe and South America are the direct result of Western tolerance of Hong Kong unrest, now in its 20th week.

Speaking to reporters on Monday night, Foreign Ministry spokeswoman Hua Chunying said that the response by Western countries to the protests showed "democracy and human rights are only a pretentious cover for Western interference in Hong Kong affairs."

"More and more people have come to realize that 'human rights', 'democracy' and 'beautiful sights' preached by some Western politicians are just illusory as a mirage in the desert," she said.

In a commentary published in the state-run Beijing News on Sunday, former Chinese diplomat Wang Zhen wrote "the disastrous impact of a 'chaotic Hong Kong' has begun to influence the Western world."

Over the past week, protesters have clashed with authorities in all three locations for different reasons, but Chinese state media alleged that demonstrators in Chile and Spain were taking their cues from Hong Kong. 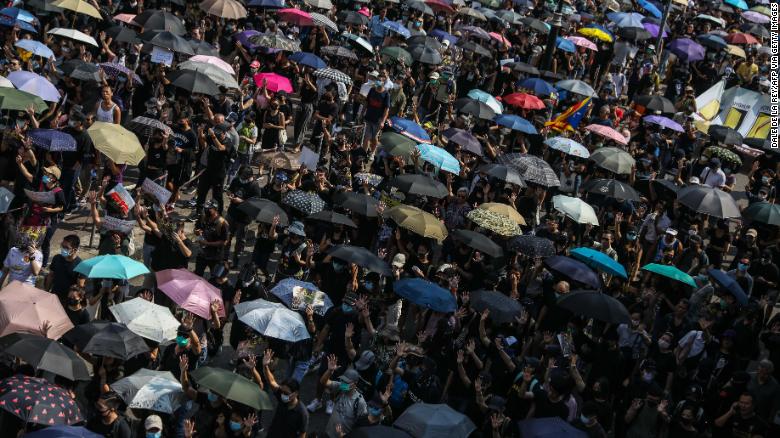 Protesters attend a pro-democracy march in Hong Kong on October 20.

Hong Kong's protests have become increasingly destructive in the past month, with widespread vandalism and trashing of stores seen as pro-Beijing during demonstrations.

On Sunday a march in the popular shopping district of Tsim Sha Tsui quickly deteriorated into violence as petrol bombs were thrown and fires were lit in subway stations and outside shops.

According to Wang, protesters in Spain had begun to adopt Hong Kong tactics, including the "Be Water" slogan to avoid police.

Protesters have been gathering on the streets of Barcelona to call for Catalonia independence after pro-independence politicians were imprisoned with lengthy sentences. More than 200 police officers have been injured and 171 vehicles damaged since the protests began last week. 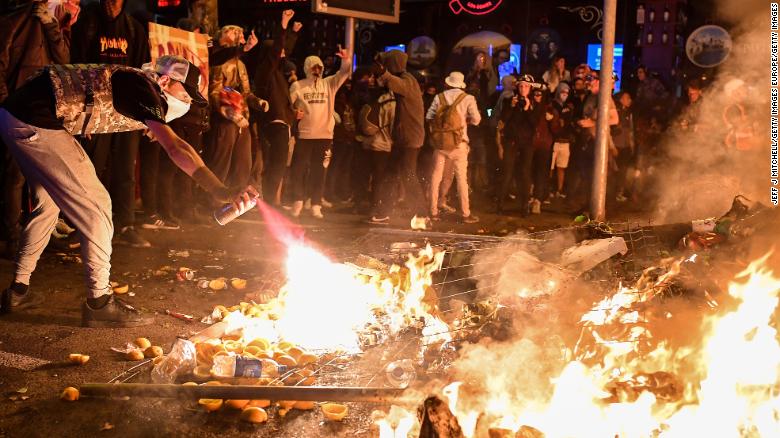 Demonstrators light fires following a week of protests over the jail sentences given to separatist politicians by Spain's Supreme Court, on October 19 in Barcelona.

In Chile, the military issued a curfew for the capital city of Santiago after prolonged demonstrations against a hike in public transport costs. Three people were killed in a supermarket fire in the city on Sunday.

The same day, an editorial in state-run tabloid Global Times accused Hong Kong demonstrators of "exporting revolution to the world."

"The West is paying the price for supporting riots in Hong Kong, which has quickly kindled violence in other parts of the world and foreboded the political risks that the West can't manage," the editorial said.

The United States has repeatedly voiced support for the Hong Kong protesters, to the fury of the Chinese government. 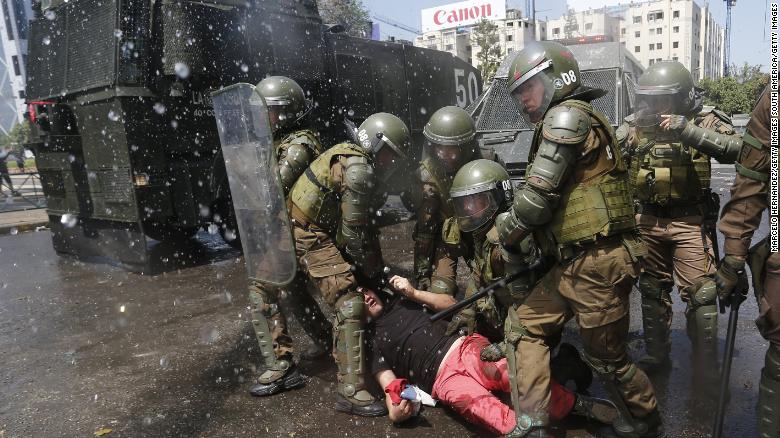 Anti-government demonstrators clash with police as they protest against cost of living increases on October 20 in Santiago, Chile.

On October 14, the US House of Representatives passed legislation in support of the Hong Kong activists which could see major financial penalties imposed on the major Chinese financial hub if Beijing cracks down on the city.

In a video editorial posted to the Global Times official Twitter on October 17, editor Hu Xijin suggested protests could spread throughout the West.

"There are many problems in the West and all kinds of undercurrents of dissatisfaction. Many of them will eventually manifest in the way the Hong Kong protests did," he said.

"Catalonia is probably just the beginning."

There has been a series of bloody attacks on pro-protester and pro-Beijing supporters in Hong Kong this month. On October 12, a police officer was slashed in the neck while walking through a subway station, leading to two arrests. He was taken to hospital in a stable condition.

Three days later, Jimmy Sham, a prominent protest march organizer, was attacked by a group of men wielding hammers and knives. He was left with wounds to the back of his skull and forehead.

There has been no sign of an end to the ongoing demonstrations, which started June to protest against a controversial China extradition treaty, but have since broadened to include calls for democracy. 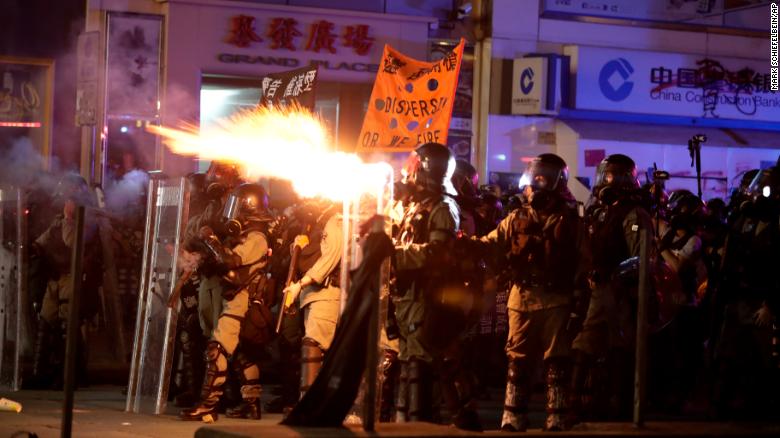 In a commentary published in People's Daily, the official Chinese Communist Party mouthpiece, Fudan University academic Shen Yi accused the West of "double standards" in its responses to protests in other countries.

"We still remember that certain people in the West called the large demonstrations in Hong Kong 'a beautiful sight to behold'," Shen wrote, before asking if those same commentators would support Catalan protests.

"If they don't, they are applying double standards to the Hong Kong and Catalonia problems."

In a separate opinion piece published in People's Daily on Friday, Wang, the former diplomat, asked why Hong Kong's protesters were described as "warriors for freedom and democracy," while in Spain the Catalan demonstrators were "separatists."