The ruling is a blow to the Trump administration's claims that the House is not conducting a valid impeachment inquiry since there's been no formal vote to authorize the probe.

In a lengthy opinion, Chief Judge Beryl Howell of the US District Court in Washington, DC, said the House clearly is conducting an impeachment inquiry.

"(A)n impeachment trial is an exercise of judicial power," Howell wrote. "Contrary to (the Justice Department's) position -- and as historical practice, the Federalist Papers, the text of the Constitution, and Supreme Court precedent all make clear -- impeachment trials are judicial in nature and constitute judicial proceedings."

The House Judiciary Committee had gone to court seeking information in the Mueller report that is redacted because it came from secret grand jury proceedings. 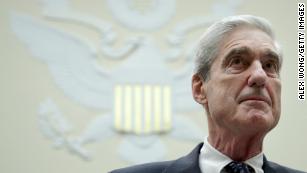 The bar for releasing such information is high, but Howell said that "to avoid a possible injustice in the impeachment inquiry, that this need for disclosure is greater than the need for continued secrecy."

Mueller, she noted, did one a lot of the work in his multi-year investigation.

"In carrying out the weighty constitutional duty of determining whether impeachment of the President is warranted," Howell wrote, "Congress need not redo the nearly two years of effort spent on the Special Counsel's investigation, nor risk being misled by witnesses, who may have provided information."

She adds, "Tipping the scale even further toward disclosure is the public's interest in a diligent and thorough investigation into, and in a final determination about, potentially impeachable conduct by the President described in the Mueller Report."

Howell says the House is already conducting a legal impeachment investigation and that the courts can assist Congress in getting the administration to hand over documents or allow testimony, said Steve Vladeck, CNN legal analyst and professor at the University of Texas School of Law.

"Assuming the Court of Appeals agrees with her in these respects," Vladeck said, "that will not only put nearly everything that the House is doing on firm legal ground, but it would also suggest that the White House's obstinacy was remarkably short-sighted."

Furthermore, Howell writes, "Impeachment based on anything less than all relevant evidence would compromise the public's faith in the process."

"The court's thoughtful ruling recognizes that our impeachment inquiry fully comports with the Constitution and thoroughly rejects the spurious White House claims to the contrary," said Nadler.

The Justice Department is reviewing the decision, a spokesperson said.

What the House wants

MORE ON THE IMPEACHMENT INQUIRY FROM CNN

Trump impeachment tracker: Following all the action in Congress

Trump's Ukraine scandal: Who's who?

Key allegations from the Ukraine whistleblower are true, despite what Trump says

In requesting the information, the House said in court filings that some redacted grand jury details in the Mueller report relate to former Trump campaign chairman Paul Manafort's associations with Ukraine -- of which he has many -- and to Trump's interest in WikiLeaks' plans to release documents that could help his 2016 campaign.

If the House were to see details Mueller described addressing whether Trump had been aware of, and encouraged, his campaign's intended outreach to WikiLeaks in 2016, it could be another political bombshell.

Trump, in written answers to Mueller's questions, wrote that he did not recall knowing of interactions between his top campaign officials and WikiLeaks, or recall conversations about what WikiLeaks might have on his opponent, Hillary Clinton, or the Democrats before it was released.

It's not clear why the House believes details that would illuminate this answer are hidden by grand jury proceedings.

The portion of the Mueller report about "contacts with the (Trump) campaign about WikiLeaks" is largely redacted because if made public, it could harm an ongoing matter. Fewer redactions in this section relate to the grand jury, though the House lawyers cite one footnote in Mueller's obstruction of justice analysis regarding Manafort speaking to Trump after WikiLeaks released hacked documents in July 2016.

In his report, Mueller also describes a conversation between Trump and then-deputy campaign chairman Rick Gates where "Trump told Gates that more releases of damaging information would be coming," the Mueller report says.