In western markets, shoppers can buy beef, chicken, pork, and, if they're lucky, perhaps some duck or bison.

But the options in China can be a bit more exotic.

Vendors in small city markets often sell wild animals including rodents, yak, snakes and even porcupines, and experts say that makes them far more dangerous. The meat could contain deadly pathogens like the coronavirus. 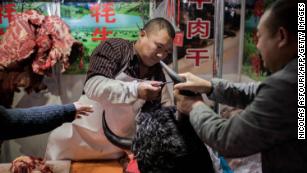 This picture taken on January 15, 2020 shows a butcher selling yak meat at a market in Beijing.

Highlighting those fears, Chinese officials announced on Sunday that the trading of wild animals would be temporarily suspended in hopes that would help contain the outbreak. 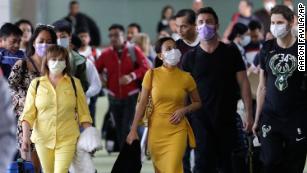 Wuhan coronavirus: Is it safe to travel?

Any businesses or operators found breaching the ban will be shut down and the ban will "not be lifted until the epidemic is declared over," a joint statement by three government agencies said, according to state-run news agency Xinhua. Serious violators will be handed over to police for criminal investigation, the statement added.

As of Monday, more than 2,800 cases of the Wuhan coronavirus have been confirmed in China and more than 80 people have died. More than a dozen cities across China have been either fully or partially locked down by authorities, impacting nearly 60 million people.

The virus is becoming a worldwide threat as dozens of confirmed cases have been identified in 14 places outside of mainland China, including at least five in the US.

Source of the outbreak

Officials from the Chinese Center for Disease Control and Prevention said they have successfully isolated the virus in samples taken from a seafood and wildlife market in Wuhan believed to be the source of the outbreak.

Nearly three dozen of the samples taken from the market contained the nucleic acid of the coronavirus, and 31 of those samples were collected from the section of the market dedicated to the sale of wild animals, the CDC said.

Footage taken from inside the market show wild animals such as snakes, raccoon dogs, porcupines and deer inside cages waiting to be purchased. The footage, which has not been independently verified by CNN, was posted on Chinese social media site Weibo.

The market has since been closed for disinfection. 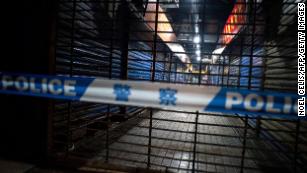 Members of staff of the Wuhan Hygiene Emergency Response Team conduct searches on the closed Huanan Seafood Wholesale Market in the city of Wuhan, in the Hubei Province, on January 11, 2020.

Professor Leo Poon from Hong Kong University was one of the first scientists to decode the coronavirus.

"I would believe that this Wuhan outbreak was caused by animal virus and then the animal actually carried this back to the human," Poon said.

China's demand for wild animals is largely driven by the belief that these animals provide health benefits when consumed.

The coronavirus that caused the 2003 SARS outbreak was traced to the civet cat, a wild animal considered a delicacy in parts of South China. The civet is used in the popular "Dragon-Tiger-Phoenix Soup," which is believed by locals to help with arthritis, stimulate poor blood flow and revive decreased libido, according to Slate. 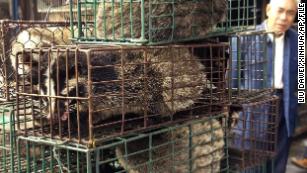 A man looks at caged civet cats in a wildlife market in Guangzhou, capital of south China's Guangdong Province in 2004.

Despite the SARS outbreak claiming more than 700 lives, recent footage shows civet cats being back on sale at a market in South China.

Call for a sustained ban

While the trade of endangered species such as elephants and rhinos is already illegal in China, unprotected species can often be found in markets in smaller cities. Now, wildlife advocates are applauding China's move to temporarily ban the trade of wild animals, but some believe the ban should be permanent.

"Wuhan is a wake-up call. This is mother nature's revenge," said Freeland founder Steve Galster in a video posted to the organization's Facebook page. Freeland is working to end human and wildlife trafficking.

He added that a permanent ban would not only save human lives, but a lot of wildlife globally as well.