Russian President Vladimir Putin has signed a law paving the way for him to run for two more presidential terms, potentially extending his rule until 2036.

Putin, who turns 69 this year, is currently serving his fourth presidential term, which is set to end in 2024. The new legislation, announced on Monday, could allow him to serve two more six year terms, should he choose to stand for and win reelection both times.

The new law formalizes the results of last year's referendum on amendments to Russia's constitution.

As well as resetting the clock on Putin's term limits, the referendum was also a vote on a range of other amendments, including a provision that defined marriage strictly as a "union of a man and a woman."

Previously, Putin's efforts to stay in power -- including a job swap with his then prime minister, Dmitry Medvedev, in 2008, returning to the presidency in 2012 -- have attracted mass protests and criticism from overseas.

Earlier this year, thousands of people protested across Russia over the jailing of opposition figure Alexey Navalny, who was detained in January on return to the country five months after he was poisoned with the nerve agent Novichok.

Anti-corruption campaigner Navalny has been a constant thorn in Putin's side for years now, with a recent video purporting to expose an extravagant secret palace on Russia's Black Sea coast he said was built for the President attracting millions of views on YouTube.

Navalny was flown to Germany for emergency treatment following his poisoning in Siberia last year, which he says was ordered by Putin and carried out by agents of Russia's security service, the FSB. The Kremlin has repeatedly denied the allegations.

Following his return to Russia, he was detained and later imprisoned for two and a half years for breaching parole conditions relating to a 2014 case. Navalny is currently being held at a penal colony in Pokrov, east of Moscow, where he has gone on hunger strike. 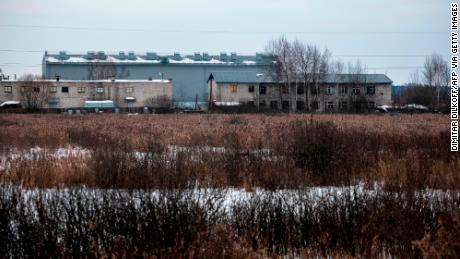 The rough conditions inside prison camp where Navalny is being held

On Monday, Navalny said he would continue the strike despite having a high temperature and a bad cough amid a tuberculosis outbreak amongst his prison cellmates, according to an Instagram post shared by his team on his official account.

"The third person from my squad has been hospitalized recently with tuberculosis," Navalny said. "There are 15 people in the detachment, that is, 20% of them are sick, this is much higher than the epidemiological threshold. And what? Do you think there is a state of emergency, ambulance sirens are blaring? No-one cares, the bosses are worried only about how to hide the statistics."

He criticized Russian state media's recent coverage of conditions inside the penal colony, after Maria Butina, an employee of state-run broadcaster RT, visited the prison and said it was "practically exemplary."

Butina served time in a United States prison after she pleaded guilty to trying to infiltrate conservative political circles and promote Russian interests before and after the 2016 presidential election.

On Instagram, Navalny said there "are unsanitary conditions, tuberculosis, lack of medications. Looking at the awful plates, in which they put our gruel, I am generally surprised that there is no Ebola virus here yet."

He added that the prison didn't have the sustenance and nutrients required to keep prisoners healthy.

"I continue my hunger strike, of course," Navalny wrote in the post. "I have a legally guaranteed right to invite a specialist doctor at my own expense. I will not give it up, prison doctors can be trusted just as much as state TV."

A prominent opposition-linked Russian doctors' union, Doctors' Alliance, run by a Navalny ally, said later on Monday via a YouTube video that a group of physicians will go to Navalny's prison on Tuesday to demand proper medical attention for the opposition figure.