Last summer, a Chinese man approached me on a crowded Beijing street and asked me in Mandarin if I was Chinese American. It seemed innocent enough, as I was speaking English with expat friends.

But after I nodded, he switched to English and bellowed "go back to where you f**king came from".

These stinging words are familiar for Asian Americans living in the United States. But it was jarring to hear the phrase shouted at me in China.

In the moment, I let out a laugh: As a Chinese American, I have now been told to get out of each country for the other. It was a moment of realization that regardless of where I go, I will always be a foreigner.

I was born and raised in America, but over the past few years, I've lived in Beijing, Hong Kong and now Japan -- where the majority of people I'm surrounded by look like me and assume I'm a native. At first, that gave me an inexplicable -- albeit superficial -- sense of belonging that I never felt in America.

In the US, my answer to the constant question "where are you from?" is never enough. When I say America, it's almost always followed by: "But where are you really from?" Countless times I've been asked why I can speak English "without an accent." And Asian American women's experiences of racism are inextricably linked to misogyny. We've had nearly every part of our bodies (eyes, hair, feet, mouths, skin, and even private parts) appraised on the basis of our race. Our personalities are assumed by strangers to be subservient. 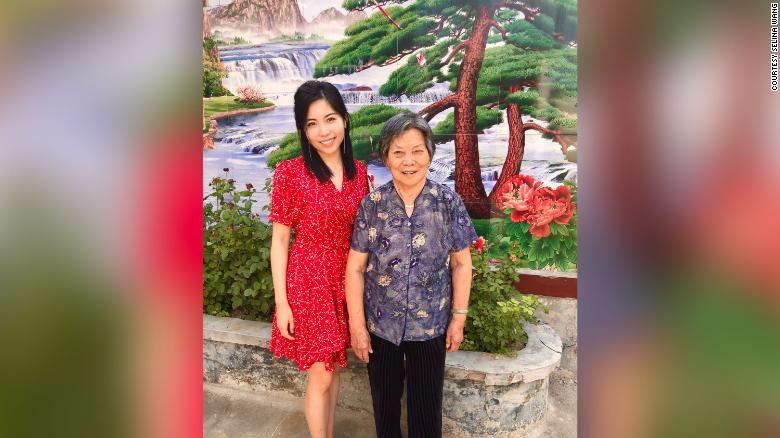 Selina Wang with her grandmother at her relatives' home village in Henan, China.

Recently, as US-China tensions have ratcheted up, with rhetoric from both sides turning toxic, I've also faced animosity in China for being American. Chinese state media has fueled anti-American nationalism, calling the US the "enemy of the world" at the height of the US-China trade war. Meanwhile, in America, roughly nine-in-10 adults consider China a competitor or enemy, according to a Pew survey.

"There's this consistent theme that when there are tensions with an Asian country, people who are Asian American or who look Asian American are often scapegoated," Christopher Lu, former Cabinet Secretary to Barack Obama, said on CNN.

The irony is that often Asian Americans have a traumatic, complex, or even non-existent relationship with the distant country they're held accountable for.

My parents immigrated from China to the US for graduate studies before I was born.

Later, my grandparents, who had been farmers in China, came to America to help care for my sister and me. They weaved pieces of their Chinese lifestyle into the fabric of our suburban American home, doing what felt most familiar to them. They turned our yard into a vegetable garden, using the produce for dumplings and other Chinese comfort foods. 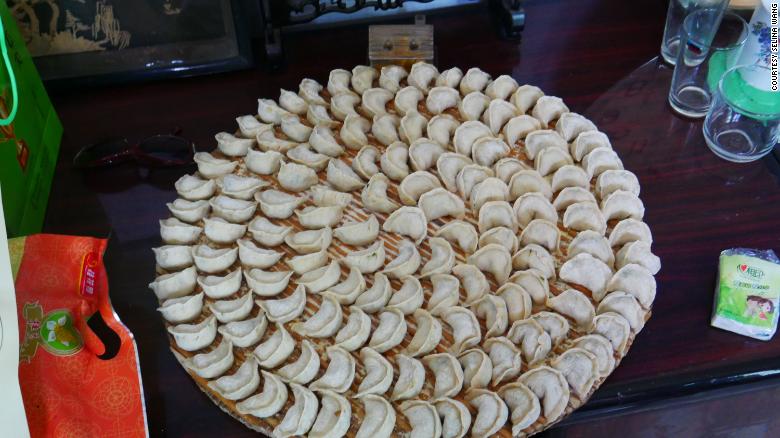 My grandparents never had the opportunity to go to school. They taught themselves how to read and write Chinese, and proudly passed their knowledge to their grandchildren. Chinese became my first language.

I could barely speak English when I started pre-school. My mother became concerned about my thick Chinese accent, so we started to speak English more at home. From there, I only became more self-conscious of my "Chinese-ness."

By elementary school, I asked my parents to stop packing Chinese food for lunch. I only wanted PB&Js after getting teased for bringing brown-colored tea eggs -- one of my favorite foods -- to class. The other kids thought they were rotten eggs.

Moments like these made me long to be seen as the American that I am. My family, their traditions, and those of other Asian Americans in my community were part of the America I knew -- a melting pot of cultures.

In fact, it was China that felt foreign. During each annual summer trip there, I felt like a tourist, and deep down, I wanted to be treated as such. I was so proud to be an American.

But with each visit, I'd learn more about my family history and witness China's rapid development. 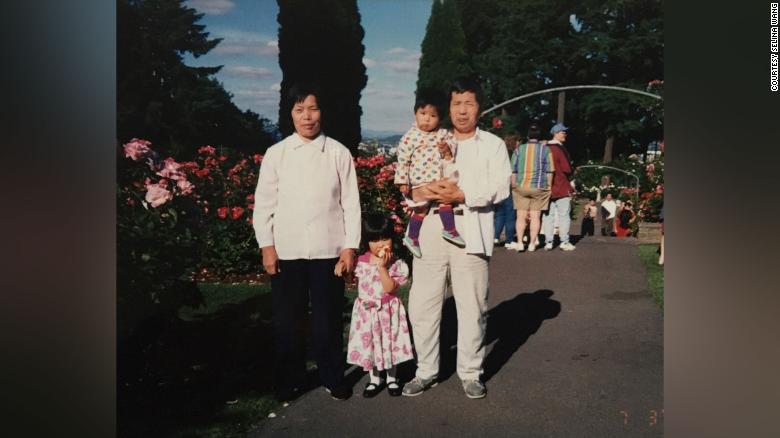 Selina and her sister with their grandparents in the US.

First, we would visit my father's village in the countryside, and he'd show my sister and me the mud hut he had once called home. He would often remind us that during the Cultural Revolution, my grandmother had to water down a single portion of porridge every day to feed six people.

Then we would visit my mother's family in Hubei province. More than a dozen of us would cram around a tiny table, eating bowls of sesame noodles, while her family would recount different memories of trauma, fraught with political persecution and suicide. 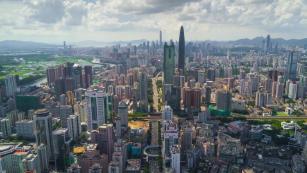 The rise of China's 'Silicon Valley'

My family told stories of poverty and oppression as though they were simple childhood memories. For my sister and me, they were allegories with a single lesson: we should be grateful to be born in the US -- a free, tolerant, and wealthy society. As immigrants, they would say, upward mobility can only come by putting your head down and outworking the rest.

Throughout the years, however, I began to notice the gap narrow between my relatives' lives in China and mine in the US. Villagers in my father's countryside town slowly gained electricity, running water, cars, and phones. My cousins in the city no longer wanted clothes from America as gifts -- they liked the styles in China more.

In fact, there was almost no material possession we could bring from America they couldn't already find in China. Yet as their physical quality of life improved, their access to information worsened, as the Chinese government tightened internet controls and censorship.

And as the pandemic spread around the world, the news they read differed more and more from mine. 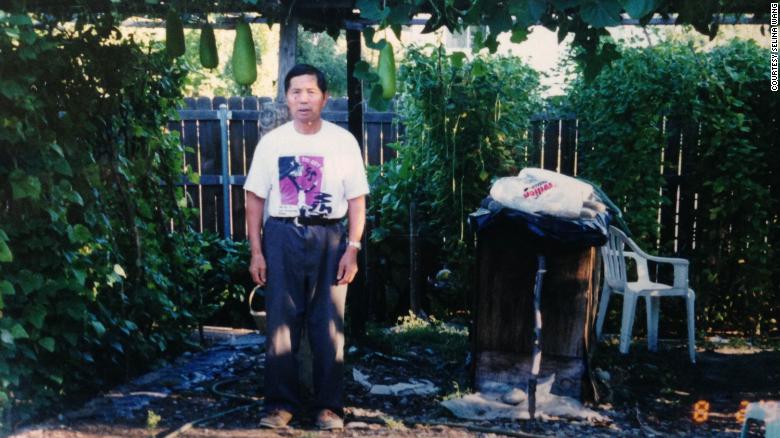 Green thumb: Selina Wang's grandfather in the family's yard, which they converted into a vegetable garden.

I was living in Beijing when the coronavirus outbreak began, reporting on cases of a mysterious new pneumonia in Hubei province in December 2019.

My cousin, a nurse, was working on the front lines at ground zero of the pandemic near Wuhan. We stayed in contact, as she worked long shifts without enough protective equipment, feeling the angst of being separated from her newborn son and family. My other relatives were under strict lockdown for months, facing pandemic-induced fear and anxiety. The same stress we all now know.

When the pandemic reached the US, my mother called me to say she desperately wanted to wear a mask outside. One of our close family friends had died of Covid-19 in Wuhan early in the pandemic, and my mother was certain the virus was far deadlier than most believed at the time.

But she feared being discriminated against as "the Chinese lady who has Covid-19." At the same time, my Asian American friends were telling me they had been spat on, yelled at in the street, and even verbally attacked in restaurants for "bringing the virus to America." 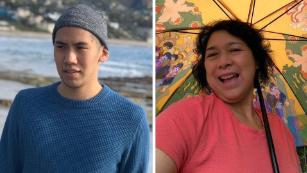 We asked Asian Americans to share their experiences with hate

Meanwhile, China and America engaged in a war of words over the pandemic. Then US President Donald Trump routinely called Covid-19 the "China virus" and "kung flu", fanning racism and hatred that fueled attacks on Asian Americans.

The Stop AAPI Hate advocacy group has tallied more than 3,795 reported incidents of hate against Asian Americans and Pacific Islanders in the US during the pandemic, including the killings of six women of Asian descent at Atlanta spas, which triggered rallies across the country.

US Secretary of State Antony Blinken has said China represents America's "biggest geopolitical test of the 21st century," as the only country with enough power to challenge the current international system. Meanwhile, since 2010, China has been calling for a "new model of major-power relations." 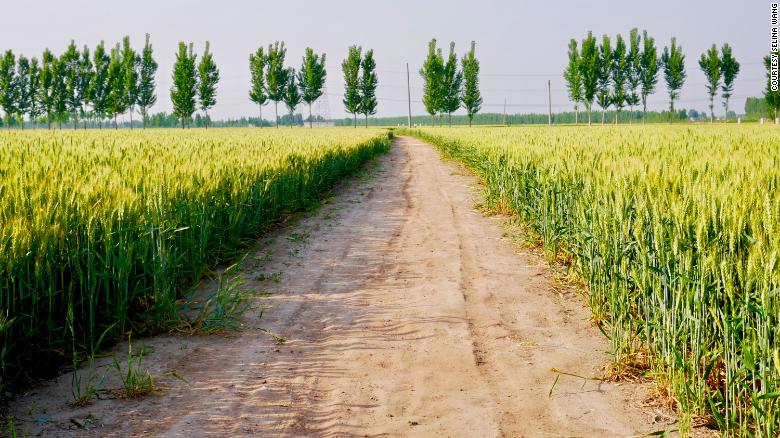 The difficult question for America's leadership now is how to effectively confront Beijing, without worsening discrimination at home against people who look Chinese. That means making clear distinctions -- for the public -- between the Chinese Communist Party, the 1.4 billion people in China, and millions around the world of Chinese heritage. 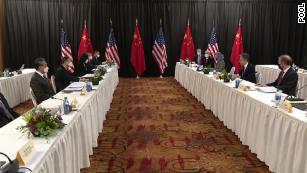 Chinese calls US 'condescending' in its tone in high-level meeting

"For as long as Asian Americans have been in this country, we've been treated as outsiders, as people who can't be trusted," said Lu, the former Cabinet Secretary. "You can go all the way back to the 1800s with Chinese railroad workers, to Japanese American internment during World War II, to the Korean and Vietnam Wars and to rising trade tensions with Japan in the 1980s."

As I see conversations between leaders of the world's two largest economies descend into childish bickering, I can't help but think about all the Asian American lives uprooted or lost as a result of geopolitical disputes that are out of their control.

I also think about the younger me, who just wanted to be accepted as American, and how hopeless she'd feel to know that, even today, she would be seen as the "other" -- no matter where she goes.