They issued photos of Cherif and Said Kouachi, said to be "armed and dangerous", and arrest warrants. A third suspect reportedly surrendered.France is holding a day of mourning for the 12 people killed in the attack.A minute's silence will be observed at midday across the country and the bells of Notre Dame in the capital will toll.Security forces carried out a major search operation in the eastern city of Reims overnight but no arrests were made. Police cordoned off a block of flats and forensic teams could be seen inside.The country has been placed on the highest terror alert and extra troops have been deployed to guard media offices, places of worship, transport and other sensitive areas.Vigils have been held in Paris and in cities across the world in tribute to those killed in Wednesday's attack. Many carried placards reading "Je suis Charlie" (I am Charlie) in solidarity with the victims. 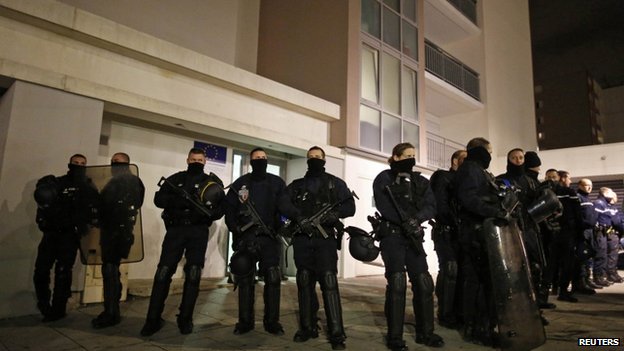 Eight journalists - including the magazine's editor - died along with two policemen, a maintenance worker and a visitor when masked men armed with assault rifles stormed the Charlie Hebdo offices.The magazine has angered some Muslims in the past by printing cartoons of the Prophet Muhammad. The offices were firebombed in 2011.The gunmen were heard shouting "we have avenged the Prophet Muhammad" and "God is Great" in Arabic ("Allahu Akbar").French media, citing police documents, initially named a third suspect as Hamyd Mourad, 18. However, it was later reported that Mr Mourad had handed himself in to police after seeing his name circulating on social media.